When the second check from Lindus is entered into evidence, Hank needs money fast for the down payment on his old house. The team goes after a bounty case to make a few bucks, but Montell turns out to have money hidden away from the Del Mar Window Job.


Montell also turns out to be played by Matthew Willig, who won a Super Bowl in his 14 seasons as an NFL offensive tackle and still somehow manages to look more terrifying than that image.
posted by Etrigan (4 comments total)
I am so sorry
posted by I-baLL at 7:57 AM on April 14, 2016

Sassy tarot reader is such a highlight: "I don't go down to where you work and slap the venti latte out of your mouth." I also love how Hank totally makes up the protection racket thing on the spot without warning Britt first and then goes, "Explain it to her, Joey."

And Hank's AA sponsor's reaction to his buying the house!

Britt's view that he and Hank need a mascot to make their branding distinctive.

Oh, and we can't forget Biscuit the teabagging dachshund.
posted by FelliniBlank at 2:09 PM on April 14, 2016 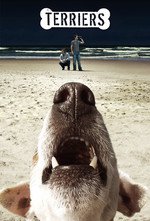