A pair of NYC cops in the Narcotics Bureau stumble onto a drug smuggling job with a French connection.


The French Connection is a 1971 American dramatic thriller film directed by William Friedkin and produced by Philip D'Antoni. It stars Gene Hackman, Fernando Rey, and Roy Scheider. The film was adapted and fictionalized by Ernest Tidyman from the 1969 non-fiction book by Robin Moore. It tells the story of New York Police Department detectives, "Popeye" Doyle and Buddy "Cloudy" Russo, whose real-life counterparts were Narcotics Detectives Eddie Egan and Sonny Grosso. Don Ellis scored the film. (wikipedia)

• It was the first R-rated movie to win the Academy Award for Best Picture since the introduction of the MPAA film rating system.

• Friedkin notes that the film's documentary-like realism was the direct result of the influence of having seen Z, a French film. The film was among the earliest to show the World Trade Center: the completed North Tower and the partially completed South Tower are seen in the background of the scenes at the shipyard following Devereaux's arrival in New York.

• Though the cast ultimately proved to be one of the film's greatest strengths, Friedkin had problems with casting choices from the start. He was strongly opposed to the choice of Hackman for the lead, and actually first considered Paul Newman (out of the budget range), then Jackie Gleason, Peter Boyle and a New York columnist, Jimmy Breslin, who had never acted before. However, Gleason, at that time, was considered box-office poison by the studio after his film Gigot had flopped several years before, Boyle declined the role after disapproving of the violent theme of the film, and Breslin refused to get behind the wheel of a car, which was required of Popeye's character for an integral car chase scene. Steve McQueen was also considered, but he did not want to do another police film after Bullitt and, as with Newman, his fee would have exceeded the movie's budget. Tough guy Charles Bronson was also considered for the role. Friedkin almost settled for Rod Taylor (who had actively pursued the role, according to Hackman), another choice the studio approved, before he went with Hackman.

• The plot centers on drug smuggling in the 1960s and early '70s, when most of the heroin illegally imported into the East Coast came to the United States through France. In addition to the two main protagonists, several of the fictional characters depicted in the film also have real-life counterparts. The Alain Charnier character is based upon Jean Jehan who was arrested later in Paris for drug trafficking, though he was not extradited since France does not extradite its citizens.

• The film is often cited as containing one of the greatest car chase sequences in movie history. The chase involves Popeye commandeering a civilian's car (a 1971 Pontiac LeMans) and then frantically chasing an elevated train, on which a hitman is trying to escape. The scene was filmed in Bensonhurst, Brooklyn roughly running under the BMT West End Line (currently the D trains, then the B train) which runs on an elevated track above Stillwell Avenue, 86th Street and New Utrecht Avenue in Brooklyn, with the chase ending just north of the 62nd Street station.

• The most famous shot of the chase is made from a front bumper mount and shows a low-angle point of view shot of the streets racing by. Director of photography Owen Roizman, wrote in American Cinematographer magazine in 1972 that the camera was undercranked to 18 frames per second to enhance the sense of speed. Roizman's contention is borne out when you see a car at a red light whose muffler is pumping smoke at an accelerated rate. Other shots involved stunt drivers who were supposed to barely miss hitting the speeding car, but due to errors in timing, accidental collisions occurred and were left in the final film.

• The early scene where Doyle and Russo chase down a drug dealer with Doyle dressed in a Santa Claus suit is based on a real-life tactic used by Eddie Egan and Sonny Grosso. While on stakeouts in Bedford-Stuyvesant, Egan and Grosso discovered drug dealers could easily spot undercover cops, and would often flee the scene before the cops could arrest them. One Christmas, Egan came up with the idea of dressing in a Santa Claus suit, figuring the dealers would never suspect Santa Claus of being a cop.

• The scene where Doyle and Russo chase down the dealer near the beginning and Gene Hackman shouts out his famous question "Did you ever pick your feet in Poughkeepsie?" is based on actual "good cop/bad cop" interrogations by the real "French Connection" detectives, Eddie Egan and Sonny Grosso according to William Friedkin in the DVD commentary. Grosso would gingerly ask a suspect direct questions about his crimes, then Egan would always butt in and yell unusual questions like the Poughkeepsie one. The suspect would get so rattled by Egan's offbeat questioning that he felt more comfortable answering Grosso's, thus, tending to eventually incriminate himself.

• According to William Friedkin, the significance of the straw hat being tossed onto the shelf of the rear window in Doyle and Russo's car was that at that time it was a universal signal in New York City that the undercover cops in the car were on duty.

• Having participated in the making of this film, detective Eddie Egan decided to retire from NYPD and start a career in Hollywood. The NYPD, however, brought charges against him for minor errors in reporting and handling of evidence. In Egan's trial director William Friedkin testified on his behalf and Roy Scheider was also present. Egan was dismissed from the police force just hours before his retirement, and his pension was taken away. The decision was later appealed in court and reversed.

• All of the extras used in the first bar scene were real-life police officers.

• According to William Friedkin, Gene Hackman had a hard time saying Doyle's racist language without cringing.

• The principal car chase scene was widely considered to be the best ever put on film at the time, overtaking Bullitt (1968) for that honor. William Friedkin later attempted to outdo himself with a chase sequence in To Live and Die in L.A. (1985).

• The traffic jam on the Brooklyn Bridge was shot without permission.

• Before the chase scene begins, Doyle attempts to stop two cars: a green Volkswagon and a light blue Mercury coupe. During the chase, the same Mercury rams Doyle's car.

• Ernest Tidyman only added the now-legendary car chase sequence to the screenplay when no studio in town would touch it.

only person to look good in a porkpie hat that isn't actively engaged in playing jazz.
posted by leotrotsky at 4:23 AM on May 7, 2016 [1 favorite]

I first saw this movie in a double-feature with Dirty Harry, which was quite the contrast. The deliberately-paced procedural versus the unhinged rant. Seems like DH wound up being more influential on future cop films, much to the genre's (and world's) disservice.
posted by tobascodagama at 7:10 AM on May 7, 2016

A better double-feature would have been French Connection and The Seven-Ups, I think. Or, maybe Serpico.

FC is a great, great film. Gritty and shot on location and full of strong performances. And, IMHO, it stands up well even today. I think it helps that it was based on a true story.
posted by Thorzdad at 11:29 AM on May 7, 2016 [2 favorites]

I think the double-feature was an accident of both films being released in 1971. IIRC, it was a part of a broader repertory series on 70s crime films that did include Serpico.
posted by tobascodagama at 12:39 PM on May 7, 2016

The sequel is ... odd. It feels like 20 percent of the film is just Doyle being really mean to French cops and the rest is him recovering from a heroin addiction. Needless to say, French Connection 2 is not well-remembered or frequently discussed.
posted by maxsparber at 9:11 PM on May 7, 2016 [1 favorite]

I had some difficulty just WATCHING the racist dialogue.
posted by Chrysostom at 7:59 PM on May 8, 2016

I stumbled upon this film in the bargain bin at my local Seven Eleven, of all places, and brought it home to watch knowing nothing about it. There's a lot I like about it, like the chaotic soundtrack and all those pretty, silent establishing shots, but the protagonists are just so loathsome and bad at their jobs that I have absolutely no sympathy for them. Of course, in true police tradition, even after their monumental, easily preventable fuckup at the end of the film, they just get a slap on the wrist and a reassignment in the epilogue.
posted by J.K. Seazer at 1:13 AM on August 24, 2019 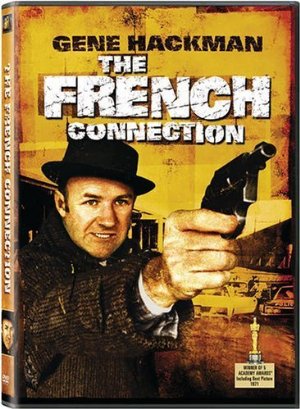