A fiercely independent cowboy arranges to have himself locked up in jail in order to then escape with an old friend who has been sentenced to the penitentiary.


Film Comment: Its hero, flawlessly portrayed by Kirk Douglas, is John W. Burns, a cowboy anarchist who carries no ID, respects no authority, and pays attention only to his friends and his horse. Breaking into jail to see a friend, he attracts the attention of dogged cops, a vindictive sheriff, a one-armed Okinawa veteran, and a hot-shot military helicopter pilot, all of whom instinctively want to take him down.

They don’t. Always polite, always fair, always a “fuck you” to those above him, the brave cowboy eludes his pursuers and almost makes it to Mexico and freedom. What happens to him and to Whiskey, his magnificent, proud horse, is as tragic, as it is stupid, as it is inevitable.

NYTimes(Alex Cox, although the author of the Film Comment article): “The Brave Cowboy,” shot as “The Last Hero,” was released in 1962 as “Lonely Are the Brave” — elegantly photographed, theatrical rather than “natural,” exuberantly acted, deftly paced. There is no greater western, and certainly no more tragic one. Despite his doubts Mr. Douglas personified Burns, flouting cinematic rules by doing his own stunts and co-starring with an animal, a high spot of his career.

It’s hard to imagine a film so radical, or so pessimistic, being made today. Though a Korean War hero, Burns refuses to carry ID or listen to reason. He disrespects the power company by cutting its barbed-wire fences; the county jail, by breaking out; the sheriff, whose manhunt he eludes; the military-industrial complex, whose helicopter he shoots down; and us, the viewers, who — when the lights go up or the DVD ends — return to a life played mainly by the rules. Remarkable for a low-budget western, “Lonely Are the Brave” poses uneasy questions about the idea, and value, of heroism. Do Paul’s principles justify abandoning his wife and child? Where does Burns’s extraordinary journey lead?

mysteryfile.com: While Lonely are the Brave will never likely achieve the same sort of canonical status as the work of auteur directors such as Budd Boetticher, John Ford, and Anthony Mann, that doesn’t mean that it isn’t worthy of such high aesthetic consideration. Indeed, the film holds up exceedingly well over fifty years after its initial cinematic release. Some may find the theme of the anachronistic cowboy to be overdone and trite, but in my estimation this generally unheralded film is able to both utilize, and build upon, this theme without falling into either pathos or cliché. 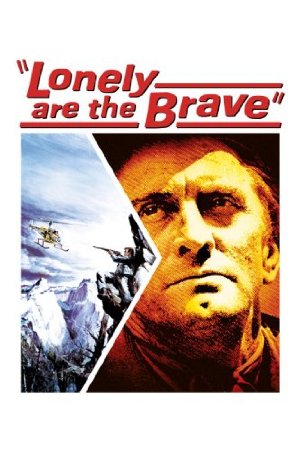