NYTimes: Some of it is shoddy and gross and cruel; the rest is funny in an entirely unexpected way. It has the episodic, revue quality of so much contemporary comedy—not building laughter, but stringing it together skit after skit, some vile, some boffo. It is less delicate than Lenny Bruce, less funny than Doctor Strangelove, but much funnier than The Loved One or What's New, Pussycat?

Roger Ebert: The movie was like a bomb going off inside the audience's sense of propriety. There is such rapacity in its heroes, such gleeful fraud, such greed, such lust, such a willingness to compromise every principle, that we cave in and go along.

Their formula for failure is a musical named "Springtime for Hitler," with a dance line of jackbooted SS girls and lyrics like, "Don't be stupid, be a smarty! Come and join the Nazi Party!" Their neo-Nazi playwright Franz Liebkind (Kenneth Mars) roars up to opening night on a motorcycle, wears a Nazi helmet into the lobby, and tells them, "It's magic time!" Reaction shots during the first act show the audience paralyzed in slack-jawed horror.

How did Mel Brooks, the writer and director, get away with this? By establishing the amoral desperation of both key characters at the outset, and by casting them with actors you couldn't help liking, even so. Like Falstaff, Zero Mostel's Max Bialystock is a man whose hungers are so vast they excuse his appetites. There is a scene where he scrubs his filthy office window with coffee, peers through the murk, sees a white Rolls-Royce and screams, "That's it, baby! When you've got it, flaunt it! Flaunt it!" You can taste his envy and greed. "See this?" he says to Bloom, holding up an empty setting. "This used to hold a pearl as big as your eye. Look at me now! I'm wearing a cardboard belt!" It is typical of this movie that after he says the line, he takes off the belt and rips it to shreds.

youngfolks.com: The sheer insanity that pours out of Zero Mostel and Gene Wilder in the first 20 minutes of The Producers will prepare you for the rest of the film. It is interesting to note that the first 20 minutes of the film take place in roughly one location but remains wildly entertaining. The Producers is one of the most risky and bat-shit crazy movies to come out of the 60’s. It is also of the most influential comedies to come out of Hollywood. Period. In a time when Hollywood looked at comedy as a lesser art form, it is reassuring to know that something as clever as The Producers ever made it out of MGM. Even if you or someone you know does not like this movie (I know many people who hate it), I doubt that you cannot at least find something you respect about this film. May it be the acting, the song and dance number, or the hilarious originality that would introduce the world to Mel Brooks.

Empire: The film's beloved production number, Springtime For Hitler, gives new meaning to the term "showstopper". Brooks cuts between showgirls scantily clad in pretzels, beer foam and Valkyrie accessories, to the slack-jawed audience, from goose-stepping chorus girls and tap dancing Stormtroopers back to the audience frozen in shock, to an overhead Busby Berkeley-like shot of dancers in swastika formation. Brooks wrote the song himself: "We're marching to a faster pace Look out, here comes the master race"

Vanity Fair: It took six years to bring the concept to the screen. Once Brooks had started to make the rounds with his 30-page treatment, he quickly found that all the major studio heads recoiled at the idea of Hitler as a comic figure. It was just too tasteless, too outrageous. So Brooks tried independent producers and found much the same reaction, until a friend set up a meeting at a coffee shop in Manhattan with an independent producer named Sidney Glazier.

This is one of my favourite movies of all time, and at one point I was word perfect on the first half - literally able to speak the lines along with the characters. I found the musical remake unbearable because they kept doing the lines wrong.

That opening section of Mostel and Wilder is absolutely fantastic. Beyond quotable, it deserves to be recited, the performances shooting from one emotional state to another in a kind of comedic pyrotechnics - just watch Wilder going from embarrassment to panic to amusement to hysteria.

I think Brooks' thesis - that the Nazis represented the triumph of the stupid, and that we shouldn't take them seriously for a moment, however tragically serious the repercussions of their beliefs and actions might be - is fundamentally sound.
posted by Grangousier at 4:04 AM on May 20, 2016 [7 favorites]

I love this movie SO MUCH. So many fabulous exchanges from "Shut up! This is a rhetorical conversation!" to "Have you ever EATEN with an ACTOR?" Mostel and wilder is just such a fabulous pairing. And just because somebody has to "Hitler was a wonderful painter. He could paint an entire apartment, one day, two coats."
posted by miss-lapin at 6:16 AM on May 20, 2016 [4 favorites]

I still don't understand why time and time again people think they can improve upon Gene Wilder.
posted by whuppy at 6:20 AM on May 20, 2016 [6 favorites]

Because people are idiots. That breakdown he has in the first five minutes of that movie is so absolutely brilliant.
posted by miss-lapin at 8:51 AM on May 20, 2016 [2 favorites]

The only part of The Producers that hasn't aged well is the character of Lorenzo St. DuBois. Not surprised they dropped him from the musical. That aside, there really isn't a bad frame in this film. Such a classic.

Brooks clearly had a thing about Hitler, who pops up all over Brooks's films. Aside from the Producers, there's an actor dressed as Hitler in the studio commissary scene in Blazing Saddles, there's the "Hitler on Ice" sequence in History of the World, Brooks plays a Hitler impersonator in To Be or Not to Be ("Hurry Schatzi, we'll be late"), and probably others I'm missing.

I'm sure it came from his time as a soldier in World War II, which doesn't come up nearly as much as it could. Mel Brooks, the scrawny, funny little city kid was a Combat Engineer in the Battle of the Bulge ("I was a Combat Engineer. Isn’t that ridiculous? The two things I hate most in the world are combat and engineering.”) before he got switched into a comedy show entertaining the other troops.
posted by Zonker at 6:54 AM on May 21, 2016 [5 favorites]

Brooks clearly had a thing about Hitler, who pops up all over Brooks's films.

But Brooks has also said: "I'm sure a lot of my comedy is based on anger and hostility. [I] learned to clothe it in comedy to spare myself problems...." I would imagine that, having lived through WWII, Brooks had some anger towards old Adolf.
posted by aureliobuendia at 11:18 AM on May 22, 2016 [3 favorites] 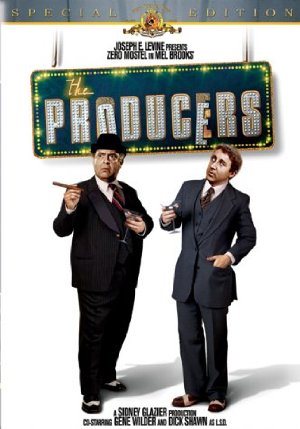