NYTimes: If you're not too squeamish at the sight of slaughter and blood and can keep your mind fixed on the notion that there was something heroic and strong about British colonial expansion in the 19th century, you may find a great deal of excitement in this robustly Kiplingesque film.

But the question is whether such a picture, coming at this time, with tensions and discords so prevalent, is discreet or desirable. Is it a contribution to the cause of harmony to show so much vicious acrimony between black men and white, to wallow in blood-spurting slaughter, to make an exciting thing of firing rifles into the faces of of charging warriors and sticking bayonets into them?

And is the ideal of the white man's burden, which this picture tacitly presents (for all its terminal disgust with the slaughter), in the contemporary spirit?

Empire: Far from being an Imperialist fable, Zulu carries a palpable anti-war message. The British soldiers are apolitical to a man, and the malingering Private Hook is downright subversive. "Did I ever see a Zulu walk down the City Road?" he sneers from his hospital bed. "No. So what am I doing here ?" After the battle, both Chard and Bromhead are consumed by self-disgust. "Do you think I could stand this butcher's yard more than once?" is Chard's verdict. "I came up here to build a bridge."

The Guardian: [W]e mustn’t let history get in the way of a good myth with po-faced academic studies. You only need to watch Zulu Dawn, the 1979 prequel about Isandlwana, to appreciate that. The film’s cast is stellar – it includes Peter O’Toole, Burt Lancaster and John Mills – but the historically accurate result is dreary. Who wants to watch a painful British defeat unfold over two agonising hours? Not many people, apparently. It was a box-office flop. (The only stirring moment is when Lieutenants Melvill and Coghill die trying to save their regiment’s Colours – another two VCs, by the way.)

Zulu, by contrast, embraced the Victorian myth about Rorke’s Drift and gave it a new, blockbuster reinterpretation. Take Henry Hook, a leading character played by James Booth, who is a drunken malingerer in the film, confined to the hospital. “Hookie” redeems himself by saving the lives of the patients there and, in doing so, earns a VC.
The real Hook, however, was a teetotal Methodist and a model soldier. He was even awarded good conduct pay shortly before the battle, and his elderly daughter walked out of the film premiere in disgust at his portrayal.

The American director, Cy Endfield, was probably responsible for such artistic licence. He had been blacklisted in the US as a “Communist” in the early Fifties. So he came to work in Britain and – having chanced upon an article about Rorke’s Drift – relished the idea of turning it into an epic film. His friend Stanley Baker, who plays Lieutenant John Chard in the film, was happy to join the venture.

But the film didn’t come from these two men alone: Zulu is very much of its time. Thematically, you could say it’s roughly a Western, only with British soldiers for cowboys and Zulus for Indians. Baker and Endfield acknowledged as much: because many of the 700 Zulus hired as extras for the film had never been to a cinema before, the two men set up a projector in order for them to watch a Western starring Gene Autry. After that, the Zulus understood their precise role – to make lots of noise and fall over when shot. (They were reportedly paid for their work in cattle.)

Baker and Endfield could just as easily have put on 55 Days at Peking, which was released in 1963 and dramatises the siege of the foreign legations’ compounds in Peking during the Boxer Rebellion. Or The Alamo (1960), with its siege and gripping finale. Khartoum, another imperial era epic, was released a couple of years later in 1966.

Zulu, however, is a superior film to them all – which is why so many of us watch it every Christmas at home. Indeed, its extraordinary impact was highlighted this week by a museum curator, Bill Cainan, in Brecon. There, at the regimental museum of the Royal Welsh, the mementos of the battle are on display, including 10 of the 11 Victoria Crosses won at Rorke’s Drift. Mr Cainan is trying to prevent the museum’s closure.

He says: “Zulu is both a blessing and a curse. If it wasn’t for the film, it would be another forgotten foreign war.” But, he admits: “It’s a curse because most people seem to think it’s a documentary, which of course it isn’t.”

The untold story of the film Zulu starring Michael Caine, 50 years on

The Making of Zulu
posted by MoonOrb (7 comments total) 3 users marked this as a favorite
20-odd years ago there was a Caine retrospective at the Egyptian in LA and he was filmed for interviews. He said that he was the only one who wore his pith helmet properly; the other actors who had to wear them didn't and got sunburned.
posted by brujita at 10:14 PM on May 26, 2016 [1 favorite]

The first time I ever saw this picture was on Award Theater hosted by Bill Tush on Channel 17. I must have been about 10. Lost in Space was over, and when Bill said the movie that morning was going to be Zulu, Dad said, "Oh! That's a good one." My brother and I watched it with him and we've loved it ever since.

We just re-screened it on DVD in the last week or two. I was a little surprised at the length of the ceremonial dance sequence at the beginning. I guess they usually cut most of it out for TV in the U.S. because of the partial nudity.

For me, the reason to watch this movie is the scene at the end. The Zulus sing their song. The Welshmen sing "Men of Harlech" back at them. The final assault begins. Chard tells the bugler, "Spit, boy! Spit!" "Front rank, fire! Second rank, fire! Third rank, fire!" The list of Victoria Cross winners. It's just a cracking war movie.
posted by ob1quixote at 3:27 AM on May 27, 2016

I love this film and like Stanley Baker's wife says in the Making of documentary, if you sit down to watch ten minutes, you end up staying for the whole movie.

This is one of Patercallipygos' favorite movies as well, and it's all because of that last Attack on Rorke's Drift "forth eorlingas" scene.
posted by EmpressCallipygos at 1:03 PM on May 27, 2016 [1 favorite]

I believe this movie is one of the earliest entries in my "movies I'd like to see that were recommended on Metafilter." I'll have to track it down!
posted by rhizome at 1:41 PM on May 27, 2016

The casting was really terrific. I was amused at how Michael Caine's character becomes progressively less posh--deliberate or no?

Also, the missionaries were, to me, weirdly sinister. Were they based on actual people or added for dramatic effect?
posted by orrnyereg at 8:38 AM on May 29, 2016 [1 favorite]

The missionaries were based on actual people with some dramatic licence aparently.
posted by poseathon at 6:09 PM on May 29, 2016 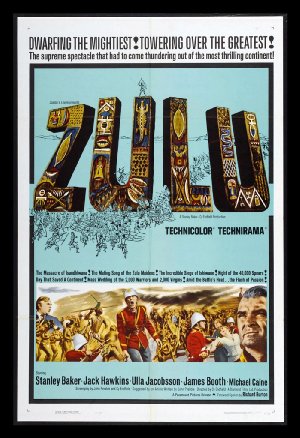