A one-handed stranger comes to a tiny town possessing a terrible past they want to keep secret, by violent means if necessary.


Culture Court: This is a western by any other name, although if it was in black and white it could be considered film noir. The one-arm stranger arrives in town, not on a horse or in a stage coach, but on the big art deco diesel train, The Streamliner, which makes an unscheduled stop just for the occasion. Black Rock is a one-horse town lost in a time-warp, extending at right-angles from the tracks which, in the omniscient aerial shot, seem to extend across the harsh beauty of the Arizona desert into a wall of forbidding mountains. It's a world of rocks alright and the town could be a ghost town, except for its cast of xenophobes who carry on as if this is 1865, not 1945.

Bad Day At Black RockThis excellent drama exploits not only the expressionism of the natural surroundings but also the structural method of stage drama. The characters move and talk as caricatures in scenes that have the mannered exposition of live theatre. The effect is eerie, a theatre of menace, where the mystery of who and why they are compels us to keep watching.

Film School Rejects: This is absolutely a mash-up of Western and Noir (which I’ll go ahead and creatively call Western Noir), and it only works because the underlying feature of both is tension that leads to death. When played strictly for drama, the tight-lipped, quick with the quips stranger could be Mike Hammer just as easily as The Man With No Name. They are lone figures with a strict code to which they determinedly adhere. One pounds the pavement, the other pounds the prairie, so it’s fascinating to see the former dropped into a near-ghost town much in the same way it’s fun to watch the Coen Brothers do the opposite today.

Slant: The unassuming but forceful execution of purpose exhibited by Bad Day at Black Rock‘s John J. Macreedy (Spencer Tracy), a mysterious, no-nonsense WWII vet who exposes the titular town’s xenophobic secret, mirrors that of John Sturges, a mostly forgotten big-budget director whose diverse studio pictures were defined by their brawny, efficient craftsmanship and preoccupation with masculinity. Similar to Robert Aldrich and John Huston, two filmmakers with similar interests in classic, male-centric genres, Sturges knew how to move a story from point A to point B with a modicum of fuss and a healthy measure of gritty grace. Half a century later, his clean, evocative aesthetic and firm grasp of widescreen remain sorely underappreciated, and his wide-ranging body of work—from epics The Great Escape and The Magnificent Seven to his Hemingway adaptation The Old Man and the Sea and the Clint Eastwood starrer Joe Kidd—is characterized by a competent, workmanlike sturdiness that remains all-too-prominently absent in modern Hollywood pictures.

NYTimes: Quite as interesting as the drama, which smacks of being contrived, are the types of masculine creatures paraded in this film. Mr. Tracy is sturdy and laconic as a war veteran with a lame arm (which does not hamper him, however, in fighting judo style). Mr. Ryan is angular and vicious as the uneasy king-pin of the town, and Walter Brennan is cryptic and caustic as the local mortician with a streak of spunk.

Ernest Borgnine as a potbellied bully (he was Fatso in "From Here to Eternity"), Dean Jagger as a rum-guzzling sheriff, Lee Marvin as a dimwitted tough, John Ericson as a nervous hotel clerk and Russell Collins as a station-master are all good, too. The only female in the film is Anne Francis.

Bad Day at Black Rock: A Savage Score for a Great Film About American Hate

Trailer
posted by MoonOrb (4 comments total) 3 users marked this as a favorite
This is such an odd, enigmatic film. It's slyly captivating. On the face of it, it's not a film that would usually interest me, but, over the years, each time I happen upon it (usually on TCM) I can't help but sit down and watch.

I'd love to know what sort of person Robert Ryan was offscreen, as he's really, really good at playing detestable assholes onscreen.
posted by Thorzdad at 6:21 AM on June 4, 2016

I'd love to know what sort of person Robert Ryan was offscreen, as he's really, really good at playing detestable assholes onscreen.

Ryan was a devoted husband and father, and an idealistic liberal who tirelessly supported civil rights issues. During the anti-communist attacks on Hollywood, he joined the Committee for the First Amendment. He donated money and services to organizations such as the ACLU, American Friends Service Committee, and United World Federalists. He was a co-founder of The Committee for a SANE Nuclear Policy's Hollywood chapter. He served in the cultural division of the Committee to Defend Martin Luther King.

Ryan's film casting often ran against the ideals and causes he embraced. He was a pacifist who starred in war movies, westerns, and violent thrillers, a fighter for civil rights who often played bigots. At a screening of Odds Against Tomorrow, he appeared before the press to discuss "the problems of an actor like me playing the kind of character that in real life he finds totally despicable."
posted by ubiquity at 11:00 AM on June 8, 2016 [4 favorites]

The screenwriter, Millard Kaufman, had previously been one of the creators of Mr Magoo. He had also been Dalton Trumbo's front for Gun Crazy. Since producer Dory Schary was an outspoken opponent of the HUAC, many people see the film a veiled indictment of the fear, apathy and avarice that permitted McCarthyism.

I think the scene when Tracy suddenly, unexpectedly and definitively turns the tables on Borgnine is one of the great moments in American cinema.
posted by ubiquity at 11:14 AM on June 8, 2016

A story I heard about Ryan that may be apocryphal but I hope it isn't: His agent called him and told him that Nicholas Ray wanted him for a role in King of Kings. Supposedly, he was shocked to learn a few days later that the role was John the Baptist, since he assumed that naturally Ray would want him to play Pontius Pilate.

Ryan is one of my three or four favorite actors; I'm always sad that the doesn't get much attention these days.
posted by holborne at 12:43 PM on June 8, 2016 [1 favorite] 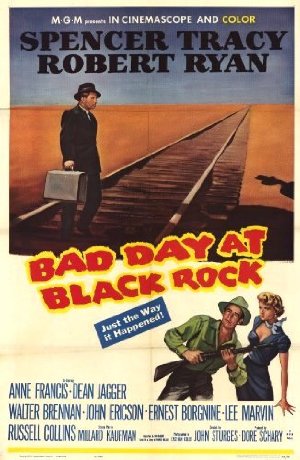