After failing to rescue D'avin, Dutch and Johnny head to Eulogy in the hopes of stealing a mysterious, high-tech shield.


Sorry it took me so long to post this!
posted by rednikki (12 comments total) 1 user marked this as a favorite
No need to apologize! Just thanks for posting this and getting us started.

So, I'm not too sure what to make of this one either. I'm not really big on conspiracy-wrapped-in-another-conspiracy-wrapped in-a-mystery type of story telling, especially when it feels like a bit of bait and switch from the original premise.

Once again Johnny has to say good-bye (for now?) to a potential love interest. How many does that make it? I hope they give this idea a rest before it gets to be even older.
posted by sardonyx at 11:25 AM on July 3, 2016

I enjoyed this! I loved how they just dived in and got on with the story, appreciated the new character, and liked the peeling back of one layer of conspiracy to reveal a bigger story.

Given the way they left things, I strongly suspect we'll be seeing that potential love interest again. Yay.
posted by coriolisdave at 3:27 PM on July 3, 2016 [1 favorite]

io9 - How the Creators of Dark Matter and Killjoys Are Raising the Stakes for Their Second Seasons (set visit, nothing particularly spoilery for Killjoys beyond the premiere I don't think, no opinion on the Dark Matter portion as I'm not watching that show)
posted by oh yeah! at 5:47 PM on July 3, 2016

Pree/Johnny was great - the collective gasp of shock from the criminals at Johnny's insult and the "You don't disrespect your man's mother! What's wrong with you?" was the best. There were a lot of great lines in this episode though - "We're outnumbered by a factor of holy times shit." was a favorite, but Pree had a bunch of good lines, and the Dutch/Clara/Alice gunfight was beautiful.

I've forgotten a lot of the details of season 1 (totally blanking on who Fancy is/was), but judging by the way this episode grabbed me, I think I'll be paying closer attention this season. Might need to give S1 a quick rewatch binge though.
posted by oh yeah! at 6:14 PM on July 3, 2016 [3 favorites]

(totally blanking on who Fancy is/was)

He was another Killjoy like Dutch and Johnny. Good at his job but kind of an asshole. Last season he occasionally worked together with them but more often was the competition they were racing against to complete a contract.

Queen of the "SAVE FANCY" society right here, and under_petticoat_rule is the king. That little twist (with the knife) at the end makes me think he's a Level 6, but he's Klein's level six.

110% on board all the way through. Love having Pree be part of the team - he is a blast. Love Clara. Loved that Clara seemed like she could be a love interest for either Dutch or Johnny. Dutch, as usual, kicked much ass. Love the fact that they were still dealing with everything bad that happened last season. I like that D'avin is special somehow and can defeat the Level 6 green goo. And I actually like the idea that Klein is not the head of the bad guys but is operating on his own. Loved having D'avin call Klein out on his "daddy issues" with Dutch.

I can't wait to see where this show goes.

Also, someone please cross this over with Orphan Black so that Pree and Felix can hook up.
posted by rednikki at 8:37 PM on July 3, 2016

He was another Killjoy like Dutch and Johnny. Good at his job but kind of an asshole.

Not really "kind of" though - there was an episode last season in which Fancy explicitly owns being not just an asshole, but the asshole.

I liked this episode a lot. I hope Pree continues to have an expanded role. I also hope Clara and Alice come back soon.
posted by under_petticoat_rule at 9:43 PM on July 3, 2016 [1 favorite]

I'm so glad this is back! I agree with sardonyx above that the conspiracy-within-a-conspiracy plotline is a bit hokey, but it was creeping through the last season so I accepted it. Killjoys is always at its best when it's disguising how clever it is under cotton candy and popcorn, anyway. I really enjoyed Johnny and Pree's interplay in the casino - the writers seem to enjoy writing the same-sexy bits, and the cast just run with it.
posted by prismatic7 at 11:05 PM on July 3, 2016

there was an episode last season in which Fancy explicitly owns being not just an asshole, but the asshole.

Yeah, I loved that little speech! But I feel like the fact that he's deliberately, intentionally being the asshole because someone needs to be "that guy" somehow makes him...less of an asshole, in a strange way? Like underneath his asshole exterior there's a soft gooey center, or at least, a slightly-less-of-an-asshole center. I imagine Fancy is pretty chill when he's on vacation away from all the other Killjoys. Or was before he got Level 6'd, anyways...
posted by mstokes650 at 11:11 PM on July 3, 2016 [1 favorite]

Thanks, as well, for posting this. I didn't know it was back until I got home from the weekend holiday trip and discovered it resting on my DVR (Now that was a 4th of July treat).

I could have used a slightly longer "Here's what happened before" montage before we just jumped back into the story, as it took me probably half the episode to recall what had happened before in its entirely. But once I was settled, I was enjoying my Killjoys once again. I wonder if Klein was originally intended to truly be the big villain, but became such an interesting character that a larger conspiracy was created to make him something of an anti-hero. I admit, I enjoy seeing him on the screen, even if he's being god awful in some respect to Dutch or someone else.

For D'avin, are we essentially assuming it's the military experiments that were conducted on him that's keeping the Level 6 goo from working its magic?

Prim was a great addition to the group, and well, he didn't have much else to do after his bar was blasted into smithereens. I'm looking forward to learning more about his criminal past.

The mother joke was just perfect, the room simply going quiet in shock and outrage. One of the best televised jokes I've seen in a while.

I admit, I was pretty disappointed to see Clara step off screen at the end. I want her back, one to help equalize the male/female ratio, two, because she kicks ass, and three, she creates this interesting dynamic of having almost as intimate a connection to Lucy as Johnny - which could lead to some great dramedy or something.

The only sad thing about this episode is that it represents the start of a shorter season than last. I'll just assume the condensed season (we lost three episodes from last year) will simply result in better storytelling.
posted by Atreides at 9:42 AM on July 5, 2016 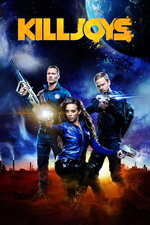