Lucas, Mike and Dustin try to talk to the girl they found in the woods. Hopper questions an anxious Joyce about an unsettling phone call.


Lucas, Mike and Dustin take the girl back to Mike's house. There, she reveals her name is 011 by showing Mike a tattoo on her arm. At Will's home, Joyce, his mother, reveals she received a phone call from Will. Shortly afterwards, her phone shorted out. Scientists from the Laboratory, eavesdrop on a phone call between Joyce and Florence, police dispatcher. Afterwards, they go to Joyce's home in Hazmat suits and radiation detectors and see a substance oozing from the walls. Back at Mike's home, Mike and 011 (El for short) sees Will's picture and points him out. When Lucas and Dustin show up at Mike's house and threaten to tell his Mother about her, she reveals she has telekinesis.

While searching for Will, Chief Hopper discovers a tag of clothing (from El's hospital gown) in a large drain pipe, leading to the Laboratory. Nancy, Mike's sister, goes to a party at her boyfriend, Steve, home. Meanwhile, in the woods Jonathan, Will's brother, is taking pictures where Will's bike was found. Upon hearing screams, runs into the forest and sees Steve, Nancy and friends, hanging out near the pool. Shortly afterwards, Barbara, Nancy's friend, alone outside, goes missing. Joyce receives another phone call from Will and starts hearing music coming from his room. Then she witnesses something trying to come through her walls. After running out, she goes back in when she hears more music.
posted by Fizz (28 comments total) 3 users marked this as a favorite
Interesting twist on the 'Last Girl' trope, having the monster(?) take Barb while Nancy was upstairs doing the deed that would doom her in any slasher flick. I was expecting Barb to get home safely and then have to be the one reporting Nancy missing the next day. It's only episode 2, so probably bad things are in store for Nancy anyway, the lie about the assembly is bound to be exposed, what with Jonathan's photos. But it was still unexpected.

Afterwards, they go to Joyce's home in Hazmat suits and radiation detectors and see a substance oozing from the walls.

This episode felt very much like it was channeling E.T. The whole 'bring a strange being into your home and show that being your Star Wars toys'. It was a bit on the nose. But, it's still fun and a little bit eerie. Chief Hopper also starts to get a bit more fleshed out as a character. A character that I didn't think I'd enjoy but was built up in each episode in a very good way.
posted by Fizz at 12:54 PM on July 17, 2016

A big thumbs down to the foley artist, who gave the camera a motor-drive sound, while it clearly shows Jonathan manually advancing and rewinding the film. (I don't believe there ever was a motor drive for the Pentax K1000 anyway).
posted by 1970s Antihero at 12:56 PM on July 17, 2016 [11 favorites]

You are correct. Though, I did a little googling and I found one that does have a motor but it seems to be a custom kind of job.
posted by Fizz at 1:14 PM on July 17, 2016

Also, that mix tape was just a bit too cool for a hesher kid the outer suburbs of a midwestern city in 1983. The Clash? Sure. Joy Division? I could buy that too. But The Smiths? In 1983, The Smiths were still performing around Manchester, and had only released a few singles, including "Hand In Glove," and "This Charming Man." There first US hit, "How Soon Is Now," wouldn't even be released until 1985 (OK- technically it was originally a b-side to the single for "William, It Was Really Nothing" single in '84). Remember, this is before the internet, so either Jonathan is making frequent trips to the UK, or hanging out at a really clued-in record store.

%n: "A big thumbs down to the foley artist, who gave the camera a motor-drive sound, while it clearly shows Jonathan manually advancing and rewinding the film."

Also no sound of the flash charging and how the hell don't the people at the pool notice someone taking flash pictures of them.
posted by Mitheral at 7:38 PM on July 17, 2016 [7 favorites]

Seriously good god does he not have any batteries in that flash and just feel the need to keep it attached for weight training purposes or what
posted by DoctorFedora at 10:16 PM on July 17, 2016 [4 favorites]

Remember, this is before the internet, so either Jonathan is making frequent trips to the UK, or hanging out at a really clued-in record store.

I can't speak for Indiana, but in Michigan late-night radio was a real thing. Between the Electrifying Mojo out of Detroit and student radio out of Ann Arbor, you could be exposed to a lot even if here was nothing but wheat and corn outside your front door.

Clustercuss, the older brother mentions them as being on the mix tape he gives to Will in a flashback. Regardless of how accurate their inclusion was, the whole "Mix tape from an older sibling" thing was so real to me. My best friend's brother was in college when we were in middle school and I was introduced to stuff like REM, TMBG, The Replacements, The Dead Milkmen, The Pogues, Siouxie and the Banshees, etc. through him. So many memories.

The music cues in this show in general are freaking great. I think this was the episode with the Bangles song as the end credits theme and it was just perfect.
posted by Rock Steady at 9:28 AM on July 18, 2016 [9 favorites]

I liked Winona better in this ep. than in the first, and they really did a good job of ramping up the tension in several scenes.
The protective mom, saying fuck this i am going after my son as she walks back into the house, was terrific.

I was ambivalent after the first episode, but this epi pushed it over into 'keep watching' for me. Nice music selection/audio effects.

That CGI extra-dimensional/breaking-through thing was amazing.

I am so totally going to have (worse) nightmares now.

A little Twin Peaks-y vibe-y; so many different personal plotlines woven around (what is probably) a common hypernatural phenomenon and a bit of titillation and/or oddness thrown in just for fun.

Someone> the Winon-iest we've seen Winona in a long time

Man, I was remarking to my wife during the scene of Barb and Nancy driving over that Barb was great, that she was clearly going to become the coolest and smartest English major at her college and then go on to be an excellent writer, and then.
posted by invitapriore at 9:45 PM on July 26, 2016 [4 favorites]

Also, how is the actress who plays El so good? Like, after having delivered lines consisting of a total of maybe four words she's already communicated this sense of being mentally decades older than the boys, but also relieved at having this space where she can maybe carefully be a child again, and then lapsing into trauma because of experiences that Mike can't possibly understand...she is really good.
posted by invitapriore at 9:59 PM on July 26, 2016 [15 favorites]

This is starting to feel like they fed the scripts from fifty 80s films into some Markov Chain python program and films the result. It's an OK series but it's getting a little tiresome picking out all of the references.
posted by octothorpe at 6:42 PM on July 31, 2016

I think this was the episode with the Bangles song as the end credits theme and it was just perfect.

Just made Netflix play to whole credit sequence so I could crank. that. UP!
posted by Frayed Knot at 8:48 PM on August 3, 2016 [2 favorites]

I was wondering if X-Men 134 was the first issue of X-Men I bought for myself, but I was off by a few issues. It is, however, the beginning of the "Dark Phoenix" storyline. Which features a young woman, Jean Grey, who is telekinetic and psychic and who comes under the influence of bad people who try to control her...

octothorpe: This is starting to feel like they fed the scripts from fifty 80s films into some Markov Chain python program and films the result. It's an OK series but it's getting a little tiresome picking out all of the references.

We watched two episodes in a row the first night, and we were hooked. The references felt more like place-markers, existing to set the stage but not spotlit as if to say "HEY LOOK, IT'S THE 80S." Sure, there's a play for/ on nostalgia, but all the actors have sold me and my wife on the story. If there was any winking, any "hey, remember this thing?" No outrageous 80s costumes. Actually, I'm really enjoying the whole color pallet - it feels like a series from the 80s without looking like it's all run through a filter. The "old tape filter" is left with the opening credits.
posted by filthy light thief at 8:10 AM on August 24, 2016 [1 favorite]

(And the forgotten link to TuneFind, which includes references to the scenes where the music was heard)
posted by filthy light thief at 11:09 AM on August 24, 2016

I'm late to the party but absolutely loving this. One thing that really stands out to me is how brilliant it is to see kids looking like kids, as opposed to heavily manicured and made-up fashion icons. Nancy and Barb actually look like they wash and style their own hair and do their own makeup - bizarre how unusual that is on telly these days. El just is, and is utterly awesome for it. It's such a subtle thing but not having the meta narrative of 'this is how you perform and/or subvert femininity' superimposed over everything gives the actors so much more room for their characters.
posted by freya_lamb at 8:37 AM on September 8, 2016 [11 favorites]

What made me decide to keep watching was the little dialogue at the beginning when Mike is talking to El for the first time.

"Eleven? That's your name? Eleven. Okay, um, well my name's Mike, short for Michael. Maybe we can call you 'El' short for Eleven?"

That's so gentle and thoughtful. He could have said, "Eleven's not a name! We gotta call you something else. We'll call you El." Instead he framed the nickname as a totally normal thing and asked her permission to use it. Just a little bit of hospitality making the world a little better instead of a little worse.

Rewatching in prep for the new season, and Barb is still the damn coolest.
posted by Existential Dread at 10:30 PM on October 14, 2017 [3 favorites] 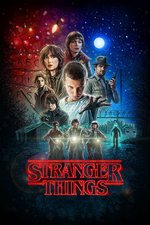