On Halloween, 1991, a popular high school basketball star ventures into the woods near Battle Creek, Pennsylvania, and disappears. Three days later, he’s found with a bullet in his head and a gun in his hand—a discovery that sends tremors through this conservative community, already unnerved by growing rumors of Satanic worship in the region. In the wake of this incident, bright but lonely Hannah Dexter is befriended by Lacey Champlain, a dark-eyed, Cobain-worshiping bad influence in lip gloss and Doc Martens...


The charismatic, seductive Lacey forges a fast, intimate bond with the impressionable Dex, making her over in her own image and unleashing a fierce defiance that neither girl expected. But as Lacey gradually lures Dex away from her safe life into a feverish spiral of obsession, rebellion, and ever greater risk, an unwelcome figure appears on the horizon—and Lacey’s secret history collides with Dex’s worst nightmare.

By turns a shocking story of love and violence and an addictive portrait of the intoxication of female friendship, set against the unsettled backdrop of a town gripped by moral panic, Girls on Fire is an unflinching and unforgettable snapshot of girlhood: girls lost and found, girls strong and weak, girls who burn bright and brighter—and some who flicker away.
posted by dysh (2 comments total)
I'm currently struggling through the last 40 pages of this and I haaaaaate it. I guess maybe I should wait until I finish for a final review, but I'm excited to have a place to talk about how much I hate it, I don't care if I get spoiled on the ending, and I don't know if I'll be able to bring myself to finish it, anyway.

Teenaged girls are not like this. They don't do these things, they don't talk like this. It's horribly overwritten and way too dramatic and none of the characters act like normal human beings, not even (or especially not!) the adults in their lives. Everyone is an implausible creep.

The phenomenal success of Gone Girl has created a whole market segment of books about unpleasantly sociopathic women, and most of them are not very good. This one seems to be smack in the middle of that trend. I'm ready for it to go away.
posted by something something at 7:39 AM on August 5, 2016

Ha, I actually loved this book! But then again, I am obsessed with female antiheroes and terrible teenage girls in particular. I thought it was beautifully written, and though the drama was A LOT at times (I have mixed feelings about the end, and about some of the sex scenes), I thought it encapsulated the overwhelming, explosive feelings of teen girl friendships and how fraught and manipulative they can be. And I did like the girls (at least some of the time)--they were terrible, certainly, but I thought they were well-drawn and even sympathetic characters at times, and before everything went to hell, made me miss that close intensity of female friendships that tend to fade as you get older, when adult romantic relationships and responsibilities take precedence. I read the book in a day, and am now having a hard time finding another book to read that draws me in like this one did.
posted by dysh at 6:50 AM on August 6, 2016 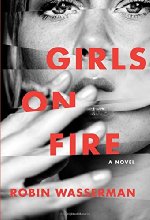