The Last Policeman is a 2012 American soft science fiction mystery novel by Ben H. Winters. It follows a police detective in New Hampshire as he investigates a suicide he believes was really a murder. His efforts are complicated by the social, political and economic effects of preparations for, and anticipation of, an asteroid impact six months in the future.


Of the novel, Slate said:
"It's likely no detective has ever felt smaller in the face of his fate than does Detective Hank Palace of the Concord, N.H., police department, the dogged center of Ben H. Winters’ sharp, funny, and deeply wise The Last Policeman. Palace may be investigating the death of a dull insurance man found in the bathroom of what used to be a McDonald’s one cold March morning, but he knows his detective work doesn’t really matter. After all, by October he’ll be dead. So will everyone in snowy Concord, everyone in New Hampshire, everyone in America, and everyone in the world. A six-kilometer-wide asteroid is bearing down, and it’s got a 100 percent chance of striking the Earth. Odds don’t get much longer than that.
"In the face of certain destruction, some American institutions are holding up better than others. McDonald’s, 7-Eleven, and Dunkin’ went bankrupt in the market panic that followed news of the asteroid’s flight path. (Panera survives, although the owners 'have undergone a meaningful spiritual experience and restaffed most of the restaurants with coreligionists, so it’s not worth going in there unless you want to hear the Good News.') Cellphone service is getting spottier and spottier as towers go unmaintained, the telecom employees cashing out and 'going Bucket List.' The Concord schools, on the other hand, have remained open, a dedicated staff continuing to teach quarter-full classrooms.
"The PD is doing pretty well, considering; they’ve lost a few to early retirement and suicide, but funding is up and habeas corpus has been suspended—for drug dealers at least—thanks to the Impact Preparation Security and Stabilization Act. It’s just that no one really cares about solving murders when you’re busy Preparing for Impact. And how, exactly, do you Prepare? One of Palace’s colleagues likes to say that 'sometime around late September they’ll start handing out umbrellas.' "

This mysterious goodreads user said:
"This book is the best kind of science fiction. Good Science Fiction, or 'Speculative Fiction', shows Humanity through some lens. The story might take place a long time ago in a galaxy far, far away but ultimately the story tells us something about humanity. So what would the world be like in the face of certain destruction? Would governments crumble, or enact legislation to try and maintain the status quo right up until the moment the lights go out? Would people go insane? Pretend it's not going to happen? Try to make the best of the time they have left? Pin their hopes on unlikely government survival conspiracies? This book explores all these topics, in addition to unraveling a murder.
"Now, don't take all this to mean the book is perfect. It follows a fairly predictable whodunit formula, replete with mysterious happenings and femme fatales. Naomi Ettis, the fatale in question, is an attempt to make a dame that doesn't fit the noir-mal formula. She still comes off as exotic, which is smack dab in the norm for such a character. Hank Palace himself is solidly in the hard-nosed detective mold, I can imagine a scene where the chief takes his gun and badge and throws him off the case only for him to carry on alone if anyone in the book cared about anything like that. Apart from these two, most of the other characters are pretty one-dimensional, or worse. Cynical Cop, Eager Cop, Grumpy Coroner, Beleaguered Boss, the list goes on and on, and it's only the twist of their impending doom that makes many of these characters worth being interested in.
"Luckily for us, the premise for the novel more than carries it across its by-the-numbers plot like a 6 kilometer asteroid across the night sky. We can see it coming a long way away, but it's still spectacular."
posted by Mr.Encyclopedia (7 comments total) 5 users marked this as a favorite
This might end up sounding sort of trite, but one thing I remember liking about this book is how by compressing the end of the world down to just a few months away, we get to see how different people act in the face of impending meaninglessness. The question we all pretty much have to put aside in order to get on with our lives -- what, ultimately, is the point of any of this, of doing anything at all -- becomes unable to ignore. And so the draw of the protagonist is that, faced with this inevitable meaninglessness, he nonetheless feels the importance of civic-mindedness for its own sake; it won't matter in x # of months or years or decades, but it nonetheless feels right to do right -- his attitude toward inevitable death (our own, our children's, their children's, eventually everything) mirroring most of our own.

(Teasing this out, it strikes me this ends up activating a not too uncommon spec. fiction trope: the protagonist, in a world with rules different from ours, strikes out against his/her milieu by carrying the banner of our own present world's values. A lot of times when it's explicit it's sort of silly and reactionary -- think of Logan's Run: how cruel that we can't live our lives the way you, the reader, live yours! But here it's sweet. There's no pretend revolution. Just reveling in whatever ordinariness there is left.)
posted by nobody at 5:34 PM on August 4, 2016 [1 favorite]

You will cry at the end of the trilogy.

This novel takes the "what would you do if the world were about to end" a step further, by hinting at, "how would everyone act if they accepted that true inevitibility of their own death?" While that thought can be pretty bleak, some embrace the final months with grace and even enjoyment.

But lots of people go batshit.

Liked it a lot - yet! - was disappointed by the ending. I'm not sure what I expected, but I was hoping it was something other than it was.
posted by bitterkitten at 7:46 PM on August 4, 2016

You will cry at the end of the trilogy.

I definitely did. I thought the first book was just-about-perfect, for what it is: a pulpy sci-fi/detective mashup. The premise really does carry it, even through its weak spots. The idea of a society that still functions, in a sense, when there really is no hope and no future, is just too good to resist, and the boy-scout protagonist who does what he feels is right and just in the face of utter chaos is the right choice to make.

If Palace had been anything other than pure-white-hat, I don't think the conceit--that he was willing to go through the wringer to do a job that could only provide the bare minimum of spiritual comfort to anybody--would have worked.
posted by uncleozzy at 7:50 AM on August 5, 2016 [1 favorite]

The premise really does carry it, even through its weak spots.

Yes, this is how I felt. I enjoyed the book, though the mystery/plot/narrative elements just weren't quite strong enough to convince me to read the sequels. I thought the protagonist characterisation was well done. He had to be that kind of guy to make the book at all plausible, and I felt like Winter sold it convincingly.
posted by smoke at 3:59 AM on August 8, 2016

I thought the world-building was a bit weak. I found myself thinking over and over that this bit or that bit about the slow collapse of civilization wasn't convincing. I just finished Winters' Underground Airlines, which is an alt-history about a United States where the Civil War never happened, and slavery is still practiced in four southern states. There is a lot to commend about it, but it had some of the same problems, to my mind, of the the world-building having these jarringly unconvincing moments. In particular, certain bits of black culture still exist—Michael Jackson is still a big singing star, and Zorah Neale Hurston still wrote books. But how do you get Jackson and Hurston without, say, the Great Migration and/or the Harlem Renaissance? This kind of thing didn't detract too much from my enjoyment of Winters' books but I did notice it.
posted by not that girl at 4:13 AM on August 8, 2016

I enjoyed this series, in no small part because I was tickled by the thought "well, hard to get much more noir than everyone is going to die".

Am I the only one who spent a lot of the first book wondering if we were supposed to think Palace is on the autism spectrum?
posted by phearlez at 6:55 PM on August 10, 2016 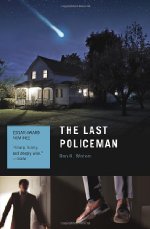