Get tickets to MeFi Events' Book Week! | Join us on Dec 4: Writing Fast and Dirty, writing + selling a debut novel to world's largest publisher | Part of our ongoing fundraiser

Cult Film Club: Step back into the psychedelic ’60s in this sexy, hilarious parody of Valley Of The Dolls, co-written by Roger Ebert. When three fun-loving bombshells with a rock band head for Hollywood to make it big, they find themselves at a hedonistic love-in thrown by an eccentric music promoter. Soon, it seems, superstardom is within reach. That is, if their newfound distractions don’t get in the way!

Will Ferrell to play Russ Meyer?

Roger Ebert on writing the film: We wrote the screenplay in six weeks flat, laughing maniacally from time to time, and then the movie was made. Whatever its faults or virtues, "Beyond the Valley of the Dolls" is an original -- a satire of Hollywood conventions, genres, situations, dialogue, characters and success formulas, heavily overlaid with such shocking violence that some critics didn't know whether the movie "knew" it was a comedy.

Russ Meyer on the film: (NSFW) I later learned that Zanuck was telling people that he hated Beyond the Valley of the Dolls, he wished it were never made, that he was embarrassed by it and so on. At the time, of course, I got notes saying, "Good show. Glad to see your red Cadillac on the lot on Sunday. I know you're working. Press on." It's so treacherous.
posted by maxsparber (3 comments total) 2 users marked this as a favorite
You will drink the black sperm of my vengeance!

Love this movie. It's my happening, and it's freaking me out.

The soundtrack is particularly great. I especially like Look On Up at the Bottom and Come With The Gentle People.
posted by painquale at 5:29 AM on September 9, 2014 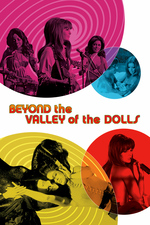