From the co-creator of the landmark series, the story millions of fans have been waiting to get their hands on for 25 long years. The Secret History of Twin Peaks enlarges the world of the original series, placing the unexplained phenomena that unfolded there into a vastly layered, wide-ranging history, beginning with the journals of Lewis and Clark and ending with the shocking events that closed the finale. The perfect way to get in the mood for the upcoming Showtime series.


This is essentially an epistolary novel, told through letters, photographs, postcards and other documents from throughout the history of the town of Twin Peaks which attempts to put it inside a wider frame of reference; deepening the mythology and weaving in wildly different parts of American history.

It's not so much a chronological bridge between the original series and the 2017 season as it is an exploration of the strange phenomena in the show, while examining some of its characters' histories and stories in a way that may set up ongoing dramatic conflicts in the new show.

This is a creation of Mark Frost alone; he's said in various interviews that David Lynch was not involved in the book because he was so busy with the new series. I don't know how much Lynch had to do with the original spin-off products, though the Secret Diary of Laura Palmer was written by his daughter, Jennifer. Some of this new book references details from the Access Guide to Twin Peaks, which was filled with miscellania about the towns' history and published during the original series' run.

There are some strange narrative inconsistencies between this book and the show, but I recommend this podcast discussion about the book and the mysteries contained within. I certainly had issues with the notable "errors" but I definitely think much of this is deliberate and requires deciphering. Which seems fitting for a book based on Twin Peaks.
posted by crossoverman (6 comments total) 5 users marked this as a favorite
I'm about 80 pages into it. It's neither the odds-and-ends coffee table book I feared nor the rich novel that I had hoped for. It is definitely a book aimed at people who like a lot of pictures with their words, but there's a fair amount of substance. I'm curious to see what others think of it.
posted by kittens for breakfast at 2:18 AM on October 20, 2016

I read the digital version, which I don't really recommend; so much jumping back and forth to footnotes and zooming in on images. I'm looking forward to delving into the hardback when I can pick it up next week.

It's satisfying in a lot of ways; it answers questions about the show I've always had and it ties together characters from the film with the series in interesting ways. In fact, I'm really glad the book (and the upcoming series) delves further into the mysteries set up by the film, as well as those things left unexplained by season two.
posted by crossoverman at 6:59 PM on October 20, 2016

I finished it. It's entertaining after a frankly dry opening that takes us back to 1805 (!) and says almost nothing that relevant to the show for what feels like forever. There's then a lot of UFO/Men in Black stuff that does tie into the show, but...probably not anybody's favorite parts of the show, and is a bit cliche besides. However, the MiB stuff gets better as the book ties it more and more to real life events and people (including one that shows Mark Frost isn't afraid of the enmity of an organization I dare not name). However however, how much of that is really important to the show, past or future, I don't know. I'm guessing very little.

About halfway through, the book starts actually addressing the Laura Palmer case, etc., and things pick up considerably for a spell. There isn't much here we don't already know, but it's all reframed in an engaging way. A few characters' fates that have been nebulous for twenty-five years (!) are revealed, some more completely than others.

If you're looking for the book to tell you what happened to Cooper, you're gonna be disappointed; but obviously, no one really expects the book to do that. The book exists in a weird place where it can't spoil anything too big about the upcoming series, but it still needs some raison d'etre beyond paying the bills. I'm not sure it succeeds on the second score. Still, for what it is, it's pretty good.
posted by kittens for breakfast at 11:35 AM on October 23, 2016 [1 favorite]

If you read Mark Frost's shooting script for the season 2 finale, you can see that it's much wordier and much more concerned with American iconography than the psycho-sexual stream of consciousness that the episode actually turned out to be. This novel is the same way. Lewis, Clark, UFOs and dead Milfords crowd out the exploration of good and evil that the entire franchise is ultimately concerned with.

To put it another way to Twin Peaks completists, just because young Dale Cooper was a fan of Efrem Zimbalist, Jr. in The FBI doesn't mean we need a photostatic reproduction of a signed publicity photo of Zimbalist with a Thompson.
posted by infinitewindow at 10:18 PM on February 12, 2017

I had been on the waiting list with my library for this since early November, finally got it this week, and tore through it in about a day. I had successfully avoided all spoilers for it (and also even anything more than about a one sentence summary of what it was) so I had zero expectations going into it, except that it was going to be about Twin Peaks.

I thought the book was a ton of fun, and I even really liked the "dry" Lewis & Clark beginning bits. I liked the whole thing. I really really really like world building in general and this book did that. And I'm also a sucker for anything mysterious and puzzley.

(It probably helped that I'm a casual Twin Peaks fan so minor inconsistencies didn't really stand out to me or bug me too much.) 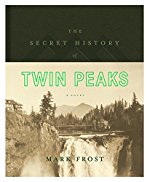