I’m starting to get the feeling that Taboo is just having us on. So determined were the attempts to shock its audience in episode three that it was hard not to imagine Tom Hardy and Steven Knight first concocting a series of vaguely transgressive scenarios - I suppose we should call them “taboos” - and then working a plot in around them.

Telegraph recap/review of episode 3
posted by filthy light thief (3 comments total)
Really? There's "over the top" and there's unnecessary. Thorne Geary was first creepy in Delaney's office, then abusive and terrible at his own home to Zilpha. And the reveal that Godfrey is a cross-dresser in a ... salon? I'm worried about where they'll go with that, it feels like it will be poorly handled "to be authentic with the time period."
posted by filthy light thief at 6:56 PM on January 23, 2017

I do love me some Tom Hardy, but I'm beginning to feel that Taboo needs to get moving. Feels like we're going over similar ground in each episode.

Still, it looks fantastic, and while I'm watching it I'm engrossed, so it must be doing something right.
posted by Fence at 12:16 PM on January 25, 2017

It's a Molly House, to be specific.

Just caught up with this. I agree with Fence that the plot needs a bit more forward propulsion, but I'm intrigued by the concept, which is a contemporary take on imperial Gothic. It's not really historical at all, but a stylized evocation of a historical moment, loaded with grotesques. (I mean, the Prince Regent...!) Knowing the real history of the East India Company probably doesn't help the viewer any, as it's more of a monster here than an actual organization.
posted by thomas j wise at 7:14 PM on January 25, 2017 [1 favorite] 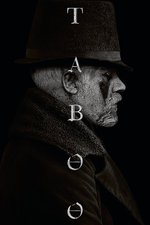