STORY NOTES
Did Ebert Like It? "This is among other things an absolutely lovely film, with production design, art direction and cinematography that create a distinctive place for the imagination. Not a real place--hardly a shot looks realistic, and some look cheerfully contrived--but a place in the mind. "

Burton talks openly about the movie's Hammer Horror roots and the casting of Christopher Lee in a small part underlines it. Some of the scenes are downright monochrome. I wonder how much influence there was from producer Francis Ford Coppola, who also released a love letter to early horror with Dracula a few years before. It's double anachronistic, a movie made in the late 90s that feels like a movie form the early 60s about people in New York state in 1799 who look and act like people in England in 1699 - but this feeling of being out of time helps the movie's more trope-y aspects. Even the "young Masbeth" stuff works cause it's so tied to the genre.

THE COSTUMES - Colleen Atwood knocked it out of the park here. Yes they're all way too fanciful and expensive for a 1799 New York farming village but they're amazing. All the men look like regency fops, all the women like witches in enchanted gowns. Top work. So glad we avoided another trip to Victoriana.

THE BEST: Miranda Richardson's final speech, which nearly falls into parody, saved by some epic scene chewing and outfits.

THE WORST: The rarely used but very obvious (and distracting) CGI.
posted by The Whelk (15 comments total) 3 users marked this as a favorite
This is so confusing because tonight was the Season 2 premiere of the TV show by the same name.
posted by Jacqueline at 9:33 PM on September 22, 2014 [4 favorites]

And a very memorable performance by Christopher Walken.

One of my favorite Tim Burton films - this one works for me due to the overarching theme of confronting (and conquering) fear. Loved Johnny Depp as the science-driven Ichabod. Christina Ricci is pretty good - the whole cast is memorable in fact.

And the best use of whatever that paper bird / cage toy is in a movie ever.

This is so confusing because tonight was the Season 2 premiere of the TV show by the same name.

This was one of my favorites as a kid, and I would imagine still holds up for me. Also, possibly, the last time I found Johnny Depp's schtick tolerable!
posted by codacorolla at 6:42 AM on September 23, 2014 [1 favorite]

This was and remains one of my favourite, maybe even my actual #1 favourite, Burton/Depp collaboration. Everything about it is so ridiculously overblown and delightful and gothically twee, a thing I did not even really knew existed until the first viewing.
posted by poffin boffin at 8:32 AM on September 23, 2014 [1 favorite]

Gothicy twee, there is this Edward Gorey touch to the whole thing - like it's juuuust enough on the parodic line to keep from topping over while still being a straight ahead horror movie.

Very fun movie, particularly the way it reminds everyone that Agent Mulder is basically a repurposed version of all those 19th century ghost-breakers and demonologists, from Van Helsing and Baron Vordenburg on down. Though I do like Roger Ebert pointing out that both the fun and the frothiness (or is that the foggery?) of the film can be summed up by noting that Ichabod Crane's opening narration refers to the 1799-1800 transition as "the turn of the millennium" rather than the century.
posted by kewb at 3:39 PM on September 23, 2014

Ricci's whole subplot does feel like there are pages missing tho. They set up Brom and everything and then...?
posted by The Whelk at 4:15 PM on September 23, 2014

The gateway in the Tree -- a bloody opening that Ichabod has to force his way into -- LEAST SUBTLE SEX METAPHOR EVER.

I think I agree that this is the last solidly good Tim Burton film. Before this: Pee-Wee, Beetlejuice, Batman, Edward Scissorhands, um yeah okay Batman Returns, Ed Wood, Mars Attacks. What a run. After this: Planet of the Apes, Big Fish, Charlie and The Chocolate Factory etc.
posted by We had a deal, Kyle at 4:56 PM on September 23, 2014 [1 favorite]

Gothicy twee, there is this Edward Gorey touch to the whole thing

If you dig American-style boardgames, A touch of Evil is basically Tim Burton's Sleepy Hollow: the Boardgame. It plays like a stripped-down, simplified Arkham Horror.
posted by Pope Guilty at 5:01 PM on September 23, 2014

I first saw this movie in theaters when it was new. Well. "Saw." I was in high school and went with my girlfriend at the time. Finding ourselves in an otherwise completely empty theater… Teenagery ensued. I would probably have pleasant memories of the movie because of that even if I didn't like it at all on later viewings.

I saw it properly on DVD a few years later and… Like a lot of the rest of you, I was quite taken by it visually, and liked a lot of the performances. Yet, I find it strangely hollow (if you'll pardon the word choice). I can't point to any particular place where it just completely doesn't work, but I don't find myself ending it feeling excited to revisit it again any time soon.

Not that I need that kind of deep satisfaction, "ooo, let's do that again," from every movie, but I think it's part of why I haven't revisited this one more than once or twice since that first proper viewing. It works better for me than a lot of Tim Burton movies, I will more than give it that.

I did find myself noting more strongly than in previous viewings the color grading in this movie. Some cursory googling didn't turn up much interesting on why Burton chose to have it look this particular way when it came to that though.

I was also noticing this time through Sleepy Hollow how many great little bits there are for the various character actors in this. Were this and From Hell Depp's last two big roles before Pirates of the Caribbean? I think they were. From Hell might make a strange pairing with this one, given Depp plays an Old Timey Detective in both. I haven't seen that one but once when it was new.
posted by sparkletone at 7:45 PM on September 23, 2014 [1 favorite]

I think you have to talk about tone and mood with this movie cause it doesn't really have anything else. Events just kind of happen, Ichabod has a brief moment of unifying his scientific world view to this new supernatural crime but it's dropped, he doesn't really seem to overcome his cowardice except at the very end and then the mystery is only resolved cause Everybody In Town Is About To Die and so many plot threads are just kind of hinted at and then dropped.

The only thing it has is it's mood and tone and visuals, and they're charming and distinct enough to carry the movie, but there's very little there there. I think it foreshadows the COMPLETELY empty, robotic mvoies Burton would later make (mostly with Depp) but there still enough effort and juice left a charmingly retro little one off.
posted by The Whelk at 9:07 PM on September 23, 2014 [1 favorite] 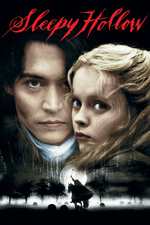