The fourth volume in Stephen King's bestselling Dark Tower series. Roland, The Last Gunslinger, and his band of followers have narrowly escaped one world, and slipped into the next. It is here that Roland tells them a long-ago tale of love and adventure.


The ka-tet faces down the challenge of Blaine in a riddle contest, and gets off the train in Topeka, Kansas. Well, not our Topeka, but one from a world nearby which has been depopulated by the plague of The Stand.

By the turnpike, Roland tells the story of his journey as a young gunslinger to the Barony of Mejis, where he and his friends Alain and Cuthbert uncover a plot to fuel a rebellion and end it. Along the way, Roland falls in love and finds the pink coloured Wizard's Glass, which provides Roland with visions about the future and the past.
posted by nubs (8 comments total) 1 user marked this as a favorite
I kept the description somewhat vague, as I don't think we've ever settled the question of if this is a first read or a re-read discussion. There may be new readers coming based on the conversation about the release of the trailer.

That being said, if you're in the thread, discussion of all points of the book are free-form; I'm just not sure if we 're ok with having discussion regarding later developments in the saga.
posted by nubs at 3:49 PM on May 3, 2017

Oh; I read this and then the next post never came; and now I should re-read again so that it's fresh because I don't really remember the ending very well.

But anyway: I found the story-within-a-story nesting frustrating. It felt like King really really wanted to write the Mejis story and in doing so left our current-day characters -- the ones we've spent three books identifying with -- twiddling their thumbs by a turnpike for 600 pages. It's not that it's a bad story; it's just such a derailment of the momentum that the Blaine journey built up.

For my best friend's birthday in 1996, I found the first two chapters that had been released online and made him a chapbook using the same fonts that Donald M. Grant used for their hardcovers of books 1-3. I was a little bit miffed when the final novel was released because Dave McKean had used a different font (Matrix) for Blaine's dialog.

This is the novel I would like to see as a pay cable/streaming series. Octavius J. Johnson as Young Roland Deschain, Zendaya as Susan Delgado, Brad Pitt as Eldred Jonas.
posted by infinitewindow at 10:25 PM on May 3, 2017 [1 favorite]

I have odd feelings about this book; when it first came out I devoured it as it had been 6 years since Waste Lands. I loved every moment with it, even though it did feel odd to step away from Jake and Oy and Eddie and Susannah for so long; I had expected Roland to tell his story over successive nights as they kept walking in the world of Captain Trips - that the story would intersperse between Roland's present day crew and past history and weave the two together.

Anyways, I did love it - I was enthralled with everything. On re-read some years back however, I found it rather flat and kind of dull? Anyways, I'm going to crack it again for this thread and see what I think now.

It is perhaps the most straightforward novel of the first four; we have our knights on a quest and the stakes are relatively clear; the ties to the Tower don't come until later. So it would make for a pretty decent movie and could have served as the starting point for the movie adaptations - young Roland coming into manhood and discovering his greater purpose. But...

Young Roland's kind of a dick, isn't he?

Roland is always kind of a dick; for me, he only really starts to become recognizably human again in the Waste Lands, when his bond with Jake drives him near insanity and the task of rescuing Jake really forges the ka-tet. But, yeah, Young Roland's dickishness might be too off-putting for making this the foundation story for new comers - though the Gunslinger is pretty off-putting too, I guess.

When I first read this as a young teenager, I almost skimmed the whole Meijis story, I was so bored and annoyed we weren't back with the main cast. When I reread a few months ago, I was really surprised by how much I enjoyed it for what it was. This and Wind Through the Keyhole are a weird interlude between 1-3 and 5-7, and there are things about the story i wasn't nuts about, but when the next book's right there I found a lot to appreciate.
posted by jameaterblues at 4:41 PM on May 4, 2017

Very much looking forward to discussion of The Wind Through the Keyhole, the first DT novel in fifteen years that wasn't rushed due to FOMO.
posted by infinitewindow at 4:45 PM on May 4, 2017

Just finished a re-read last night, can't believe it's been 20 years since this came out. I read it right when it was published but had close to zero memory of it, which is weird since I liked this much, much more than books 5, 6 or 7 but remember those more. One thing I do remember from my first time through is rolling my eyes so hard over the tie-in to the Stand.

Anyway, the framing device was pretty rough. There was about a 2-page interlude from the Mejis storyline right in the middle that was just ridiculous. The Kansas-storyline characters were basically just like "Wow, this story sure has gone on pretty long, everyone good? Okay, let's get back to the action."

Eldred was a more interesting villain than either Walter or the Crimson King (the latter by a mile), he should have had a better death. His romance with Coral Thorin was oddly compelling, an interesting parallel to Roland and Susan.
posted by skewed at 11:19 PM on July 13, 2017

I'm reminded: we find out in this book, how Cuthbert's name is pronounced, answering this question from the first post. As Sheemie says it: "Key-youth-bert."

Apropos of that: the Stephen King shelf called to me last time I was at the library and I checked out both The Wind Through The Keyhole and Wolves of the Calla. I'll put posts up for them shortly.

Story-wise, Keyhole sits between Wizard and Wolves so it probably makes sense to do it next.
posted by We had a deal, Kyle at 12:44 PM on March 26, 2018 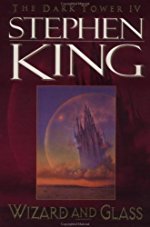