Archie and Veronica continue to grow closer; Betty confronts her mother; Jughead finds himself in an unexpected situation; Hermione makes Fred an offer that seems too good to be true; Cheryl takes matters into her own hands.
posted by litera scripta manet (8 comments total)
So that was a pretty eventful episode. I wasn't really paying attention to the time, so when they had the scene of the kids in the diner, I thought, wow, no massive cliffhanger for the season finale?

But then they shot Fred! They wouldn't actually kill him off, would they? But I guess this is going to be part of next season's mystery. Although it has to be Hiram Lodge, right? And what do we think Fred wanted to talk to Archie about, anyway?

Also, did anyone feel like Cheryl was channeling Bertha Mason from Jane Eyre in those final scenes with the whole burning Thornhill to the ground? I really loved Cheryl's whole creepy aesthetic in this episode.

I also have to say that Archie has become more tolerable each episode over the last three episodes or so. I mean, the punching the ice to save Cheryl wins him some points, at the very least.

You know who has become a lot more obnoxious? Hermione Lodge. I guess Hermione and Hiram will be the new antagonists next season.

Also, I really hated the way FP basically sacrifices Jughead in order to not betray the Serpents.. Jughead deserves far better parental figures. I guess the most gracious reading of FP's motives would be that he didn't think Jughead would be safe if he pissed off all the Serpents, whereas now Jughead has the Serpents watching his back.

One last thing: Doesn't it seem like Polly should have had those babies already? We know Jason ran away on July 4, and Polly was far enough along at that point that they knew she was pregnant and I believe Hal had already tried to get her to have an abortion, so she must have been what, at least 6-8 weeks along at that point? And now we're at the end of the school year, right? Or maybe not?
posted by litera scripta manet at 8:47 PM on May 11, 2017 [3 favorites]

Oh, and I'm super disappointed that we got one of Archie's boring songs instead of a legit performance by the Pussycats. They've been severely underutilized, especially in the second half of this season.
posted by litera scripta manet at 8:50 PM on May 11, 2017 [7 favorites]

I know there's been some controversy about Jughead's asexuality not being reflected in Riverdale but I don't mind it so much? This might have been his, what, first significant relationship? He's got time to work that out, he doesn't need to know immediately.

and oh man Cheryl, talk about character development. Though I could see the suicidality from a mile away.
posted by divabat at 4:48 AM on May 12, 2017 [1 favorite]

At what point do we learn that Hiram Lodge is nothing but Hermione's pawn?

Anyway I might be weird in that I read the Fanfare and online recaps of the show prior to watching each episode so will be back with my impressions later, but it really seems like they are trying to make Hermione the bad one.
posted by Literaryhero at 7:38 AM on May 12, 2017 [1 favorite]

So, this was the "family we're born into vs family we choose/ old bonds vs new" episode: FP staying true to the Serpents vs making a deal to get out earlier for his son, Betty Cooper having to choose Jughead or her family and their lies, Jughead being put into foster care and moving to the "south side" and separating from his Riverdale High crew, Hermione trying to stay by Hiram and separate from Fred, Josie facing off against her mother vs siding with Archie, and I'm sure there's more.

The opening groaner was bold: "It was the ultimate cliffhanger ..." Jughead, you're better than that! That's a dad joke, and you're so young! You're all so young!

Odd detail: Betty's hair had long, dark roots earlier in the episode, then for the jubilee she had solid blond hair. Maybe playing the part of dutiful daughter (with the appropriate lipstick), only to speak her mind?


it really seems like they are trying to make Hermione the bad one.

Just wait until we can actually meet Hiram. I assume he's on par with Clifford Blossom for narcissistic patriarchs.
posted by filthy light thief at 8:11 AM on May 12, 2017

I read on Wikipedia somewhere that in the books, Cheryl Blossom gets together with Dilton Doily.

And now, for reasons I don't fully understand, I find myself shipping that so hard. I want Dilton and post-Arson Cheryl to find a little slice of hope and peace together, tying knots, watching birds, and kitting out a storm cellar with space blankets, lifestraws, and MREs.
posted by palmcorder_yajna at 5:18 PM on May 22, 2017 [5 favorites]

Cheryl's house. That bed.
"Ohmygod, Cheryl's become the cover art to an Evanescence Album!"
"I think she's been one for most of the season."

And no cell phones? Though I guess it would detract from the drama to have someone wandering around muttering "Can you hear me now?"

And damnit Archie gang, you have a near drowning, take her to the hospital, not psycho mom's house. Though this being Riverdale, the hospital's response would probably be to lock them in a basement rather than admit the local river has dangerous ice or something.

Honestly, a "Fall of the House of Usher" scenario is the only proper way for the Cheryl saga to end.

Remember kids, don't have premarital sex, because your dad will get shot!

At this point, I think if Sabrina shows up, it will be in some Lovecraftian scenario. You know, maybe there's a reason we haven't met Hiram Lodge. Maybe you have to go into the woods on moonless nights wearing a robe and cowl to meet him. Maybe he can't leave the woods. Say, where does that maple syrup really come from?
posted by happyroach at 9:45 AM on May 24, 2017 [1 favorite]

I am just very disappointed we never found out what was happening with those creepy Chekhov's Milkshakes at Thornhill.
posted by corb at 7:20 PM on June 8, 2017 [4 favorites] 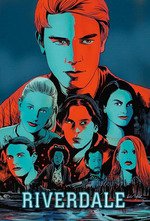