Based on the 1997 roman à clef of the same name, this funny, sexy, beautiful adaptation stars Kevin Bacon, Kathryn Hahn, and Griffin Dunne as the story's tragicomic love triangle broken over an epistolary artwork, all the while struggling to make sense of their desires, shame, and creative impulses. Well, maybe Dick isn't struggling. He's just Dick. Amazon's description: Adapted from the lauded feminist novel, I LOVE DICK is set in a colorful academic community in Marfa, Texas. It tells the story of a struggling married couple, Chris and Sylvere, and their obsession with a charismatic professor named Dick. Told in Rashomon-style shifts of POV, I LOVE DICK charts the unraveling of a marriage, the awakening of an artist and the deification of a reluctant messiah.


So, what I'd really like to know is—Did Dick Hebdige, the estate of Donald Judd, and Sylvère Lotringer actually sign off on this?

The thing I think I like the most about this is its spot-on use of the '90s postmodern aesthetic and its ability to be film but look like photography, particularly from that era.
posted by Stanczyk (7 comments total)
I made it a little way into the first episode but found the two of them absolutely insufferable. Is their insufferability the main event, or is there a lot more going on than I picked up in the piece I watched?
posted by Dip Flash at 5:20 AM on May 13, 2017

So, what I'd really like to know is—Did Dick Hebdige, the estate of Donald Judd, and Sylvère Lotringer actually sign off on this?

I am not sure where I got this impression, but my understanding was that Dick Hebdige was really irritated (and slightly mortified) by the book, so I'm going to guess not. But I don't know.
posted by ArbitraryAndCapricious at 12:54 PM on May 13, 2017

Maureen Ryan over at Variety (a fantastic TV critic, one of my faves) has a nuanced review that is generally very positive, and got me to watch the first episode, which I liked a lot.
posted by mediareport at 7:11 PM on May 15, 2017 [1 favorite]

Just got to episode 5 and it is really good. However, episode 4 is when it makes the turn. It reminds me a lot of the start to Transparent which seemed full of the most loathsome and unsympathetic people ever created. Then somewhere several episodes in it makes a turn and becomes pretty fascinating. I really loved Soloway talking about this in several interviews and was excited for it but the first few episodes felt so tortuous in that the relationships are so strained and awkward. It's when the secondary characters get going that it starts to get interesting.

And I didn't understand why Soloway included a Manic Pixie Dreamgirl character in her narrative centered on what she calls the "female gaze" (which is really, really interesting). But then I realized that the character was actually a Manic Pixie Dreamjerk. So that makes sense.

Loved this, loved this, loved this. Agree with above, the first episode is difficult, because the personalities are not pleasant. And the Chris Kraus character is so awkward & cringey! However, when the other characters get involved, it becomes much more interesting. And I love how Kevin Bacon is the sexual object. So many male-female reversals in this, and I love to experience it as the gazer.
posted by honey badger at 1:06 PM on July 24, 2017 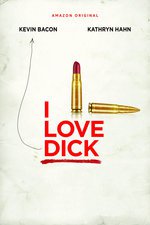