In pursuit of answers, Vanessa and Sir Malcolm attend a party at Egyptologist Sir Ferdinand Lyle's home. Meanwhile, Ethan befriends Ms. Brona Croft, a young Irish immigrant.
posted by Pendragon (31 comments total) 1 user marked this as a favorite
That ending took me completely by surprise. Poor Proteus.
posted by Pendragon at 6:03 AM on May 19, 2014 [5 favorites]

Me too, Pendragon. For me this show keeps falling into a figurative uncanny valley. It's almost exactly like a great television show. Unimpeachable production values, superb performances from compelling actors, visual panache, check, check, check. And yet, it's NOT a great television show, is it? Something isn't there, something I expect and do not find, and whatever lacking element ought to exist, whatever oddity or distortion or limit it's up against, it leaves me uneasy. Restless. Perturbed. Dammit, show, do better, be a real boy!
posted by cgc373 at 6:25 AM on May 19, 2014 [5 favorites]

Me three. Annoying, because the scenes with Proteus and Victor were so odd and sweet, as if they were part of a different, much better programme. Still, fun cliffhanger.

Yep. The curse of Sky, as Grangousier said in the last thread.

It's as if they cane most of the budget on booking big-ish name actors, chuck the rest into production and then, minutes before they start of filming, remember that dramas also need to be written. (Not a problem exclusive to Sky, of course - you can see the same kind of 'oop, what about the script?' offness in that Netflix-produced atrocity with Famke Janssen last year, or the so-bad-it's-good-actually-really-bad Under the Dome. See also: most of The Walking Dead.)

Talking of badness, can anyone explain how Billie Piper gets work as an actor? This is more of a mystery to me than any soul-fed Egyptian immortal.

That séance scene was quite something. All the bloodycunt horrorchild stuff seemed aimed very squarely at Sir Malcolm?

I really liked the first two episodes. This show wasn't even on my radar a month ago, so I didn't have any expectations.
posted by Pendragon at 7:13 AM on May 19, 2014

It's like the secretly looooove the cheese but they are too afraid to admit it. Come on, you called it Penny Dreadful, embrace the part! More Eva Green going bonkers, Dorian Grey propositioning even the cupboards and chinaware successfully, and Jealous Creature fucking up with Victor's quality control standards. I'm still hopeful, and if not, it remains fun anyways.
posted by Iosephus at 8:38 AM on May 19, 2014

Re: the seance scene itself, did the possessing spirit accuse Murray of incest with Mina?

(I had trouble following what all of the revelations were supposed to be. besides that Eva Green continues to be awesome )
posted by warm_planet at 9:24 AM on May 19, 2014

I'm enjoying it, and not really getting the "uncanny valley" effect other people apparently are - to me it just seems a difference in pacing, like this show is meandering along at a sedate pace, more interested in the journey than the destination. Which is fine with me. (Plus I could watch "Eva Green Reads the Phonebook".)

And ugh, Billie Piper's accent was not doing it for me at all. But Dorian Grey managed to be blatantly sleazy and creepy and yet also perfectly charming in just the right way.

Re: the seance scene itself, did the possessing spirit accuse Murray of incest with Mina?

I re-watched the episode and the gist of it seems to be:
1. Vanessa gets possessed by some ancient spirit, which Madam Kali labels "Amunet"
2. Amunet then channels fragments of Peter, Malcolm's son who died of dysentery in Africa and may or may not have a mountain named after him.
3. Spirit possessing Vanessa (possibly the same one as before, or now a different one?) claims to be something older and worse than Amunet.
4. Spirit channels fragments of...Mina? So, incest. Vanessa walked in on said incest. Lots of bad language. Mina's being held by some male with red eyes. This whole segment seems to be, even moreso than segment 2, aimed squarely at pissing off Malcolm/preying on his weak spots, so I'm not sure how reliable a version of the "facts" we're getting here.

Later on the Egyptologist (who is delightful, I hope that character sticks around, even if he isn't going to invite Vanessa to any more parties) seems to be pretty convinced it was Amunet possessing Vanessa the whole time but I'm not sure the actual seance supports that.

Also, on a rewatch, knowing the twist that was coming at the end, I liked how Victor really seemed to have a good handle on how to deal with Proteus and what to expect from Proteus, without blatantly telegraphing "Oh yeah, I've done this before". Now I'm left wondering if it's just the one previous 'success' or how many more there have been.
posted by mstokes650 at 10:15 AM on May 19, 2014 [2 favorites]

Thanks mstokes650... it seemed like Vanessa's walking-in-on-said-incest was an important plot point that had been hinted at previously,
and I was thinking other things might have been lost in the shuffle.

without blatantly telegraphing "Oh yeah, I've done this before".

Yeah, ok, that was part of the WTF of that twist, bc if Frankenstein's done this before, it seems to diminish the initial wonderousness of the first scene meeting Proteus.
posted by warm_planet at 10:30 AM on May 19, 2014

Specifically, the pilot features two big hallmarks of bad-writing-impersonating-good: 1. the main characters are all elliptical and constipated and mad at each other from the beginning for no clear reason, and 2. "You're new to this but I'm not going to tell you anything about it and even though what I'm introducing you to is so fantastical no one would be prepared for it, I'm nevertheless going to treat you like a contemptible idiot for being surprised by things that I could have warned you about a long time ago yet didn't."

I realize that the show is riffing on the sort of badly written Victorian pulp that featured both of the above, but I don't think my issues with the writing can entirely be explained away as a loving homage I'm just misunderstanding. It feels more like the writers know that character conflict is a good thing, but don't try to generate real conflicts so much as just make them act pissy to each other.

I'm really enjoying this show, had zero expectations coming into the first episode, and was very pleasantly surprised by everything so far.

. "You're new to this but I'm not going to tell you anything about it and even though what I'm introducing you to is so fantastical no one would be prepared for it, I'm nevertheless going to treat you like a contemptible idiot for being surprised by things that I could have warned you about a long time ago yet didn't."

Yes, that is super distracting to me. Josh Hartnetts relationship to the rest of the story is the weak part for me. He doesn't even seem to know where he is or what he's doing.
posted by fshgrl at 1:00 PM on May 19, 2014

That ending took me completely by surprise. Poor Proteus.

It was fun but I didn't enjoy this one as much as the pilot. The weakest part for me was Dorian Gray, who I found utterly boring. I enjoyed Proteus's development until the twist at the ending, but maybe he can be fixed and brought back. Frankenstein looks pretty young, so if he's been doing this work for a long time then he might be lot older than he appears and has probably been experimenting on himself as well. That might address Grangousier's point from the last thread about how Frankenstein fits in this period.
posted by homunculus at 1:20 PM on May 19, 2014

I worked on the VFX in that scene

Yeah, I was becoming rather fond of the little dude. In fact, I liked him so much I googled the actor as I watched the episode.

'Huh,' I thought, 'It's weird that IMDB and Wikipedia both seem to think Frankenstein's monster is being played by Rory Kinnear, because that is not Rory Kinnear. Hmm. Could it be Rory Kinnear? His head is the right general shape. Maybe Rory Kinnear had a facelift? And hair transplant? And lost weight? No, that's ridiculous. Aw, look at him! Having memories and conversations! So adorable. Aw, ten friends! He's just the sweetest... Oh. Oh. Oh. Oh I see. Yes, ok. THAT'S Rory Kinnear.'
posted by EXISTENZ IS PAUSED at 5:55 PM on May 19, 2014 [13 favorites]

I did the exact same Rory Kinnear double-take.
Kinnear's such a good actor I was leaning toward "it must be him, wow he's lost weight for the role" before I realised IMDB listed Proteus as a separate character.

Also, it's always a joy to watch Simon Russell Beale waltzing right up to the line of affectation but never actually crossing it.
If they ever make a Dali biopic there's simply no other choice.
posted by fullerine at 9:09 PM on May 19, 2014 [3 favorites]

Ten friends, he just wanted ten friends! T'bf had already watched the episode so he made sympathetic noises as I yelped.

Just rewatched the ending. I liked how the Proteus-eats-a-chestnut moment seemed to refer to the Bub-the-Zombie-listens-to-music moment in Day of the Dead.
posted by EXISTENZ IS PAUSED at 7:18 PM on May 20, 2014

(Though obviously not as direct a reference as the one in last season's American Horror Story).
posted by EXISTENZ IS PAUSED at 7:19 PM on May 20, 2014

Ten friends, he just wanted ten friends! T'bf had already watched the episode so he made sympathetic noises as I yelped.

I feel like it's playing, "This is all mysteeeerious and creeeeepy" a little too much - I'd like moar exposition plz, or building up of a little more specifics between people. It's feeling a little stretched between people.

I greatly loved Vanessa being possessed - I still think she's actually a vampire; they could be playing around with side effects of not having a soul... maybe? Vampires change so much between stories.

I also liked Dorian Gray. He reminded me of sugarplums laced with arsenic.
posted by Deoridhe at 7:05 PM on May 25, 2014 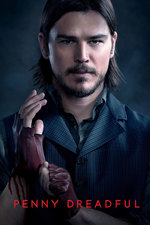