A season long thread to discuss differences between the show and the comic.


I was on the fence about the need for this until "Pig," but with the introduction of Herr Starr, I feel like at least a couple of people might be interested in talking about some of the changes made.

It's been probably 20+ years since I read the comic, so I'm probably not the person to lead this discussion. That said, here's a few things to get the ball rolling:

* the Saint of Killers neither froze over Hell, nor killed the Devil. Also, his guns are crazy lethal, but no longer forged from the sword of the Angel of Death, (leaving no canon explanation for why he can kill angels on the show).

* Herr Starr's employment montage is very different on the show. It was hilarious, but missed a couple of moments I really enjoyed from the comic: the bit where he blows up an entire building to kill one person with plausible deniability, and his speech about the need to shoot female opposition first because, due to misogyny, they will be better in every way than their male counterparts and thus a greater threat.

* Jesse's family wasn't involved in soul trading in the comic.

I'm sure most of you remember the original story better than I do, so I'm curious what observations anybody has about these differences.
posted by mordax (14 comments total)
Was Denis in the comic? It's been years and I don't remember.
posted by DirtyOldTown at 9:57 AM on August 1, 2017

I don't recall Cassidy having a son in the comics. A quick perusal of wikipedia doesn't suggest any such thing either. (Denis' age also suggests that Cassidy's either younger than his comics counterpart - having a son before being vamped - or that vampires can have children.)
posted by mordax at 11:02 AM on August 1, 2017

I feel pretty confident that the comics didn't have Trump winning the elections.
posted by Pendragon at 1:23 PM on August 1, 2017

Herr Starr remind anyone else of Mike Pence?

I love how some of the scenes look like comic book panels. The one where he tosses the guy over the balcony was similar to when Quincannon's family falls down in the ski lift.
posted by mokeydraws at 1:25 PM on August 1, 2017 [1 favorite]

The show may differ form the comic in certain plot points, but I think it captures the spirit of the comic pretty accurately, for now.
posted by Pendragon at 1:30 PM on August 1, 2017 [1 favorite]

I feel pretty confident that the comics didn't have Trump winning the elections.

No, but Garth Ennis did accurately describe the internal workings of the Trump administration in Crossed, so it still feels close enough.

(Warning: do *not* Google Crossed. If you don't know what I'm talking about, enjoy your blissful ignorance.)

The show may differ form the comic in certain plot points, but I think it captures the spirit of the comic pretty accurately, for now.

That's something that fascinated me about both the Saint and Starr: they seem about the same in terms of temperament despite the altered backstories.
posted by mordax at 5:46 PM on August 1, 2017

(Warning: do *not* Google Crossed. If you don't know what I'm talking about, enjoy your blissful ignorance.)

I reread the comics recently, and I have to say I'm getting a lot more enjoyment out of the show than I did reading the books. Most importantly, Tulip seems to be an actual character instead of just an obstacle Jesse has to deal with / thing he has to possess. My biggest regret is possibly that they didn't manage to get a whole set of actors with the exact same facial features to play everybody, for the Steve Dillon effect. (Mostly kidding! I love Steven Dillon. Those faces, though, c'mon.)
posted by whir at 7:38 PM on August 2, 2017 [1 favorite]

Those faces, though, c'mon.

Yeah - it's like Frank Quitely... great artist, but everyone's face looks like they're suffering from either consumption, or an allergic reaction to a thousand beestings.
posted by FatherDagon at 8:13 PM on August 3, 2017

We gamed out the casting for Preacher a few years ago (there was much bourbon involved) and I swore that Rene Russo would be perfect to play Tulip.

But Ruth Negga owns the character. The whole cast is, frankly, terrific.
posted by Thistledown at 12:54 PM on August 4, 2017 [1 favorite]

I was a fan of the comic, but always found the handling of Cassidy and Tulip in print to be a little slippery. I think Ruth Negga's Tulip and Joe Gilgun's Cassidy are both marked improvements with much more distinct and layered personalities.

I'm getting mine via less than legitimate sources, I fear. Not sure about anything else.
posted by mordax at 11:14 AM on September 3, 2017

So far this is better than the comics, which have not aged well, and/or aren't as good as you age. I love the new Tulip, re-reading the comic synopsis there's so much of her just being ditched or damsel-ed and it seems like a really possessive and unhealthy relationship. I am also hoping they rework Cassidy getting her all hooked on drugs and shit.

The changes to Arseface are fantastic so far, plus so far havent had to see as much of his asshole dad.
posted by GoblinHoney at 9:15 AM on September 24, 2019 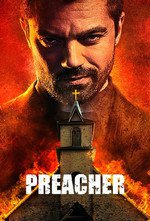