An innocent yet pampered young virgin and her family's pregnant and jealous servant set out to deliver candles to church, but only one returns from events that transpire in the woods along the way. [Content Warning]


Slant: Based off a medieval sonnet about the rape and murder of a farming family’s only child and her parents’ subsequent vengeance-cum-spiritual awakening, Virgin Spring presents a spare, pastoral setting in which a young girl’s metaphoric, doomed journey through the forest primeval represents the terror of filial dissolution from the parents’ point of view. Bergman and his screenwriter Ula Isaksson set this theme against Scandinavia during a period in which the region’s religious identity was writhing in its own parallel domestic divergence, caught between Norse paganism and blossoming Christianity. (As we all know now, there was no place in Europe where Christianity established a more tenacious foothold, excepting perhaps Italy.)

According to Bergman scholars, Virgin Spring itself represents the primary nexus between Bergman’s austere but accessibly recherché works of the 1950s and his downright ascetic 1960s cinema. In case you needed to know, Christianity wins hands down, across the spread. When Max Von Sydow’s patriarch, upon discovering that the trio of herdsmen seeking refuge from the wintry elements in his guest shack have defiled and killed his daughter on her way to deliver sacred candles to church, kills the three murderers and finds her corpse in the forest, he spends 30 seconds contemplating God’s cruel whims before declaring his intentions to build a stone cathedral on that very site. Quavering faith is scarcely in question, though—the titular spring gushes from the very spot where the dead girl’s head rested as if in divine approval of Sydow’s vow.

AV Club: Later dismissed by Bergman as "an aberration" (although it won him an Oscar), The Virgin Spring drew new audiences and pushed away old fans, like many of Bergman's Swedish champions and supporters in the French New Wave. It isn't hard to see why it divided viewers, since it seems divided against itself. Von Sydow questions his faith in God, but when he finds what looks like proof of God's existence, it doesn't clear up any of his questions. Maybe Bergman wrote the movie off because he was on the verge of giving up on God altogether, but today, its tangle of doubt, religion, loss, revenge, and regret seems as timely as ever.

Criterion Collection: As he proved with The Seventh Seal, Bergman shares with the Japanese masters Akira Kurosawa and Kenji Mizoguchi a flair for evoking the medieval world with neither fuss nor extravagance. When Karin prepares her face for her journey, her youthful vanity as well as historical custom are suggested by shots of her gazing into the mirror-still water of a cask. And when Töre sits down at table, he finds his cutlery in a pouch at his belt. Even the way a door is fastened seems authentic, while many compositions recall quattrocento religious paintings, with Märeta’s head inclined to one side like the Madonna’s.

Bergman’s films never did well in his native country, and he shot each new production on a rigorous budget. The crew for The Virgin Spring was modest by Hollywood standards: just twenty-two actors and technicians, waiting for a break in the weather to set up the elaborate, Kurosawa-like tracking shots through the tightly packed trees. And the filmmaking style, as on all his projects, was intimate and informal. Cast and crew were obliged to improvise from day to day. The leaves on the trees looked too abundant for a script that demanded buds about to burst, so new locations had to be scouted farther north. The birch tree uprooted by Töre, as he prepares for the slaughter of the herdsmen, had to be planted artificially in an open field, because no stretch of ground containing just a single sapling or tree could be found. There were difficulties with the sound recording, and with the evening light in certain sequences. On one day of shooting, Bergman would later recall, two majestic cranes soared overhead. The crew dropped their equipment and scrambled up a slope to get a better view. The birds disappeared over the western horizon, and Bergman and his colleagues returned to work, invigorated by the sight. “I felt a sudden happiness and relief,” he said. “I felt secure and at home.”

The Virgin Spring marked a crucial watershed in Bergman’s attitudes toward life and the cinema. Early in the ensuing decade, he would turn to psychological issues at the expense of ethical ones. He would renounce the historical environment of The Seventh Seal, The Magician, and The Virgin Spring, and he would film his work in a harder, less mannered idiom. So this ruthless parable represents for him both a farewell to the past and a harbinger of the future, just as the 1950s gave way to the 1960s in manifold ways.

Pop Matters: Bergman employs no camera tricks to heighten drama or suspense beyond his standard imbuing of the goings on with a kind of thematic, almost literary “weight,” that which holds significance to the violent act but only through several layers of meaning, certainly not as with more typical horror tropes, like “mirror gags” or atmospheric music. Only the fact of extreme violence positions Bergman’s nuanced, much more cerebral technique within horror’s purview. Whatever is shown in frame, however ordinary or banal, all is set on edge and filtered through a reality fraught with danger. Yet “that which is horrific” is not localized to a monster; all are monsters in Bergman’s imagined world, even victimized children. This is not to say that his world is not subject to the supernatural, but that the supernatural is more personally defined. One faces monsters within, and this often alone.

Bergman’s film also benefits from a kind of tension between form and content. As those visceral elements that would seem so at home in a horror film rub against those more cerebral, more “heavy” in theme, a competition arises that initially unsettles but ultimately resolves in an image at once violent and ecstatic. I refer here to the gushing forth of the titular “spring.” The film is circuitous in execution of theme, giving way to many backtracks and false starts, yet also straight-forward in plot and characterization. A film that would take a story easily adapted to the horror genre and treat it with such serious-mindedness—as in the long scene where Max von Sydow’s character uproots the tree to find twigs for his pre-vengeance ablutions, or that where the victimized girl has a most pleasant luncheon with her murderers—is in the business of upsetting expectations, of hitting on multiple levels at once. These elements at times seems at cross purposes but in the end give texture and nuance to the thrust of a quite simple story.

Senses of Cinema: While The Virgin Spring is regarded by many cineastes as a serious, thoughtful, intellectual film, made by a notable art-house auteur, Craven’s version of roughly the same story has been labelled by some people as a crude copy of a far superior work. While discussion of the merits of Craven’s film continue to be debated, The Virgin Spring seems to have been reduced to an interesting piece of film trivia; a ”world cinema” film that is perhaps chiefly known as providing the inspiration for a more widely known American version of the same story. Just as Akira Kurosawa’s The Hidden Fortress (1958) is often discussed as being an influence on George Lucas’ Star Wars (1977), and less often talked about as a film in its own right, so The Virgin Spring is often only mentioned in relation to The Last House on the Left.

Whether you admire or loathe The Last House on the Left, it does attempt to reflect the liberated youth culture and loss of innocence in the United States at the time, when the 1960s counter-culture’s dream of peace and love began to fade. In the 1970s, the feeling of optimism was dulled after events like the horrific late 1969 killings related to Charles Manson and the continuing cataclysm of the Vietnam War. The appalling violence meted out to the two girls in Craven’s film seems to mirror the horrors and turmoil of the time. In contrast, The Virgin Spring is set in medieval times and its concerns are primarily religious, rather than political or social. Bergman’s film stars Max von Sydow, who is often seen as the director’s archetypal male protagonist and surrogate, largely because of his iconic role in his earlier film, The Seventh Seal (1957). Although von Sydow’s presence dominates the film (particularly in its latter stages), it is arguably Ingeri (Gunnel Lindblom) who is the film’s main character and whose vindictive behaviour against her stepsister, Karin (Birgitta Petersson), sets in motion the subsequent acts of horror. 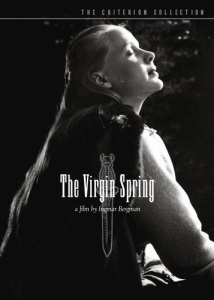