After withdrawing to the Chateau Marmont, a passionless Hollywood actor reexamines his life when his eleven-year-old daughter surprises him with a visit.


[Trailer] [IMDB] [Wikipedia] [Rotten Tomatoes] [TV Tropes] ...the waters of this film are not only still and deep but also bracingly clear, and the most remarkable thing about it may be how much it implies while saying so little. There is barely any quotable or memorable dialogue, and yet its images are so eloquent that they demand to be seen over and over again. The New York Times

Coppola’s touching portrait of a father and daughter is so charming, observant and specific, it defies a Hollywood ending. Film Journal International Somewhere has its funny moments, and its clever moments, but the blankness and passivity of the central character make it peculiarly remote, as if you were watching it from a million miles away. And it doesn’t stick. Like a dream, it is even fading as I’m trying to remember it. This isn’t a bad film, and is probably better and more courageous than most films, plus Elle Fanning is extremely winning, but it is just too distant and uninflected. The Spectator

Fame is a vampire: We've heard it before. We don't need to hear it again. The Austin Chronicle 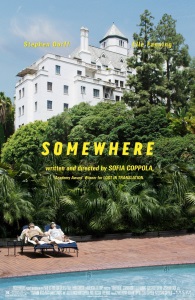