Sarah Silverman has a new weekly talkshow on Hulu. It's pretty interesting. So far, the first two episodes both included segments where Sarah hangs out with a Trump-supporting family in the South. Those are kind of fascinating, and against all odds, it appeared that common ground was found. Obviously not on everything, but enough to make you hopeful. The third episode—just aired—is a lot more scripted. Except the Tig Nataro segment where Tig tries to learn how to chant like an auctioneer. Comedy gold. The rest gets kind of Fernwood Tonight, and by that I mean brilliant.


It's hard to tell sometimes when Silverman is being funny and being sincere, but I completely buy into her stated goal of recognizing there's a communication problem and trying to bridge it. It may not work, but I like what I'm seeing so far. And I'm laughing out loud, which I seldom do with talkshows.

The animated opening alone is worth a watch.

Also a nice touch, the token white guy at a desk.
posted by Stanczyk (6 comments total) 4 users marked this as a favorite
Tig Notaro as aucitoneer, from beginning to end, had me laughing harder than I have laughed in years.
posted by obtuser at 12:18 PM on October 27, 2017

I was expecting Sarah and Tig to interact more and I was actually hoping that Tig might talk about sexual harassment, the recent season of her Amazon show, One Mississippi, and the accusations about Louis CK.
posted by Stanczyk at 1:35 PM on October 27, 2017 [2 favorites]

The trips were pretty shallow, but I liked the interviews. Both (ep.1&2) were really interesting. Showing a naked woman and insisting that one can see her vagina is pretty strange, though. But I've noticed that some detractors have picked up on this to criticize the show. There's a bit of difference between some pubic hair and a vagina, isn't there ? (I mean, to an American audience).
posted by nicolin at 2:14 AM on November 2, 2017

Sarah talks about Louis in episode 6 which aired tonight. It's worth hearing. She discusses the necessity to talk about the terrible things he did while expressing conflict about a friend whose actions she doesn't accept but still loving that friend. Like a lot of the other segments, it's genuine, necessary, and clearly difficult.

Holy cow her family is amazing. Susan and Schleppy especially.

This week's episode (also the season finale?) was SO GREAT. I usually go into them without looking at the guests so when Todd Glass showed up in a segment I mentally rolled around on the ground like a gleeful puppy and THEN ROXANE GAY WAS THE GUEST AND I DIED OF HAPPINESS.

I've only come around to liking Sarah Silverman over the past couple of years and I'm still conflicted about it. She's said and done some horrible shit in the past, but I feel like she's listening and learning and is intent on using her voice for good. At least I hope she is. 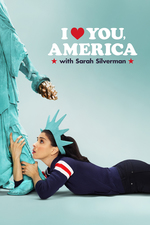