Cult Film Club: Streetwise charmer and cardshark Eddy (Nick Moran) walks into the biggest card game of his life carrying a stake backed by the life-savings of his three best mates, Tom (Jason Flemyng), Bacon (Jason Statham) and Soap (Dexter Fletcher). Eddy is the sharpest player on the circuit but the game is a set-up, and Eddy leaves owing the underworld boss "Hatchet" Harry (P.H. Moriarty) half a million. Harry gives Eddy a week to come up with the money before he starts taking fingers as collateral. (Continued)


Eddy's dad, JD (Sting) can cancel the debt by handing over his bar, lock, stock and barrel to his old adversary, Harry. JD refuses to give in, feeling his street-tough son can get himself out of his own messes. So, while Harry sends a couple of petty crooks to steal a pair of antique shotguns to add to his collection, Eddy and his mates plan a caper that will enable them to pay off Harry and make out like bandits! In a comedy of errors, and a helter-skelter ride through London's gangland, the guns, cash, drugs and identities become all mixed up as a full complement of London's lowlife get involved in a melee which even all their menace can't handle. Full of energy and surprising twists at every turn, it's a rollicking comedy that has it all, "Lock, Stock and Two Smoking Barrels."

Making of documentary
posted by maxsparber (10 comments total) 3 users marked this as a favorite
A great film and a better soundtrack.
posted by cuscutis at 11:53 AM on October 6, 2014

Closed captions or subtitles highly recommended.
posted by DirtyOldTown at 12:13 PM on October 6, 2014

Closed captions or subtitles highly recommended.
Hey, at least it's not as bad as Snatch :-)
posted by Pendragon at 12:36 PM on October 6, 2014

It's so difficult to separate this from Snatch, every time I watch either of them I keep waiting for wrong characters to appear and totally different storylines to develop.

I love every square inch of this film; it's part of the triumvirate of comedy along with Kung Fu Hustle and Shaun of the Dead.
posted by TWinbrook8 at 7:17 PM on October 6, 2014 [1 favorite]

HOW
HOW DID OUR MONEY AND WEED GET TURNED INTO A BIG PILE OF CORPSES
AGAIN
posted by Sebmojo at 8:45 PM on October 7, 2014 [1 favorite]

True story: today my mom told me she didn't know who Guy Ritchie was.

Love the film, but it's always kind of jarring to hear Dexter Fletcher do his actual native accent rather than wherever Spike was from!
posted by runincircles at 2:47 AM on October 8, 2014

While I was in Japan I found an entire series based on this show. It wasn't bad. Not as good as the movie but I'd still recommend it.
posted by Hoopo at 3:23 PM on October 14, 2014 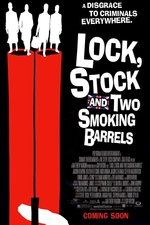