Steven, a charismatic surgeon, is forced to make an unthinkable sacrifice after his life starts to fall apart, when the behavior of a teenage boy he has taken under his wing turns sinister.


couple of reviews:
Brian Tallerico (RogerEbert.com): "It’s a film that challenges viewers in such fascinating ways and feels so refined in its filmmaking that it’s invigorating to watch. It’s a rare movie indeed that can be this alternately terrifying, hysterical, strange, and heartbreaking, often in the same scene. Like the Greek myth that inspired the film, it feels powerful enough to be timeless."

Michael Sragow (Film Comment): "In the press notes, Farrell says, “At the story’s core lies this very black and insidious sickness—a kind of carcinogen or poison that courses through the film. We don’t get an answer to what the poison is.” How true. Because Lanthimos blends pretensions and vagaries with existential whammies that give rise to conflicting interpretations, it’s tempting to call The Killing of a Sacred Deer “a Rorschach test.” But the inkblots of a Rorschach test trigger multiple associations and open up the human personality. This film devolves into single-minded scare tactics and reduces its actors to mannequins or torture toys. It drains all personality away."

Tim Brayton (Alternate Ending): "The genius of The Killing of a Sacred Deer lies in how it simply, even casually, uses the most undistinguished sort of material to wring out an effect just as thoroughly devastating as that opening shot of the throbbing organ. The filmmakers stage fucking near everything in the movie from off-putting, bizarre angles: one very simple piece of blocking of our protagonist, Dr. Steven Murphy (Colin Farrell, the star as well of The Lobster) standing several feet away from the odd young man who has grown obsessed with him, Martin (Barry Keoghan), talking on a Cincinnati rooftop, is transformed into some horrible visual mutant, with the camera drastically lower than would be standard for this kind of set up, and moving in a sideways tracking shot past the actors (who are farther back than would seem to be necessary, though this barely registers), so that the closeness of the asphalt surface of the roof sweeps by on the bottom of the frame. It's so perceptually unusual that the whole moment is charged with a feeling of dysfunction, disorientation, wrongness, and while this early shot is the first time I stood up and took notice, I quickly gave up trying to keep track of how many shots throughout the film did similar things. The camera pointing down, the camera pointing up, the camera tracking forward but so close to the ceiling that it feels like it's going to keep clipping those plastic "EXIT" signs that you get in generic institutional spaces (a hospital, in this case), and every permutation of angle, height, and movement you could think of, except for the ones that normal people use to film normal conversations."

interviews with Lanthimos:
The Atlantic.
The Independent.

Trailer.
posted by sapagan (3 comments total) 4 users marked this as a favorite
Before seeing this movie, I put myself on a total information blackout from hearing or reading anything about it other than a vague plot outline, since I'd liked all of Lanthimos' other films well enough that I wanted the experience to be fresh.

So it was kind of strange to go into the theater and have the sudden dawning realization that a good deal of the film was literally filmed within a block of my office in downtown Cincinnati, as well as the University of Cincinnati Medical Center.

The scene where Martin takes the daughter for a silent nighttime motorcycle ride through the city? That was shot on the block where I catch my afternoon bus.

The scene where he takes her up on the offer? Shot in a parking lot under an overpass, near my normal weekend jogging route.

I guess this sort of feeling is common for people living on the coasts, but I'm not at all accustomed to seeing Cincinnati actually playing the part of Cincinnati in a major motion picture. But it was as though the characters were haunting heretofore unnoticed-by-me corners of my own life, and it added an extra layer to the creepiness that very few people will get to share.
posted by Strange Interlude at 8:34 AM on December 21, 2017 [4 favorites]

It's been about two week since I've watched this, but thinking about Killing still makes me feel deeply uncomfortable, almost to the point of being angry. All of the characters seemed so devoid of humanity, and not just because of Lanthimos's way of writing and directing dialogue. In The Lobster, the characters were bumbling and volnerable. But in Killing, even though the parents demonstrated their love and terrible fear for their children, all of the relationships seemed so cold and empty. It definitely left me feel shaken.
posted by Rora at 3:36 PM on April 16, 2018

I watched this film last night. It felt a little like the Lobster, with the "whimsical arthouse" dial turned way down and the "horror" dial turned right up (and the Lobster was quite a distressing film in itself). Killing also had the uncomfortable family / sexuality / punishment elements of Dogtooth - I'm thinking of the openness about Kim's menstruation, Steven's confession to his son about masturbation (followed by the bizarre threat to force Bob to eat his own hair), Martin's attempts to set Steven up with his mother, etc. I find that Lanthimos is really expert at making the audience recognise that all families are weird, even grotesque to outsiders, and all families are groups of quite different individuals that under normal circumstances ignore certain thoughts, feelings, dynamics, etc to be able to function. It seems unnecessary to say that the film is unsentimental, but part of its brutality is the increasing lack of sentimentality about the family unit as the film goes on. (Think of Anna suggesting that they have another child, Kim and Bob competing for affection - and taunting each other about their chances of survival, Steven trying to pass responsibility for his decision onto the school principal, etc.)

Anyway. Brrrr. One of the best horror films I've seen in years. My only real complaint about the film is that the stilted dialogue makes Colin Farrell's delivery sound a bit like Father Dougal's. Although I suppose that helped to draw attention to the strand of dark humour that was in there somewhere (...who is responsible when a patient dies? The surgeon or the anaesthetist?), without which the film would have been totally bleak.
posted by chappell, ambrose at 8:56 AM on December 12, 2018 [2 favorites] 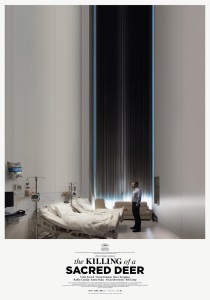