This is not a remake of 1995's Jumanji (starring Robin Williams). There are nods and connections to that original, but overall it's an entirely new story.
posted by I_Love_Bananas (8 comments total)
We saw the film a few weeks ago at an early screening and were pleasantly surprised at how much fun it was, particularly if you're a game player. Video game tropes are all over this movie and you can get a bit ahead of the plot if you're familiar with concepts like extra lives and respawning.

You just know if they make Jumanji 3, the board game will resurface as a phone app with microtransactions.
posted by Servo5678 at 4:05 PM on December 26, 2017 [2 favorites]

I enjoyed it but wish it had played against the tropes a bit harder. They call out the skimpy girl clothes by having her sort of cover herself up with a jacket and then have her thrown into this ridiculous gendered segment that goes on way too long. They call out that the Token Black Game Character is basically a slave but never go anywhere with the realization.

I really liked Dwyane Johnson's insecure person stuck in The Rock and as awfully over the top as Jack Black is I really liked his homage to teen girls. He had way too much fun.

I also liked the way they win is an exploit of gameplay. There are two instances where they use the way the game operates against itself and I thought they were nice touches.

The Nick Jonas hotness as a kid growing up to be Colin Hanks as a middle-aged metal head was pretty great but also made for a really awkward scene.

I caught it at the Amazon Prime early showing and it was completely packed. I was actually kind of surprised. A oddball benefit of having prime but having their own movies in theaters and now with early showings really shows they're out to beat Netflix at the original content game.
posted by M Edward at 4:43 PM on December 26, 2017

A question for folks who've seen it: how bad were the gendered jokes, considering the movie (from what I can see in the trailer), did some gender bending? I'm interested in seeing it, but one "I'm a woman trapped in a man's body" joke or something similar and I'm out of there.
posted by joycehealy at 7:58 PM on December 26, 2017 [1 favorite]

joycehealy, re: gender-swap jokes. Of the four high schoolers, the instagram-obsessed 'pretty girl' character ends up in the body of Jack Black. Each of the characters has their own jokes re: was big/am small, was small/am big, was wallflower/am Action Lady; and was teen girl/am Jack Black is not played differently in kind or amount of screen time.
It's not a subject that shapes my personal identity issues, so maybe don't take my word for it, but it...wasn't too awful in the way it was handled?

There's an initial surprise gag - 'aah! I'm a fat middle aged man and my phone is gone!' where the two were weighted as more or less equally upsetting to her, if that's any indication.
There's a peeing in the woods with unfamiliar equipment scene and a spontaneous-boner joke, and when swapping bodies back there's a fond 'so long dude' to her male crotch, then an 'I missed you, I'll never complain about my body again!' to her restored breasts.
So...pretty high school girl gets a penis temporarily and is...kind of into it?, in a so that's how that works, weird! satisfied-curiosity way. No one's cruel or insulting, no one's mocked or laughed at. But that humor might be dealbreaking for you.

But that doesn't address (and neither does the movie) those who have very real-world issues with the gender of the body they're in. Someone else will have to weigh in on how the scenario made them feel.

Oh, say, does a Bechdel-Wallace test count if one of the participants is wearing a male body temporarily? Because there's a pretty good if short conversation between the two women characters about high school identity politics and judgmentalism, with the twist being that one is played by a fat man with a beard.
posted by bartleby at 12:50 AM on December 27, 2017 [5 favorites]

Really enjoyed this until it got to the f'ing pointless 'hey lemme teach you how to seduce and be sexy' section. Sure they swerved into 'oh actually I am a fighter and can just punch them' but not before giving the teenage male gaze camera what it wanted. Shame really (is there a quota somewhere? That every action film with a 'strong female lead' has to include a seduction section?) soured the rest of a solid popcorn flick.

I mean not to get too highminded about it, but it does lean into: being a man is natural, being a woman is taught. All men need to do is have penis (Jack Black's (fun) character is basically this) while women need to be learnt. Sure there's pressures of masculinity with the nerdy guy but that's played more as him growing into being a Man rather than having to learn it. I know, I know, shouldn't expect gender play in a Hollywood flick but think how much more fun this film could have been if they did.
posted by litleozy at 11:02 PM on December 27, 2017 [1 favorite]

I loved this dumb stupid fun as heck movie and would happily watch 100 more just like it.

The actress who played girl Martha was also girl Veda in the Mildred Pierce miniseries, if you want to see more of her on screen. And I just saw boy Spencer in My Friend Dahmer a few days ago.
posted by phunniemee at 3:15 PM on January 27, 2018

Let me see if I've got this right.

Spencer is a white Jewish boy, who coincidentally is a hypochondriac, cowardly, nerdy momma's boy, and whose sole sense of self-worth seems to derive from being good at video games. Fridge is a black boy, who is referred to by the name of an object rather than an actual person's name and has committed the grave sin of being ungrateful for Spencer's botched attempt at helping him. Fridge is tall, strong, and athletic, and is suggested to be having sex (!) with a woman (!!), unlike Spencer, who is thus made to look pathetic in comparison.

Then they're sucked into a video game, where Spencer becomes a tall, strong, and athletic man whose super power is literally being sexy and whose back story makes him the most important person in the game by default, and Fridge becomes a short, cowardly, nerdy man whose super power is literally being Spencer's servant and whose back story is about how he gladly serves Spencer out of sheer gratitude. Since the game works on video game logic (and is therefore oddly less sophisticated and complex than the board game from the original Jumanji, which this movie nevertheless wastes no time making fun of), Spencer is now valued and respected precisely because he (and, for some reason, not the black boy nor the two girls his age) is a gamer and understands that logic.

After their adventure through the game, during which Fridge suffers two humiliating deaths, the first of which has no purpose other than pure comic relief, and the second of which is partly a justified revenge killing by Spencer that his teammates literally laugh at him about, Spencer and Fridge each learn a valuable lesson that they take back with them to the real world. Spencer learns that all he has to do is man up, and he too can get a girlfriend without changing anything else about himself. Fridge, on the other hand, learns that he was wrong to not want to hang out with the white male main character anymore.

All three Jumanji films Jumanji, Zathura (Jumanji in space in everything but name), and now Jumanji: Welcome to the Jungle - are all perfectly fun family films. I went in with low expectations for this one but was plesantly surprised.

The video game tropes exploration seemed to come from a place of loving fandom, and it was well paced. 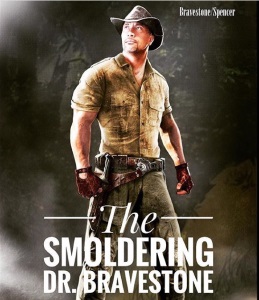