A Seattle history professor, drawn back to his estranged family on the Oregon coast to execute his late mother's estate, is reacquainted with his best friend from childhood, with whom he has a long-awaited tryst. The expectations placed on him by his family pile up, and he learns that home is never really what we remembered it to be.


62/28 on Rotten Tomatoes, "Cthulhu probably stands as one of the more controversial attempts at bringing the Cthulhu mythos to the screen, exploring certain themes completely absent from H.P. Lovecraft’s fictional writing. It’s a totally modern take on the novella The Shadow over Innsmouth that, at its core, still ends up feeling like a very true embodiment of Lovecraft horror."

Oh, the Horror: The Making of 'Cthulhu'

The Lovecraft short story "Shadow over Innsmouth" concerns a man who takes an archaeological interest in a small New England town, only to discover that its people worship a sinister fish-god called Dagon. Soon he learns that his own ancestors interbred with a race of amphibious monsters on the site, and that he's in danger of becoming a monster himself. Cogswell saw in the story's subtext a horror of small-town life that he says resonated with the experience of gay friends: "I knew folks who grew up in these backwoods places and then in their 30s, one of their parents died or had a stroke, and they had to go back and face their past." In Cthulhu, the protagonist is a gay professor at Cascadia University (played by Seattle University), who is called back to his hostile Oregon hometown in order to execute his mother's will. Gildark and Cogswell explained how the "latitude of the horror genre" and the "huge metaphors" that other horror films have exploited will allow the film to take on even broader themes, from suburban sprawl to free-floating anxiety about politics in this country.

The Horror
- Making a Film in Seattle Can Destroy You, Grant Cogswell

If we couldn't sound an alarm that would help awaken America to our growing ecological disaster, we at least hoped to scream into the gathering darkness. The former may be beyond the reach of art. As for the latter, Cthulhu is hardly the timely, minor classic we thought we were making. I didn't know until the edit how truly little the form accommodates. It is gorgeous, though, and interesting. We will be very slow to repay our investors, some of whom sacrificed hugely: We really thought we had the zeitgeist, that this thing would sell for millions.

The best part of Cthulhu, though, is the additional material on the DVD. Director Gildark and screenwriter Cogswell offer a crash course in independent filmmaking for aspiring auteurs, assessing their own film (and its shortcomings) with refreshing candor. Cogswell suggests that “the movie is not what I wanted it to be” and that it “doesn’t really work”; both he and Gildark conclude that their ambitious vision was undone by both their small budget (under $1 million) and their inexperience making movies. Was creating a script with 85 different locations a good idea, for instance? Cogswell and Gildark laugh at their own overreach (which explains why Tori’s character works at Sea Lion Caves further down the coast in Florence — a mere four hour daily commute — because it creates a cool-looking backdrop for a scene). Cogswell calls his own script a “trainwreck,” and both characters snicker at its “patchwork” feeling, ultimately agreeing that for them, it’s “not like watching a real movie.”

I watched this with friends as part of a bad movie weekend about five, maybe six years ago.

I can remember nothing about it except for one scene.

One scene I still occasionally have nightmares about.

It's the scene where a fully clothed Tori Spelling nuzzles against someone like a giant feline, to show affection.

I dont know why but, her motion, and expression, creeped me the hell out.
posted by Faintdreams at 3:06 PM on December 29, 2017

Is this delightfully terrible or just terrible? Asking for a friend.
posted by ActingTheGoat at 8:46 AM on December 30, 2017

As I recall it, the film is... fine? It suffers from a low budget and fairly weak actors, the sound is often muddy, and the third act is a little lifeless, but I’ve seen much worse.

If that seems like I’m damning with faint praise, I am. There’s no particular reason to watch this unless you are extremely interested in Lovecraftian film and want to see a somewhat unusual take on the genre.
posted by GenjiandProust at 9:30 AM on January 2, 2018 [1 favorite]

I finally got around to watching this, and it was really... "uneven" is maybe the word for it. Some scenes seemed perfectly well-planned, shot, and acted, and then others are on par with The Room. It almost seems intentional sometimes. Memorably, when the protagonist freaks out about a peanut butter sandwich, and another scene where he picks up a cat from offscreen and then just nuzzles it through a few conversations where it's never mentioned before, during or after.

The core concept and plot are actually pretty good. I'm all in for Lovecraftian stories that would have HP himself rolling in his grave. The cultiness and true horror of unreasonable familial expectations is solid.

A strange film, but it's clear that someone really cared about making it and was doing they best they could with what they had. 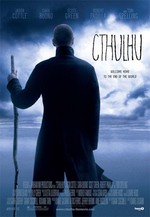