An FBI agent and an Interpol detective track a team of illusionists who pull off bank heists during their performances and reward their audiences with the money.
posted by ellieBOA (17 comments total) 2 users marked this as a favorite
I like magic and all the silly now you see it, and certainly enjoyed the movie but it also made me a bit crazy at the harry dog storyline of the plot. The sequel was even less rational.
posted by sammyo at 4:39 PM on December 31, 2017 [2 favorites]

Every bit of this movie is bad.

I feel like it's so off kilter that it hits the level of 'not even wrong.' Like, does it even technically rise to the level of telling a story at all, or is it just a fever dream that somehow got greenlit?

(For comparison: I hated Left Behind or 2012 - that was the point of watching them, to learn about horrible things - but I could tell you what happened in them.)
posted by mordax at 8:53 AM on January 1, 2018 [1 favorite]

I love this terrible movie and its terrible sequel. I'm not even sure I can explain why except that it so thoroughly appears to believe its own bullshit that it becomes charming.
posted by restless_nomad at 9:41 AM on January 1, 2018 [6 favorites]

I know this reveals me as a conspiracy wonk, but the most complete interpretation of this movie is as a recruitment tool/love letter to "The Illuminati" (come join The Eye), as well as a threat to its adepts should they attempt to speak out.

There is a whole load of subtext and symbolism (the eye, the pyramid, etc.) throughout the film, and it goes to great lengths to paint the "skeptic" as the ...bad guy? For his efforts to reveal the smoke and mirrors behind the artifice being pulled on the masses...he is framed and left to rot in jail? Remember, he's trying to undo the plot of the "Four Horseman."

Also, the chilling final words of the film: "Come in close...closer...because now you know our secret...we could be anywhere, watching you...we're looking for someone to help us with our next trick..."

Another layer involves the Shrike Tree and its relation to the Hyperion canon; in this case, the Shrike and the Tree of Pain and its relation to Satan and the demiurge. (That's the rough of it; I plan on making a video series of esoteric symbolism in mainstream culture, so I'll spare the specific details for now.)

Now let's take the sequel: again, everyone member of The Eye is "in" on it. And really, all you need is the final scene: Morgan Freeman's character is revealed to be the "grand architect" and leaves all our heroes by telling them, "Look behind the curtain!" And sure enough...a curtain. (Can we get anymore literal?) They proceed through the curtain and end up at the top of a staircase of an...eye-shaped tower. Cue the final monologue: "Seeing is believing...but is it truth? Depends on your point of view. Are you listening, Horseman? When you emerge -- and you will -- I will be there, waiting. Because mark my words: you will get what's coming to you, in ways you can't expect, but very much deserve. Because one thing I believe in is an eye for an eye."

I watched this film late one night when I had a flu and couldn't sleep for digestive reasons. I was never sure if the fact that I thought it was incoherent and bizarre was the fact that I was feverish and ill or if it was the film. Thanks to this thread, I have an answer.
posted by nubs at 1:12 PM on January 1, 2018

This movie really, really made me crave a stage magician heist movie. Can you imagine how fun that'd be?
posted by meese at 12:19 AM on January 2, 2018 [6 favorites]

it so thoroughly appears to believe its own bullshit that it becomes charming.

To me, it crossed over the line and became smug. This is the kind of movie I'm predisposed to like, but that's the number one potential flaw of the genre.
posted by praemunire at 10:48 AM on January 2, 2018 [1 favorite]

For me, this is a ridiculous script redeemed by terrific, fluid direction and some entertaining star turns.

Part of me wants to say that if Leterrier ever got a great script, he might make something truly special. Because he also pulled sheer fun out of his ass on the original Transporter and to some extent even with the jumbled mess that was The Incredible Hulk.

But then I remember that his Clash of the Titans was unwatchable. And then I start to think that he's running out of chances to prove he even cares what the script is like. Maybe he's like Robert Rodriguez, a kinetic, energetic wonder of a director who is apparently never going to go to the basic trouble of securing a well-written script to work from.
posted by DirtyOldTown at 12:00 PM on January 2, 2018

It's still a creative crime that the sequel was not called Now You Don't.

This is the pettiest hill upon which I will die. It makes this movie at least 10% worse in hindsight (and that is saying something) and renders the sequel unwatchable, if you ask me.
posted by Rock Steady at 1:15 PM on January 2, 2018 [3 favorites]

I thought that it was a fun movie. Isla Fisher is pretty (and Lizzy Caplan is super fun in the sequel).

But ultimately it just felt incredibly hollow; like, all the tricks/illusions are fake (although the card handoff thing in the sequel was cool).

I agree meese - this left me craving a proper stage magician heist movie*.

A film like 'The Prestige' was much more satisfying because the illusions had substance behind them.

*I was at a neuroscience conference and they brought in a stage magician and a prestidigitator in for a in-between-sessions presentation and called up volunteers to demonstrate misdirection (hacking neurobiological bases of human salience/attention). The audience caught most - but certainly not all - of the tricks as the prestidigitator essentially stripped his volunteer without them knowing, while explaining what he was doing/did. The volunteers were definitely not plants.

A heist movie with that level attention to detail would could be awesome.
posted by porpoise at 2:13 PM on January 2, 2018 [6 favorites]

It’s such a lazy movie. They couldn’t even be bothered with actual magic tricks a lot of the time but rather use bad CGI and hand-wave the mechanics of the tricks away. Ugh. The film doesn’t even care for its own subject matter enough to respect the craft or to go all the way and have them be actually magic.

For all it’s frivolity the whole thing feel really cynical and joyless.
posted by slimepuppy at 2:50 PM on January 2, 2018 [7 favorites]

It's still a creative crime that the sequel was not called Now You Don't.

I love magic and wanted to like this movie so much, and.... Did not like it so much. The incoherence of the script is matched sadly by the stupidity of the magic.
posted by smoke at 12:39 AM on January 6, 2018

I enjoyed it as a bit of who-cares-what-happened fluff, probably mostly because of how many of the actors I liked and the various spectacles.
posted by phearlez at 12:35 PM on January 9, 2018 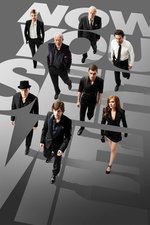