A former boxer-turned-drug runner lands in a prison battleground after a deal gets deadly.
posted by paper chromatographologist (8 comments total) 5 users marked this as a favorite
I thought this movie was great! The violence was completely nuts, as was the plot, and casting.

It seemed like it was written and shot for someone built like Dwayne Johnson, but there's Vince Vaughn standing there. He's a movie tough guy sort of like Lee Marvin and John Wayne were: big, but not freakish or even really ripped. The viewer is basically just asked to accept that he's a force of nature. I feel like this makes a more enjoyable movie somehow.

Also, I guess I just love this kind of movie violence.
posted by paper chromatographologist at 3:03 PM on January 3, 2018

I also like these sort of elevated genre pieces. Genre with a slightly bigger budget. It was a tad too long though. I think it would have worked better if it was told in a more economical manner.
posted by Falconetti at 1:34 PM on January 5, 2018

The lack of soundtrack in "exciting" scenes probably made this movie for me. I wish filmmakers had the guts to do that more often. Soundtracks have become so rote that, even though I pay little attention to them in any case (which is my fault), I notice when they aren't there (the point being how rare is that, in terms of how attention works).

Based on comments here I thought this was going to be a bloodbath, such that I might not even be interested, so for prospective viewers I would say it has very violent depictions in the key violent scenes, but it's not filled with violence. If I'm not mistaken, the first violent scene (excluding a standard gun fight) doesn't even occur until 1h10 into the film. (There is implied violence towards the protagonist's wife, who is kidnapped, but none depicted or occurred.)

The rest of the film felt restrained (see soundtrack) and that is largely why I liked it. That man-of-few-words, efficient protagonist trope. No time is spent lamenting his fall or blaming anything for it. I didn't mind the length, as I felt like a lot of characterization and plot gates were moved through in an efficient way--while the movie I watched after this (S King's 1922 on NF) was 20m shorter and I was still "ok, wrap it up"--never happened here.
posted by sylvanshine at 5:24 PM on January 6, 2018 [2 favorites]

The film is also very good at leaving scenes that are so common that they can be left to the imagination—to the imagination. Once the prison guard puts on the rubber glove, the scene is over. There is no "gradually becoming hostile toward a gang in the prison yard"—which in turn might have required a "one prisoner who the protagonist can get friendly with" exposition—just one quick encounter.

I suppose what the film does so well is tease the protagonist's violence, numerous times, in just the right amount. How can a film feel so efficient while including scenes that are "teases"? It's an accomplishment.
posted by sylvanshine at 5:36 PM on January 6, 2018

If I'm not mistaken, the first violent scene (excluding a standard gun fight) doesn't even occur until 1h10 into the film.

He fucked up that car pretty good tho in the first reel.

But also this is a seriously violent film. Even more so than Bone Tomahawk, which had just one scene that sent people running for the door. Yes, the violence only hits in a few key moments, but JESUS CHRIST does it hit. I know what you mean by "restrained," though -- I suspect the real bone-cracking element here is the sound mix, which is brutal!

I love this film. I liked Bone Tomahawk a lot but this is even more magnificent. It's no Phantom Thread but it's definitely one of the movies of the year for me. I wish the director weren't hooking up with Mel Gibson for his next picture, but I guess I'll just have to see what he does with that.
posted by Mothlight at 9:24 PM on January 8, 2018

Just watched this and really enjoyed it. Great character and great performance from Vaughn. Darkly comical in the same way that Bone Tomahawk was and there’s a real ear for dialogue throughout.

Not the movie I expected but absolutely what I wanted. I’m surprised I haven’t heard more about this.
posted by slimepuppy at 1:39 PM on February 9, 2018

Just caught this after really enjoying Dragged Across Concrete, appreciated that this had a lot of what made that great - pacing, dialogue - but was also pretty funny and genre-ish. Love how abject the final prison was for Vince, like broken glass everywhere and a Fortress-style intestinator?? Alright, yeah!
posted by nicolas léonard sadi carnot at 4:42 AM on September 28, 2019

I am antipathic to Vince Vaughn (and I mistook him for Vincent D'Onofrio for a second) - but Vaughn was effective here.

I bought that he was/ is hard, decided that he doesn't want to hurt people - anybody - anymore, is/ became a decent person (and seriously seriously worked on his anger management, re: locker at work after getting fire), and loves his wife very much. But being that kind of person, he realizes that he fucked up was willing to handle the consequences and societal injustice (extra years on sentence, treatment of convicts) BUT realizes a bad individual is furthering injustice so he accepts what he must do and the further consequences to that.*

The violence is raw, but never superfluous.

I understand that it's part of the narrative, but that he felt the need to "protect the police" (?!) by killing his psychotic temporary workmates didn't work for me. If it was to remove witnesses, the interrogator suggested that he could have walked away.

That he is such a "force of nature" challenges suspension of belief, but I guess the car wrecking scene establishes that he's a mutant.

The other big wtf for me to overcome was how compliant DOJ was to grant his wishes to escalate his security status (unless the extra-national gangster actively helped things along), but even then he'd be sitting in solitary for weeks before the paperwork/ legal process got done.

Quite liked this, though, as a quiet(er) study of condensed personal violence. More believable than Gerard Butler's 'Law Abiding Citizen' though.

Interesting quirk to add in old-school low-quality grindhouse effects (face scraped across the floor, jaw shattering out of a face) with decent ones like the open fractures (broken bones sticking out through the skin). Edema and scabbing is hit and miss.


The one thing that's still got me weirded was the cross tattoo on the back of his shaven head. Any significance? My original read was shithead skinhead or shithead "celt" - who has hairloss and can't cover it up (but then, why no hat?).


*giving the utterly deplorable prisoner the stun gun - that's so in character
posted by porpoise at 9:30 PM on November 29, 2020 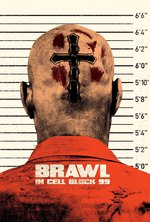