Black Lightning is recruited to rally against The 100 gang. Anissa investigates the new drug hitting the streets. Meanwhile, familiar faces begin to reappear.


AV Club - Black Lightning reckons with the violence of revolution

Den of Geek - Jefferson Pierce continues to deal with the limits of his power as a dangerous new drug enters his community.

EW - While Jefferson confronts a new drug problem in Freeland, Tobias strategizes how to get back at his old foe
posted by oh yeah! (11 comments total) 2 users marked this as a favorite
I'm still enjoying this a lot, despite the rough spots.

This time:
* Gambi will live to regret hiding Anissa's exploits. (Unless he doesn't, I guess.)
* I love Anissa's subplot extra hard. Them showing her really feeling what it would be like both to have powers and beat people half to death is really something, and I'm glad they're going there on all counts. (It reminds me of things I wanted to see out of Buffy, but never did. I'd almost rather watch a show centered on her, much as I love Jefferson.)
* Jennifer and Khalil's scenes were pretty heartbreaking. Her quitting track for him was a great touch.
* Loved the X-Ray vision moment. Jefferson's glee was infectious.
* Loved the selfie gag even more. I could totally see that happening.
posted by mordax at 12:56 AM on February 7, 2018

My initial thoughts:
- I'm glad that there's some reason that Black Lightning isn't instantly wondering what Tobias Whale is up to, given that Tobias was BL's prior nemesis -- Gambi's sketchy deleting of crime scene evidence in the prior episode made me question what good it would be, but it sounds like Tobias was a crooked politician, and how has (mostly) gone into hiding, so Jefferson wouldn't have him pinned as suspect #1 for mastermind behind The 100
- Poor Khalil, on top of being unable to run again*, you have the worst luck with older dudes getting creepy around/ to you
- Tobias, don't you see how you're giving off strong villain vibes here? Popping up, in the dark, in a sleeping kid's room after you bestow gifts upon him as an anonymous benefactor, saying " You mind keeping the lights off? They hurt my eyes." And then you lay it on heavy how Black Lightning is really a bad guy, when just about everyone on the street (minus the gangster-types) is saying Black Lightning is the local savior

* Jennifer and Khalil's scenes were pretty heartbreaking. Her quitting track for him was a great touch.

Was it just me, or was he not too focused on her when she said she was quitting track?

Jennifer: So, I quit the track team.
Khalil: What? For real?
Jennifer: Mmm-
Khalil: Huh.
[COMMENTATOR SPEAKING INDISTINCTLY ON TV]
Khalil: You know what? I'mma do it. Yeah. People should see that it takes more than a bullet to keep me down. Hey, we gonna do it together, right? You're my ride or die, right?
Jennifer: Yeah. Yeah, ride or die.

He seemed more focused on himself, and having his girl at his side. After last episode, I was excited that Jennifer realized she could be her own ticket out of there, and not have to rely on Khalil's future successes. Not that she'd leave him, but if they left the town together, she'd be the strong one in their couple. Now? I'm not sure what she wants to do.

Question: is Green Light a tie-in to another, green light-focused universe/ world/ series/ character? Or just a weird name?
posted by filthy light thief at 11:50 AM on February 7, 2018 [2 favorites]

Was it just me, or was he not too focused on her when she said she was quitting track?

No, I noticed that too - it's part of what's heartbreaking about it. After an incident of violence like that, it seems to me that a lot of relationships slowly crumble beneath the strain, especially ones that weren't fully established yet to begin with. Jennifer and Khalil weren't in a strong, committed relationship yet - they'd only just decided to try being together.

Now, all of the sudden, she doesn't want to leave him in the middle of all this, wants to focus and help, but she also knows she'll never have the life they wanted.

Khalil's situation and outlook are necessarily getting worse right now, not better.

The reason this was heartbreaking to me is that given the realism of most of the relationships depicted on this show, I think we're seeing the opening moves in the two of them coming apart in slow motion, very painfully. (And that it'll be worse with Tobias in the picture, goading Khalil and pulling strings.)
posted by mordax at 12:54 PM on February 7, 2018 [1 favorite]

i thought it was mentioned in the first episode that Jefferson thought Tobias died? I remember thinking it's funny that each of them thought the other died.

I liked this episode overall. I can't wait to see how Anissa will grow into her own superhero.
posted by numaner at 4:21 PM on February 7, 2018

I kind of like the Veteran/Origin Story duality going on.

The quality of how the violence is shot feels a bit uncomfortable to me, but I might be having a bad week.
posted by GenderNullPointerException at 7:39 AM on February 9, 2018

I'm going to be interested to see when - hopefully not if - the daughters find out dad's secret identity. It seems to be getting pretty well set up for a subject of even more conflict than it would have been all by itself.

Jennifer's boyfriend is getting groomed to have a real hate-on for Black Lightning, which by itself could be a wedge between the sisters if Anissa's vocal support of him continues. Either because J gets sucked in along with Khalil or just because she finds herself between two people with rabidly opposing views on the matter.

Jefferson is unquestionably not going to be down with Anissa out playing super, so does that come up before or after or simultaneously with his own secret? In traditional Berlantiverse surely we'd have a long stretch of Jefferson arguing against it without coming clean himself, leading to future legitimate) anger over hypocrisy. Here's hoping this show's divorced enough from the others not to suck into the same nonsense.

We're already into borderline stupid with no sign of Anissa wondering exactly why she can do this stuff. She's giving it enough thought to figure out she has to focus her breathing to make use of the powers but she's not at all concerned they've cropped up? Most of us get twichy when we spot a new mole.
posted by phearlez at 9:47 AM on February 9, 2018

phearlez: To be fair, we did see her in the library looking up genetics, so I’m guessing she’s been researching it herself - even if she hasn’t been talking about it with others.
posted by adrianhon at 1:12 PM on February 10, 2018 [2 favorites]

* Gambi will live to regret hiding Anissa's exploits. (Unless he doesn't, I guess.)

Vice Principal Kara Fowdy is a villain, no doubt. She's looking for some way to undermine Jefferson and take his job. She was weirdly flirty with him one episode, now she's maneuvering him into conflict with the board.

This conceit of a new super drug "like crack and PCP had a baby" that addicts after one dose is pretty lame. I mean it's a common enough plot device, it's just so 80s.
posted by Nelson at 10:34 AM on February 15, 2018

Wow, I don't know if I wasn't in the right mood while watching this episode or if quality has just gone downhill fast.

Black Lightning literally stopped a hail of gunfire from hitting multiple people at the march. That gunman was shooting right at the entire group, with the Reverend out in front. In this episode the cop brings this up Reverend Holt and Khalil's injuries as indirectly caused by Black Lightning. Then Tobias is trying to convince Khalil of the same thing. Unless everyone suddenly has a crazy case of amnesia, how could the one bullet fired later be spun in any way as his fault? Like, what? If there had been no shooting until he arrived and escalated things, then I could see it, but... what?

And the decision Jefferson has to make about the board makes zero logical sense. Which I guess doesn't mean that it's not plausible, because politics. The choice he has to make is save this kid and give up the final say on severe infractions or expel the kid and keep final say. What is this deal!? Again, not really crazy that a false choice is being offered by a school board, but I'm surprised Jefferson doesn't call this out or even seem to recognize it.

Oh my god this sequence drove me crazy. On shots of Black Lightning he's looking back and forth, taking it all in and grinning. Then it cuts to X-Ray shots that are perfectly still.

i thought it was mentioned in the first episode that Jefferson thought Tobias died?

He says that Black Lightning's purpose was "to kill Tobias", if I remember right. In response to Gambi's assertion that his purpose was to save Freeland or the neighborhood or... not sure exactly, but something like that.
posted by ODiV at 8:43 PM on February 15, 2018 [1 favorite] 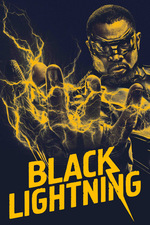