Ron Charles, The Washington Post:: "Alderman has written our era’s “Handmaid’s Tale,” and, like Margaret Atwood’s classic, “The Power” is one of those essential feminist works that terrifies and illuminates, enrages and encourages. ... The whole novel is powered by an alternating current of horror and wit."

Amal El-Mohtar, The New York Times: "Alderman’s prose is immersive and, well, electric, and I felt a closed circuit humming between the book and me as I read ... World-building quibbles aside, it’s difficult to bear the conclusion that the horrors of our times are inevitable and inescapable: that there will always be abuses of power, that the arc of the universe doesn’t bend toward justice so much as inscribe a circle away from it, that if our world were destroyed and rebuilt with women in charge it would look exactly as it does with men in charge."

Sophie Gilbert, The Atlantic: "Alderman describes it as a “novel of ideas,” and she dedicates considerable effort over its 378 pages to imagining how the sudden ability in women to inflict excruciating pain on men might upend the order of communities all over the world. Each of her primary characters seems to represent a particular pillar of society—politics, religion, media, crime—which allows Alderman to examine the manifold implications of the power’s arrival."

Bridget Read, Vogue: "A world run by women has long been imagined here, wistfully, as utopia. This distressing, introspective novel explores the many reasons why a paradigm in which gender expression aligns with power—physical, economic, political—is perhaps not the organizing principle for a better world that we want it to be."

MeFi's own Naomi Alderman is an English author and novelist, plus the co-creator of Zombies, Run!. Interview with the Guardian; Interview/book feature with NPR.

Alderman and The Power, previously on MetaFilter: Dystopian dreams: how feminist science fiction predicted the future
posted by Kybard (8 comments total) 8 users marked this as a favorite
My own thoughts on the the book from Goodreads:

Kind of staggering by the end; the framing device is initially more like "clever" but by the end it's brilliant and moving and chilling all at once.

The book has a bit of an odd momentum and surely has some bits that will age less well (and I kept thinking things like -- would something like Google last in that same basic incarnation for so long in this kind of scenario?) but it's a compelling thought experiment pulled off with a lot of grace, care, and empathy at just about every angle; a powerful mix of cynicism and hope, and an energising willingness to muddy clear water; just the things I want out of any speculative fiction.

To expand on that: I was hesitant about the framing device initially, but the way it's used at the end is more than just a (very Twilight Zone-esque, in its way) punchline about psuedonyms; the discussion about evolutionary psychology is such an intentionally absurd parroting of the same sorts of gender essentialist conversations that happen all the time.

The ways this is both true and much more complicated than that are expounded on at such beautiful, delicate, thoughtful length in the novel. I love how "feminine" and "masculine" get twisted all up and tossed around in every single character, how just about every trait that's ever been assigned a gender gets exemplified in its "opposite".

Into the weeds a bit, some random plot thoughts: If it's not clear, I just finished this book earlier today and feel like I could talk about it forever...
posted by Kybard at 12:41 PM on February 8, 2018 [1 favorite]

I ordered this book purely because I liked Zombies, Run! so much and wanted to throw Alderman another buck or two, and was delighted when it turned out to be one of my favorite books of the year. I very much appreciate that she took a feminist-revenge-fantasy concept (which I took enormous glee in) through to its logical conclusion and made it Complicated. I'm not 100% sure I agree with all of her conclusions, but I can't argue that the fundamentally cynical position she takes on humanity is inaccurate.
posted by restless_nomad at 3:21 PM on February 8, 2018 [1 favorite]

Just finished it. Holy shit. What a book. I think the realest part for me is how the US military was like "yes, let's train these women to be super warriors!" and the military-industrial complex privatization arm of the Northstar training camps also felt totally spot on.

I have complicated feelings about the book, and like restless_nomad I'm not sure I automatically think women would wield power the same way men wielded it against them. But it is definitely a cautionary tale, and throughout the book I had the mantra "absolute power corrupts absolutely" clanging around in my head.
posted by mostly vowels at 3:57 PM on April 24, 2018

Partly my objection is that everything shifts too fast - not just within a lifetime but within a couple of years. That's not enough time for everyone to just swap cultural conditioning - I think it would be much messier and more varied than that, and take quite a bit longer for some things. Partly, while I hesitate to give too much credence to biology, I think that estrogen-dominant people and testosterone-dominant people have substantially different patterns of emotional response along fairly consistent lines when taken as populations (a friend's account of the difference in some of his reflexive responses when he started taking T backed that up, and his experience seems not at all atypical.) Casting women-with-power as exactly the same as men-with-power is useful when making an argument about the nature of violence in society, but it's not at all useful when looking at gender as an thing that has some biological basis (if not quite as black-and-white as we usually shorthand it.) I think she was much more interested in the former argument than the latter, and that's fine, but it's an imperfect vehicle.
posted by restless_nomad at 5:20 PM on April 25, 2018 [1 favorite]

And not just biology. These women are discovering their power after childhood; they've already been socialized to behave differently.
posted by tofu_crouton at 6:09 AM on April 26, 2018

Well, I just spent the better part of the last 24 hours inhaling this book and boy do I have a lot of thoughts about it!

It really is very much a novel of ideas, which I loved. Her ideas about the source of patriarchy being men's physical strength are not uncommon, sure, but I love how she uses the concept of The Power to really play that idea out and examine in great detail what it might look like if that were reversed. I don't necessarily agree with all her conclusions but it was really exciting to see it play out.

I found the first half exhilarating. First, it was just viscerally exhilarating to live in a world where girls and then women were discovering this great power. I had no idea how much I would enjoy that. But also, I really loved her characters and the world-building. Especially the Tunde and Allie chapters - those were so great for showing how the power changed everything.

I didn't love the last third (of the "original novel") as much. I thought the plot got a little harder to follow, and I wasn't entirely clear where everyone ended up. Were Roxy and Tunde together? Did any of the characters we were following survive? Also, I wasn't really sure what the result of Allie's epiphany was at the end. Did that lead her to being part of the cataclysm? If so, was that actually an epiphany? It was a powerful moment, but did it change anything? I'm actually really curious to hear if anyone else has thought/theories about this. (though I realize not many people will read this at this late date!)

I did love the letters back and forth at the end, such a great and entertaining way for the author to tell us what she thinks about our current gender politics and how we view history.

One thing I thought was interesting was that she chose Bessarabia for the new country of women, and the site of all the repression and human rights violations at the end. Bessarabia was also the site of the Kishinev Pogroms (the city is now known as Chișinău, which shows up in the beginning of the book). Naomi Alderman certainly knows this, as she is Jewish and has written a lot about Jews. Interesting historical resonance.

Putting this in small text because it's persnickety, but I was a bit irked by what seemed to me to be a bunch of factual errors. But the author clearly knows her shit, and I'm guessing she did a lot of research for this book, so I'm wondering if this is supposed to be an "unreliable narrator" thing, since it's being written by a character 5,000 years in the future. But then that makes me wonder how this author knew all that stuff about WWII but not that it was largely waged by men ... and I should probably just leave this line of thinking alone.
posted by lunasol at 6:37 PM on August 11, 2018

I think that was absolutely intended to be an example of where the author's biases filled in where there wasn't incontrovertible evidence to the contrary, like how we assumed Norse warriors were exclusively men until we could DNA-test some of the corpses.
posted by restless_nomad at 5:15 AM on August 12, 2018 [1 favorite] 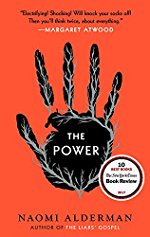