Derek Waters has a drink with Kirby Howell-Baptiste, Crissle West,and Suzi Barrett to talk about Civil Rights. Emmeline Pankhurst (Tatiana Maslany) and Edith Garrud (Maria Blasucci) leading the Sufragettes literal fight to vote in England, the Birmingham Children's March with Gwendolyn Sanders (Eris Baker) and Dr. Martin Luther King Jr. (Sheaun McKinney), and Dr. Frank Bowe (Sean Berdy) and the Section 504 sit-in led by Judy Heumann (Ali Stroker).
posted by lmfsilva (4 comments total) 2 users marked this as a favorite
One of the best parts of Drunk History is when the re-enactment just rolls with the guests start going a bit off-rails, but it absolutely cracks me up when the prop department ups their game, like the newspaper MLK is holding. I'm a sucker for these kind of silly details.

Worth pointing out their did absolutely the right thing with the Section 504 bit, and got actors with disabilities for the roles.
posted by lmfsilva at 10:26 AM on February 21, 2018 [5 favorites]

(oh, and the timing to make a story about the Children's March couldn't have been better, even if for very unfortunate reasons)
posted by lmfsilva at 11:03 AM on February 21, 2018 [1 favorite]

lmfsilva I agree with all of your comments. (I heard my spouse literally spit-take as the newspaper headline rose into view.) And thank you for posting these to FanFare this season!

Sean Berdy was GREAT, Eris Baker was too, ALL of these narrators were awesome, and I am renewed in my enthusiasm for Section 504 compliance and other accessibility measures in the websites I work on!

It always makes me happy getting to see actors of color and actors with disabilities getting work and recognition on Drunk History and -- I'm guessing -- often they get a kick out of getting to portray historical heroes.

I see the next episode is literally going to be titled "Underdogs" which crystallizes one of the biases (which I love in the show's spectacle, don't get me wrong) in Drunk History's narrative stance. It's often sort of a Great Man theory of history, it's just that most of the time we're not talking about kings, generals and presidents, we're talking about individual spies, artists, protesters, journalists, scientists, and so on. (Drunk History also, like Hamilton and Hark! A Vagrant, marries unapologetic moralizing and sentimentality with a self-critical lens, as I talked about in an essay a few years ago.)

People who like Drunk History may also enjoy the history chunks of John Finnemore's Souvenir Programme, a BBC Radio 4 sketch comedy show (here's a sketch with Emmeline Pankhurst) which often revisits well-known fables, historical incidents, thought experiments, and so on.
posted by brainwane at 5:12 AM on February 22, 2018 [2 favorites]

I also also loved the inclusion of all of the disabled actors in Judy Heumann/Section 504 sit-in story. 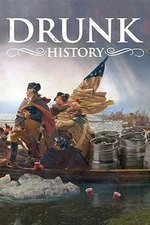