The story of a young man's adventures in the Californian pornography industry of the late 1970s and early 1980s.


Roger Ebert: In examining the business of catering to lust, "Boogie Nights'' demystifies its sex (that's probably one reason it avoided the NC-17 rating). Mainstream movies use sex like porno films do, to turn us on. "Boogie Nights'' abandons the illusion that characters are enjoying sex; in a sense, it's about manufacturing a consumer product. By the time the final shot arrives and we see what made the Colonel stare, there is no longer any shred of illusion that it is anything more than a commodity. And in Dirk Diggler's most anguished scene, as he shouts at Jack Horner, "I'm ready to shoot my scene RIGHT NOW!'' we learn that those who live by the sword can also die by it.

The film's unofficial family group is immersed in exploitation movies, which becomes the same collective eccentricity that country music was for ''Nashville.'' Mr. Anderson, who begins his film spectacularly with a version of the great Copacabana shot from ''Goodfellas,'' has no qualms about borrowing from the best.

Rolling Stone: These are characters trying to forge a family out of whatever crude materials may be available. Sex is mostly confined to the cameras - why waste a good come shot? It's the personal bonds these fringe dwellers form that count, until Eddie, fueled by drugs and arrogance, spirals out of control. Lashing out at Jack, who tries to give him a sense of belonging, however mired in smut, Eddie shouts, "You're not the king of me." Even when Boogie Nights flies off course as it tracks its bizarrely idealistic characters into the '80s - when money replaced sex as the aphrodisiac, and crass video replaced film as the medium for porn - you can sense the passionate commitment at the core of this hilarious and harrowing spectacle. For this, credit Paul Thomas Anderson, 27, the film's writer and director, who strives to give his second film, after the small-scale Hard Eight, the epic sweep of a Nashville or a GoodFellas. Anderson scores a personal triumph by finding glints of rude life in the ashes that remained after Watergate. For all the unbridled sex, what is significant, timely and, finally, hopeful about Boogie Nights is the way Anderson proves that a movie can be mercilessly honest and mercifully humane at the same time.

Senses of Cinema: Anderson follows these characters and tries to provide some kind of resolution, even if it is death. However, the film’s central relationship involves Eddie and his surrogate father, Jack Horner. The casting of sixty-one year old Burt Reynolds as Horner, who had been in television and movies since 1958 as an actor and director, and a major star in 1970s, gives the film a real edge. His scenes with Wahlberg, the up and coming star meeting the star on his way down, are fascinating. Horner is initially interested in Eddie because of his commercial potential: “a feeling that beneath those jeans is something wonderful just waiting to get out.” Their inevitable break-up becomes the film’s strongest, most revealing, scene as their fictional characterizations mesh with their off-screen status. It is not hard to understand why Anderson wanted Reynolds for this role. His career epitomizes the narrative trajectory of the film as optimism and innocence give way to compromise and violence. This culminates with the Candid Camera spoof with Horner searching the streets of Los Angeles for cheap sex material. Horner’s fall mirrors Reynolds’s career. A more than decade long period at the top was followed by a long period down, beginning in the early 1980s.

On the other hand, Sniff 'n the Tears' "Driver's Seat" is one of the most perfect rock placements in movies ever. "Sister Christian" is used iconically, but it could have been any of a number of songs and been just as effective. "Driver's Seat" sets a mood, and as I watch the clip, that mood is ominous.

This movie was seismic, an instant part of my circle's fabric. Coming out in the wind-down of the great 90s indie explosion, this movie's production values are just off the charts. I wonder what it was like in Scorsese's head when he saw this.

I can't hear Jesse's Girl without also hearing Rahad's ad-libs: "I'm so jealous! She should be wi' ME!"

Fun Fact: Mr. Guns & Ammo in the donut shop is played by Allan Graf, aka Hearst's Captain who tussles with Dan in Deadwood.
posted by Alvy Ampersand at 2:31 AM on February 24, 2018 [1 favorite]

Even after all these years--and countless viewing of this move, which is one of my favorites--I still find the tension in the Sister Christian segment to be excruciating.
posted by carmicha at 7:56 AM on February 24, 2018 [9 favorites]

I saw this movie around the time it came out, and it was how I learned who Philip Seymour Hoffman was. He broke my heart. I knew he was going to be amazing.
posted by Countess Elena at 12:15 PM on February 24, 2018 [6 favorites]

Julianne Moore puts on an absolute acting clinic in this role.

That and anyone who has worked in film/video will recognize the crew boredom. Ricky Jay is terrific.
posted by Sphinx at 1:40 PM on February 24, 2018 [2 favorites]

Reading that "Why I Fell Out of Love" piece is sorta:

1) Jarring, because in no way did I relate to Dirk; at best he's a goodhearted lunk, but really, he's a dumb piece of meat who was lucky enough to find a place where a dumb piece of meat could achieve something (Wahlberg's best performance/least of a stretch for him?). I do relate to Plainview, I just don't have his work ethic. And general murderousness.

2) Funny, because it reminds me of Peter Griffin not liking The Godfather because "It insists upon itself".
posted by Alvy Ampersand at 1:07 AM on February 25, 2018 [2 favorites]

Julianne Moore is just amazing in this film.

Tx for getting me to see Boogie Nights again.
I hadn't seen it since it came out originally. So what I remembered was rather simplistic.
All in all it's still a really entertaining movie. Amazing for a 27 yr old director really.

The 'Sister Christian' scene near the ending kicks the movie into a different gear when it's 'they all go down in flames' trajectory is getting a bit predictive. And the tension is built up really well.
posted by jouke at 9:15 AM on February 25, 2018

i just watched this for the first time after seeing it posted here - incredible acting and so bleak - i wish i could figure out how to wash the taste of this movie from my thoughts
posted by kokaku at 7:20 PM on February 25, 2018 [1 favorite]

I saw Boogie Nights in a packed house in Boston. I was 20 years old, at the very beginning of my journey of figuring out how to be an out and proud gay man in a big(ger) city. My most enduring memory of this night is the not-inconsiderable number of people who laughed out loud during the gay-bashing scene in the parking lot. (I think I later saw a free preview of Requiem for a Dream in the same theater, so that's two traumas for the price of one.)
posted by mykescipark at 12:59 PM on February 27, 2018

Just rewatched this for the first time in a long time, and it's still remarkable how tight and assured this is, even with the obvious Altman influences. (Not that Altman isn't tight, but someone trying to imitate his style could easily come up with a loose, shambling mess.) Everything is perfectly on point for its era, and if there's one minor complaint, it's that, especially as revealed in "The Devil and John Holmes", that milieu was probably even sleazier than the version shown in the movie. I mean, I'm not saying that I'd really want to see any of that. (There's a movie adaptation, Wonderland, that, although it's got an impressive cast, isn't well-rated.) I suspect that PTA may have deliberately pulled back from showing how sleazy the scene really was to avoid having people lose any empathy for Dirk; at one point, he even mentions "Johnny Wadd" (Holmes' onscreen persona) as someone that he doesn't want to be like.
posted by Halloween Jack at 7:04 AM on October 19, 2020 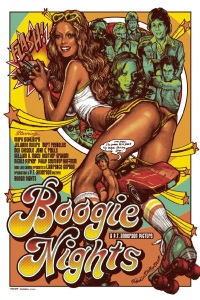