Cady Heron is a hit with The Plastics, the A-list girl clique at her new school, until she makes the mistake of falling for Aaron Samuels, the ex-boyfriend of alpha Plastic Regina George.


NYTimes: Though narrative cohesion isn't the strength of ''Mean Girls,'' which works better from scene to scene than as a whole, the intelligence shines in its understanding of contradictions, keeping a comic distance from the emotional investment of teenagers that defined ''Ridgemont High'' and later the adolescent angst movies of John Hughes. (Like Mr. Hughes's writing, Ms. Fey's combines comic practicality and a fascination with the cruelty born of suburban privilege.)

Slant: Fey is genuinely concerned with identity politics and she understands the caste system that exists in most high schools and how they are formed. She may be bitter, but that bitterness never clouds her good judgment; however funny the spectacle of an unsupervised tween dancing to Kelis’s “Milkshake” or lifting her top to a “Girls Gone Wild” video may be, even the worst parent in the world should be able to recognize how disturbing this running gag is beneath its absurdist surface. During the film’s outstanding opening sequence, Fey carefully lays out the topography of Cady’s new high school, likening the process with which she chooses a table in the lunchroom to an animal picking a feeding ground. Mean Girls is positively Darwinian. As such, it’s only natural that when Cady cozies up to the titular “Plastics” and discovers their carnivorous behavior, it’s all about the survival of the fittest. Fey uses Cady’s transformation from new kid on the block to shallow Plastic to illuminate the ways vengeance can make a victim into a so-called mean girl. But perhaps some of that high school insecurity is still eating away at Fey, who has a tendency to undervalue her own intelligence and oversell her audience. The film’s final moments are unfortunately lazy, and the non-stop hit-or-miss gags have a way of distracting from the vicious Cady-versus-Plastics death match; it also doesn’t help that Fey calls too much attention to her animal kingdom metaphor.

Why Mean Girls is a Classic

Why the Limit to Mean Girls Does Not Exist

Why is Mean Girls so Quotable?
posted by MoonOrb (14 comments total) 4 users marked this as a favorite
The actual screenplay for this is very quote to what ended up on screen and actually hilarious. The short character and scene deceptions completely represent the tone the movie ends up with.
posted by The Whelk at 8:53 PM on March 5, 2018

I have said this before on this site, but:

And on the third day God created the Remington Bolt Action Rifle so that man could shoot the dinosaurs, and the homosexuals.

This is when I realized that this was not the movie I was expecting, and I was going to enjoy this way more than I expected.
posted by chainsofreedom at 5:20 AM on March 6, 2018

Mean Girls so accurately nailed what it's like to be in high school that the first time I saw it I was a little dumbstruck.
posted by dry white toast at 12:14 PM on March 6, 2018

I feel that the write-ups linked above do not give nearly enough credit to the comic timing of both Lizzy Caplan and Daniel Franzese. Casting was so important to the success of this movie, and they are two of the best-cast characters in the whole show. Most of my favourite moments are anchored by those two. Case in point:

Another bit I liked. I watched this with my then-boyfriend, who was a physics major:

Cady, to Aaron: Hey, I'm totally lost. Can you help me?
Cady VO: But I wasn't lost.
Aaron: Yeah. It's a factorial, so you multiply each one by N.

At this point, Ex-Freedom snorted and said, "That's wrong."

Oh man, he laughed so hard. I dunno, I guess it's always fun when movies don't fake the math or science.
posted by chainsofreedom at 3:05 PM on March 6, 2018 [2 favorites]

This movie is so freaking good. Tina Fey's writing is so sharp and funny and incisive, but she hadn't yet developed the mean streak that has reared its head in the later years of 30 Rock and in Kimmy Schmidt (which I do love). All the actors are so good and fresh and funny. It's a bit sad to see what's become of them - not just the Lindsey Lohan gossip-trainwreck, but I feel like so many of them were really talented young comedic actors who have not gotten the chance to really fulfill their potential.

Really? I think Lizzie Kaplan, Rachel McAdams, and Amanda Seyfriend are doing fine. Lacy Chabert was never really allowed to grow out of being a child after Party of Five.
posted by fluttering hellfire at 7:42 PM on March 7, 2018 [1 favorite]

Rachel McAdams has worked plenty, in romance Notebook-style fluff, in action films (a great Irene Adler in the RDJ Sherlock Holmes and the romantic lead in Dr. Strange), and in prestige TV (True Detective).
posted by praemunire at 8:48 AM on March 8, 2018

Rachel McAdams seems to be doing great. Lizzy Caplan and Amanda Seyfried seem to have worked plenty but, I don't know, they seem to have both fallen a bit prey to the problem of Hollywood not really knowing what to do with funny, Hollywood-beautiful women who weren't on SNL (lately this seems to be getting better, overall, yay). Amanda Seyfried definitely spent a few years getting tracked into terrible ingenue roles, when she really has more of an edge than that.
posted by lunasol at 10:04 AM on March 8, 2018

Lizzy Caplan and Rachel McAdams really make this movie for me. Lindsay Lohan is fine, but as much as the script tries to make up for it with backstory she's really written as a blank-slate-type protagonist. Lizzy Caplan's character especially manages to sidestep the eyerollingly false cheesiness that usually befalls characters that are positioned as edgy outcasts, and I think that comes down at least as much to her acting as the script.
posted by invitapriore at 6:06 PM on March 8, 2018

Many/most of the teen male elads from this movie have since come out as gay.
posted by DirtyOldTown at 7:13 AM on November 12, 2021 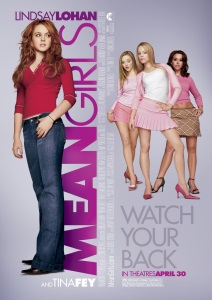