While Jessica debates her next move, Malcolm confronts Trish about her erratic behavior, and Jeri makes contact with a healer.


*AV Club - Eight episodes in, Jessica Jones’ second season finally feels like it’s getting somewhere
*Den of Geek - Jessica Jones keeps up the pace as Jessica squares off with the killer and Malcolm makes a tough choice.

*Jessica awakes chained to the bed, and Karl tries to convince her to give her mom and him a chance. When Trish calls, Jessica convinces Karl she needs to answer, then tells Trish that the lead was a dead end, that Karl has left with no trace and she's calling off the IGH investigation. When Jessica convinces him that she'll talk to her mom if he unchains her, she shoves him out of the room and texts the "Killer" address to Det. Costa. Alisa forces her way back in and tells Karl to lock the door behind her and run to their rendezvous point.

*In their morning-after, Malcolm confronts Trish about her being on drugs. She finally admits that the inhaler is not allergy medication, but insists that it's not addictive and denies that there's anything wrong.

*Hogarth tells Inez that she grew up poor and living in a trailer. Hogarth goes to the prison where Shane, the healer, has been held for 15 months awaiting trial, offering her services in exchange for his. He feels her hand, senses that her ALS started with hand cramps, then recoils when he feels the extent of her sickness, telling her to go away and that he can't do this again. Back home, Hogarth asks Inez to join her in a celebratory champagne, saying she convinced the DA to drop the charges against Shane to misdemeanors for time served, and then Hogarth kisses her scarred thighs (and onward).

*Alisa tries to connect with Jessica, talking about their family vacations at Playland and how only the two of them loved the ferris wheel. She also tells her that the marriage was already on the rocks long before the car crash. Jessica realizes Alisa must have another way out of the basement besides the locked door if she was able to go out and kill people without Karl knowing, locates the tunnel behind the bookcase, and decides they should flee. Costa arrives to an empty house.

*With the IGH case apparently closed, Malcolm gets to work on Hogarth's, and finds that Benowitz' secret is that he's closeted and frequents a gay bar called Whiskers. Malcolm pretends that he was sent by Chao to blackmail Benowitz but is having a crisis of conscience. He asks Benowitz to let him help him get dirt on Chao instead, but Benowitz says he doesn't need help and already has all the dirt on Chao's illegal offshore holdings. When Benowitz leaves, Malcolm gets attacked by 3 homophobes, but then hopped-up Trish joins the fray and scares them off. She convinces an injured Malcolm that using the inhaler will help him heal faster, and he takes a hit but realizes he's made a huge mistake as the drug courses through his system.

*Jessica and Alisa take a cab back to the city, but Jessica makes the cabbie pull over and let them out before his texting-while-driving and casual misogyny drives Alisa into rage-monster mode. Back at the office Alisa admires Jessica's portrait. When Costa arrives to ask Jessica for more info about her intel on Karl's place, she leads him down the hall and promises to come to the station tomorrow. She goes back in to find that Alisa has escaped out the window, runs down to the street looking for her to no avail, only to find her chatting with Oscar in the hallway, having introduced herself to him as Jessica's mom. Later, someone starts shooting into the apartment, wounding Jessica, and Alisa runs out to locate the shooter.
posted by oh yeah! (7 comments total) 3 users marked this as a favorite
So, Benowitz' excessive "chocolate" expenses were cover for payment towards his gay sex with black men. Oy.

Trish really is the world's worst friend this season. Poor Malcolm. I mean, on some level he had to know that her "it's not addictive" sell was bullshit, but still. I'm surprised she's willing to share the inhaler at all, considering she has no idea how many doses are left in it and no way of getting a refill what with Simpson and Kozlov being dead -- I guess it could be read as her rationalizing the addiction by refusing to acknowledge that it is an addiction, but, it's going to be one hell of a withdrawal.

I am usually the first handwave away gaffes in continuity and geography and such in fiction on screen...

The Netflix Marvel shows are testing my resolve. When Jessica and Alisa bail out of the cab prematurely in Brooklyn, we get a glorious background shot of the Empire State Building and the MetLife (neé Pan Am) building. Notwithstanding that we should be able to spot Stark Avengers Tower there, in the big screen outings in the ostensible shared universe, we have seen the MetLife building being taken down. Then again, in the opening of one episode of The Punisher, we saw this montage of Frank sitting around some fires with the homeless on the edge of the East River while the sun comes up over the Manhattan skyline behind them.

Either the sun rises in the west in the MCU, or there is something deeply peculiar about Brooklyn on Earth-19999.
posted by ricochet biscuit at 7:43 PM on March 16, 2018 [2 favorites]

Drugs are bad, y'all. And Junkies are Tedious.

Although I gotta admit that scene with Trish tempting Malcolm to take the inhaler and then his reaction was one of the most tense and horrible moments this season.
posted by straight at 9:56 PM on March 16, 2018 [3 favorites]

I thoroughly supported Alisa's request that the driver put down the phone, and can only assume the show is again demonstrating how horrible Jess can be. "It's what people do." If only Alisa could've put a fist through the engine after exiting the cab without getting hauled off to Super Prison.
posted by asperity at 10:09 PM on March 26, 2018 [1 favorite]

Notwithstanding that we should be able to spot Stark Avengers Tower there, in the big screen outings in the ostensible shared universe, we have seen the MetLife building being taken down.

I doubt that the TV series has the budget to alter the skyline too much.
posted by octothorpe at 7:33 PM on April 6, 2018

So is this the origin story of Trish turning into Hellcat?
posted by octothorpe at 7:37 PM on April 6, 2018 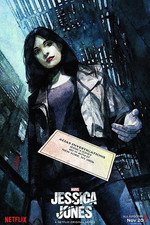