Lenny returns and everyone wants to know why... and how.


AV Club - Legion interrogates Lenny and reveals an unexpexted body amid the puzzles.

Vulture - The Unholy Resurrection of Lenny Busker
posted by runcibleshaw (28 comments total) 1 user marked this as a favorite
My first FanFare post, so let me know if I did a wrong thing.

1. I haven't been tracking the "chapter" numbers but this one was called "Chapter 6", yes? Is that numbering consistent with previous episodes?

2. I've not read all of the comments for all the season 2 episodes, but is anyone else convinced that we never left David's mind?
posted by runcibleshaw at 9:13 AM on May 2, 2018

S2E1: Chapter Three: Delusions
S2E2: Chapter 4: Umwelt
S2E3: This episode started with a chapter about conversion disorder, but didn't have a title page.
S2E4: There was no chapter.
S2E5: Chapter Six: CONSPIRACY

Thanks. I thought about calling this episode Chapter 6 in the title, but that didn't follow the convention of the previous posts for this season.
posted by runcibleshaw at 12:03 PM on May 2, 2018

More than ever, this whole episode is dream logic.

I think I will be disappointed no matter what the answer is to what's going on. If it's "reality", what kind of trippy reality has giant floating green hands pointing in different directions? If it's not reality, if it's all in David's mind, that's kind of too obvious. The only reason I lean toward the latter being true is that Legion, the character in the comics, is someone who has the comic book version of multiple personalities, with each one having a different power.

So far in the show, although David has manifested multiple powers (teleportation, telepathy, telekineses, pyrokinesis, etc.) those powers aren't associated with alternate personalities (for the most part). Add to that the fact that all of the characters with powers in the show (besides the Shadow King [and the unnamed Prof. X]) are not characters from the comics. To me that says that everyone we see with a power, Syd, Ptonomy, Kerry/Cary, etc., are really David's own alternate personalities. That means that most of the show must take place within David's mind. Not sure about the apparently unpowered people like Melanie or Claude though.

It also explains things like the anachronistic technology and aesthetics, or the fact that the main characters never seem to leave their tower-block/fortress/skyscraper. The tower is David's mind, a bulwark against the Shadow King's intrusions, as opposed to Summerland, which was a more open and inviting place. The "sphere" was just him retreating further into his mind, going from Summerland to the Tower, while the Shadow King searched for him.

Anyway, I guess I had a lot to say about the show.

PS At one point in season 1 Lenny (Aubrey Plaza) in David's memory turns into a unknown man, who I don't think has been shown since. Also, I don't think it's a coincidence (conspiracy) that Melanie has a drug animal just like in that scene.
posted by runcibleshaw at 2:33 PM on May 2, 2018 [1 favorite]

I've not read all of the comments for all the season 2 episodes, but is anyone else convinced that we never left David's mind?

I've been wondering the same thing, although I'm not completely convinced of it - and if we are in David's mind, I'm hoping it's less like "David is lying unconscious on a couch someplace" and more like "David's experience of reality is out of whack" with a possible side of "and he is able to make that out-of-whack-ness physically manifest without realizing it."
posted by showbiz_liz at 2:40 PM on May 2, 2018 [1 favorite]

I never read the original New Mutants, so I'm basing this on the Wikipedia entry, but surely the point of David's personalities is that they are all real and distinct, as real and distinct as Charles Xavier or Jean Grey, anyway, but just that they exist inside his consciousness. So if it did turn out that all of this is happening inside his mind it's no less dramatic - his consciousness exists as a pocket universe within the X universe.
posted by Grangousier at 3:46 PM on May 2, 2018

Yeah, it's hard to tease apart what's an affectation on the part of the writers/showrunner, and what's meant to be an obvious nod to the unreality of the situation. For instance, the fact that many of the original characters are named after famous figures, like Syd Barret and Claude DeBussy.
posted by runcibleshaw at 4:35 PM on May 2, 2018

I'm only just watching this episode now, and wow that shot of Clark walking into the interrogation room is stunning. I feel like I could pitch the whole show to somebody by showing them those few srconds.
posted by showbiz_liz at 5:05 PM on May 2, 2018 [1 favorite]

Poe had a thing for his lost Lenore.

Well, the episode does start with "Previously Apparently on Legion"
posted by fullerine at 9:40 PM on May 2, 2018 [14 favorites]

Man, that all just seemed really drawn out for how pointlessly cruel it was. Feels like the episode could've gone 5 minutes less without all the plodding slow-mo.

David was already ready to go along whatever nonsense the Shadow King is pulling thanks to future-syd, it's unclear at this point what the sister-stealing Lenny resurrection achieved other than making David sadder. If it was just for the Shadow King to infiltrate Division Three, it doesn't seem like he's had any trouble with that so far.

I'm rooting for this season to end well, but so far it seems like an awful lot of people getting fucked over and stuck with Jon Hamm delusions and for what? I guess we're going to endure a couple more episodes worth of suffering and then Oliver is going to enact his secret plan, likely still with tragic consequences.

This is likely a goof: As Clark leaves the scary upside-down room, and Lenny begs to leave, the stenciled words on the wall are mirrored left-right instead of upside-down.
posted by Pronoiac at 11:02 PM on May 2, 2018

ah yeah that's weird. also, i think it's a horizontally mirrored image of the upside down words, probably because they were messing around in post
posted by numaner at 11:39 PM on May 2, 2018

so it sounds like Amy was dreaming of Admiral Fukyama and the Vermillion, which Ptonomy saw when he went into Lenny's head, but I didn't recognize the song he was singing.

and is that a different actor playing Ben? I don't remember him being that skinny.
posted by numaner at 11:41 PM on May 2, 2018

Ah! Yes, it's mirrored and upside-down. My roommate pointed out the upside-down, but I was focused on the text instead of the camera.
posted by Pronoiac at 1:03 AM on May 3, 2018

Hey guys? We still have no answer for wtf was up with the cow. Of all the weird shit currently happening on this show, that damned cow is somehow a sticking point for me. Its presence is so utterly bonkers that it absolutely must mean something, but so much is going on that we've all kinda forgotten about it.

For me, that cow is the canary in the coalmine telling us not to take anything at face value - to question everything we're being shown.
posted by showbiz_liz at 11:00 AM on May 3, 2018 [1 favorite]

i'm just gonna assume the cow is a device that Division 3 uses to keep people calm during emergencies
posted by numaner at 11:16 AM on May 3, 2018 [1 favorite]

Also, apparently the TK powers came from the Shadow King and that's why David didn't have them when he needed to move Melanie to the lab? That's my reading based on Amy being levitated onto the table.

And, of course, we still don't know how much of this is all in David's head and how much of it is real, but I'm going with it's all really happening until they reveal otherwise and I sure hope that, if that's the path they're taking, it's done better than 'and then he woke up.'
posted by kokaku at 1:19 PM on May 3, 2018

david teleported the monk and himself onto the roof in the same episode where they dragged melanie to carrie’s lab. he also (presumably) teleported into the interrogation room this episode, which is why lenny is surprised to see him when she looks up (and possibly why there was no one there to open the door for him at the end). i don’t think david puts much thought into the what he’s capable of and currently uses his powers mostly on instinct. i took that as a character detail, not a plot point.
posted by JimBennett at 2:38 PM on May 3, 2018 [1 favorite]

I definitely didn't recognize the actor playing Amy, so I watched most of that scene as effectively eerie sidetrack into the misfortune of a random new couple we were about to watch get horribly murdered, for some reason. (I even thought of Amy when David first recoiled from Lenny and asked whose body she was in, I just got super thrown off by her hair or something, and thought she maybe really was the same actor who plays Vermilion.)

Isn't pyrokinesis something he gets from someone else in season 1? I can't remember the exact sequence, but in the pool scene he doesn't seem to be aware of what he's doing but someone else (Syd?) is. If pyrokinesis, and telekinesis are out, then teleportation is easily explained by him being inside his own mind and being able to "travel" wherever he can think of.
posted by runcibleshaw at 5:40 PM on May 3, 2018

I definitely didn't recognize the actor playing Amy, so I watched most of that scene as effectively eerie sidetrack into the misfortune of a random new couple we were about to watch get horribly murdered, for some reason. (I even thought of Amy when David first recoiled from Lenny and asked whose body she was in, I just got super thrown off by her hair or something, and thought she maybe really was the same actor who plays Vermilion.)

Exactly the same here. Amy was the first person I thought of too- but I didn't recognize her when we saw her. So the combination was kind of a weird watching experience.

Why would Amy be dreaming of Vermilion, anyway? My thought was that I guess they're a distributed consciousness, so maybe she ended up with a part of them? Especially as she said her "dream" was during the day and (pretty clearly) not actually asleep. Something's hinky with all that.
posted by BungaDunga at 10:47 AM on May 6, 2018

But all in all my main problem with this season is that it doesn't have the urgency and focus the first season did. Even when the first season seemed to be taking stylistic left turns and so forth it always seemed very sure of itself and driving towards something.

This season doesn't seem to know what it's driving towards, which is on the one hand disorienting, which is sort of a piece with the intentional decisions that it makes, but on the other hand might just be standard second-season "what are we doing" problems.
posted by BungaDunga at 10:50 AM on May 6, 2018 [4 favorites] 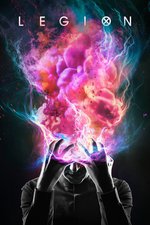