Carrie White, a shy, friendless teenage girl who is sheltered by her domineering, religious mother, unleashes her telekinetic powers after being humiliated by her classmates at her senior prom.


NYTimes: “Carrie” is billed as a horror movie. But is sometimes funny in a puzzling kind of way, it is generally overwrought in an irritating kind of way, and once in a while it is inappropriately touching. It isn't frightening at all until the very end, and then it is briefly and extremely frightening.

Roger Ebert: Well, what makes the movie's last twenty minutes so riveting is that they grow so relentlessly, so inevitably, out of what's gone before. This isn't a science-fiction movie with a tacked-on crisis, but the study of a character we know and understand. When she fully uses (or is used by) her strange power, we know why. This sort of narrative development hasn't exactly been De Palma's strong point, but here he exhibits a gift for painting personalities; we didn't know De Palma, ordinarily so flashy on the surface, could go so deep. Part of his success is a result of the very good performances by Sissy Spacek, as Carrie, and by Piper Laurie, as Carrie's mother. They form a closed-off, claustrophobic household, the mother has translated her own psychotic fear of sexuality into a twisted personal religion.

Slant: Carrie, a profoundly sad horror comedy about a dumped-on, telekinetic outcast whose late-blooming menstrual cycle and sexual maturation react violently with her fundamentalist mother’s psychological chastity belt, is the film in which De Palma discovered that his destructive sense of humor could be synthesized with his graceful visual sensibilities in a manner that would accentuate both. The linearity of King’s storyline (actually, the linearity of screenwriter Lawrence D. Cohen’s version of the novel, which was told via a fussy collage of news articles, testimony, and Reader’s Digest memoirs) has the preordained momentum of Greek mythology; some of the shots of a blood-soaked Carrie standing above her peers at the fateful prom were lifted from the theatrical performance De Palma shot of Dionysus in ‘69.

De Palma’s technique, however, reaches a new volatility here. Half Phantom of the Paradise, half Obsession, Carrie is hysterical in every sense of the word. Laurie has said that she took the film to be a satire, claiming it was difficult for her to perform Margaret White’s perverse death—being pinned to a doorway by flying knives until she resembles the Christ-as-pincushion shrine Margaret keeps in Carrie’s punishment closet—without busting out in laughter. She later admitted to being disappointed that the film wasn’t inherently a comedy, not realizing it was. Maybe the humor isn’t always as broad as Mrs. White heaving and moaning in ecstasy as Carrie gives her the vaguely homo-incestuous gift of martyrdom, but it’s always there, and usually bittersweet.

AV Club: Meanwhile, Sissy Spacek as Carrie is the kind of controlled performance Oscar voters love, not least because of her intense method of getting into character. As Spacek wrote in her 2012 memoir, she deliberately isolated herself from the rest of the cast on set, instead holing up in her dressing room and studying religious etchings. She would then copy their body language, incorporating the tortured postures of martyrs and demons into her performance. At the beginning of the film, Spacek’s body language is very closed off, her head down, shoulders slumped, and hands folded as if she’s trying to take up as little space as possible. When she does speak, she either murmurs or shrieks in terror. As the film goes on and Carrie begins to develop her powers, Spacek starts to slowly unfold, putting her head up and shoulders back as she tries on that fateful pink prom dress and lipstick. But her confidence has a tragic edge to it, thanks to her utter naïveté; she’s so easily duped that we feel sorry for her as she clings to her prom date, Tommy (William Katt), for dear life.

That all changes, of course, in the film’s famous climactic sequence—if you don’t know what happens at the end of Carrie, we won’t spoil it for you here—when suddenly, a shy girl who was shaking like a frightened rabbit just a few minutes ago transforms into a hissing cat with its back arched and its claws out. Spacek removes all softness from her performance in these final scenes, bulging her eyes out and standing stiffly with her shoulders thrown back, muscles clenched tight, and limbs thrown out in unnatural, angular postures. Blood may be a bit on the nose as far as coming-of-age symbolism goes, but Sissy Spacek’s total physical transformation gives the story an elemental quality. Her version of Carrie White can’t control her body, any more than she can control the way her mother or the kids at school treat her. Her committed, sympathetic performance lifts the movie above your typical horror fare, and the Academy was right to take notice.

Four decades later, Brian De Palma’s ‘Carrie’ stands out as one of the most capably crafted horror films of all time

How Carrie Left Her Mark on Horror
posted by MoonOrb (5 comments total) 3 users marked this as a favorite
Laurie and Spacek played sisters in The Grass Harp 19 years later.
posted by brujita at 9:03 PM on May 4, 2018

The I Was There Too with Matt Gourley podcast episode with Piper Laurie was excellent.
posted by elsietheeel at 7:10 AM on May 5, 2018

The Gilbert Gottfried Podcast had Nancy Allen this week and they talked a lot about this movie, so I figured it's a good time to tackle it!

I remember Carrie being a part of that 70s ESP trend, and also as a "really scary" movie, the kind of scary that inspired the legend of the "Exorcist barf bag" (holy shit it's real!). I had seen Jaws in the theater, but this was "adult scary" I guess, and so even though Carrie permeated my early years I'd never wound up seeing it, one of those movies that always missed the cut at the video store.

As it turns out, it's one of those movies that really kind of rolls along right from the beginning. I don't know if it's because De Palma was by-the-book and following all the rules of a three-act structure, or because of its influence on other movies making it seem like it would be a lot denser and longer-feeling than it is, but it really just zooms along. It's also a lot weirder than I thought it was going to be. I thought the telekinesis would only show up at the end and that it was kind of out of control, but I can really see the allegory of menstruation and her figuring it out and starting to use her powers to increase her agency. Or something, but I just didn't think she'd be "aiming" so much. I love it when a significant movie I haven't seen turns out to be more interesting than I thought it would be. Casablanca -- which I only ever saw in parts growing up -- was similar for me: "Ohhhhh, what people talk about when they talk about this movie is: all the parts, the whole thing."

This movie also functions as a case study in "Situations that were considered acceptable for slapping women in the face in 1976 that are clearly horrifying today."

John Travolta's southern accent is just this side of a hate crime.
posted by DirtyOldTown at 5:07 AM on February 9 [1 favorite] 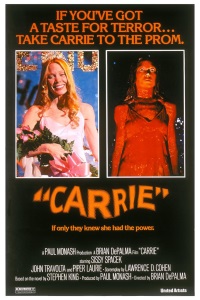