The early life of Woody Guthrie as a vagabond folk singer.


Roger Ebert: There are images in Hal Ashby's “Bound For Glory” so striking or so beautiful I doubt I'll ever forget them; this is the most visually accomplished film since “Barry Lyndon”. But the beauty is sometimes achieved at the cost of tone. Scene after scene unfolds at such a measured pace, with such calculation and understatement, that finally we seem to be watching a travelogue set during the Depression. The film has a grave dignity, which is good, but it often seems to lack life, which would be better.

Empire: With Haskell Wexler's splendid photography and Leonard Rosenman's fine score (both of which won Oscars), the film provides a poetic yet authentic view of Depression-era America with the symbolic figure of Guthrie (an impressive David Carradine) at its very centre.

Cinephilia and Beyond: Ashby’s fifth feature film is an unorthodox biopic displaying great storytelling and slightly different approach to its protagonist. Guthrie was a complex personality, and Ashby and Getchell deal with his subject more objectively than expected, as they portray the musician as the imperfect human being he naturally was. But even more than for the way it treats its theme, Bound for Glory stands out among its competition thanks to Wexler’s stunning photography. The visual aspect of the film is without a doubt its strongest component, with numerous breathtaking images engraved in our memory. This is actually the first film to make use of Garrett Brown’s new Steadicam invention, a technique not used simply as a ploy or gimmick, but a powerful tool moderately employed to maximum effect.

The Visual Power of "Bound For Glory" 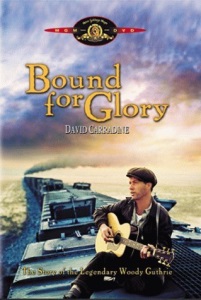