Cool black private eye John Shaft is hired by a crime lord to find and retrieve his kidnapped daughter.


Roger Ebert: The strength of Parks's movie is his willingness to let his hero fully inhabit the private-eye genre, with all of its obligatory violence, blood, obscenity, and plot gimmicks. The weakness of "Shaft," I suspect, is that Parks is not very eager to inhabit that world along with his hero.

Gordon Parks was the first black director to make a major studio film, and his "The Learning Tree" (1969) was a deeply felt, lyrically beautiful film that was, maybe, just too simple and honest to be commercial. It didn't find a large audience, and I suspect that Parks turned next to "Shaft" for commercial survival.

The nice thing about "Shaft" is that it savors the private-eye genre, and takes special delight in wringing new twists out of the traditional relationship between the private eye and the boys down at homicide.

NYTimes: In the case of “Shaft,” the vitality is so freshly vulgar, so without solemnity except for its observance of private eye conventions (which are not exactly solemn to start with), that the movie becomes the kind of entertainment to which any audience — black, white or you‐name‐it — can respond. I suppose it's the same sort of vitality that kept black audiences responding to white, assembly‐line movies during all of those decades past when to be black was not so beautiful, just invisible.

BBC: The film was hammered at the time for not being a full exposé of the black urban experience, and for being just a black version of a 40s Hollywood gumshoe thriller, yet "Shaft" certainly has a black sensibility (witness one particular chat between Shaft and the Italian-American cop) and, even now, it seems radical to have a movie in which almost all the actors are black. However, the film's violence, to which many objected at the time, will not cause much shock-horror in today's audiences. The attraction to them will be the stylish conversation and attitudes, as well as Richard Roundtree, who lends Shaft the right amount of charisma, swagger and untouchability. Even as the film opens, Shaft strolls through moving traffic, completely unscathed.

Black Pen/White Cup: Shaft (1971), and the Birth of Blaxploitation

With Shaft, Isaac Hayes fomented a soundtrack revolution
posted by MoonOrb (7 comments total) 3 users marked this as a favorite
I can dig it.
posted by Chrysostom at 7:09 PM on May 17, 2018 [6 favorites]

Years ago I saw a special exhibit on Gordon Parks' work at the Detroit Institute of Arts. If you ever get a chance to see an exhibition of his photography I recommend you go -- the man was a mutiply-talented artist.
posted by Nerd of the North at 2:28 AM on May 18, 2018 [2 favorites]

Author Ernest Tidyman really conceived of Shaft as a classic PI, but black, and so the film has a lot of the conventions of a PI movie. It's a pretty distinct movie, coupling Tidyman's true crime sensibility (he later wrote the screenplay for French Connection) with Parks' talent for representing the Black experience.

I like that a lot of the movie takes place in the Village — Shaft actually lives as 55 Jane Street, about seven blocks north of Stonewall. And he's comfortably a resident of the Village — at one point he ducks into a bar, where he is obviously friends with Rollie, the gay bartender. Parks knew the village as well — the bar, No Name Bar, actually was about across the street from Shaft's apartment.

Haven't watched it in a while, but I used to watch it and Superfly all the time, the latter directed by Gordon Parks, Jr. and a sort of parallel universe Shaft, telling of a criminal rather than a PI and set in Harlem rather than the Village, with a hero who is flashy with his money and peacockish with his clothes sensibility, while Shaft favored a more subdued version of cool. I like both films about equally, and both feature superb soundtracks, but even though Shaft is considered to be the father of the genre, Superfly is a lot more consistent with the sensibilities of a majority of Blaxploitation.

The remake of Shaft was heavily rewritten by Richard Price, and even though it was cowritten and directed by John Singleton, I recall Samuel L. Jackson complaining that the film's dialogue was a white guy's idea of how black people speak. There is a moment in it I like though, when Jackson confronts Dan Hedaya, who has been following him, and Hedaya says he knew where Shaft would be because of "the drum," which I assume is a reference to Putney Swope, where everybody claims to just know things because of "the drum."
posted by maxsparber at 7:21 AM on May 18, 2018 [4 favorites]

With another sequel coming out in a week and a half, I am prepared to state that Shaft is the only franchise (now five movies and a TV series) where fully two-thirds of the entries have 100% identical titles.
posted by ricochet biscuit at 12:00 PM on June 3, 2019 [1 favorite] 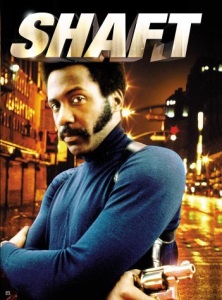