The ninth book of the series finds Jack and Stephen at ease in Malta. Jack basks in the twin glow of Tom Pullings's captaincy and the clockwork chelengk on his number one full-dress scraper. Even his once-nemesis Andrew Wray, the acting Second Secretary of the Admiralty and accused card-cheat, has done Jack a noble turn. Stephen is less at ease. Too many people seem to know the plans of the disgusting British Empire, and even more telling: the handsomest woman in Valletta is paying him particular attention – he, with his shrewish phiz, a known urinator. Something is amiss, and there's not a moment to lose, and what is more, speed is the essence of attack.


‘It is well known that I am an urinator,’ said Stephen, looking at him firmly, ‘and in recent hours I have felt a great moral pressure on me to dive.’ It was quite true: no one had openly suggested anything of the kind, and after Hairabedian’s fate no one could decently even hint at it, but he had observed many low-voiced conferences, and he had intercepted many glances directed at his diving-bell, now stowed upon the booms – glances as eloquent as those of a dog.

Aubrey Family Newsletter: Visits Diana when up for the children's teeth. Sophie has taken Charlotte and Fanny's swearing in hand and now girlish cries of 'infernal swab' and 'short-arsed cullion' are to be heard only in the remoter parts of Ashgrove wood. Jack thinks it's time for George to go to sea. Stephen imagines Sophia's response to being propositioned: "If any man so far forgot himself as to make a licentious suggestion to Sophie, she would not understand him for a week, and then she would instantly lay him dead with your double-barrelled fowling-piece."

Style Section: Very well when seen at the Opera in the Columptons' box. Stephen is getting hateful letters that say she is having an affair with Jagiello. At first Stephen thinks they letters are a code, but later he decides Diana would never be so crass as to sleep around AND write a hurried blotted most affectionate scrawl.

Babbington's Doings: Is here and there in the vile tub, the Dryad. Shares in the prize that nearly dooms Mrs. Fielding.

Pullings' Progress: Hanging around awkwardly with no command. Maturin wins him a favor from Wray in piquet. Last seen standing desolate on the quay, waving good-bye to those few friends who were not too busy to notice him. (T_T)

Mowett Musing: Now the first lieutenant. Still feuding with Rowan, heroic couplet vs. Pindaric freedom. Furious at Martin's sermon against vanity. Steals from Shakespeare but Stephen smokes it. Blushing and mute around Mrs. Fielding. Seems to do a good job but not constantly admired by Jack or described as tubular.

Edward Calamy: Along with Williamson, the two remaining midshipmen, "useless little creatures, but gay, and when they thought of it, attentive to their duty." Taking to the sea well, likes to protect Stephen. Drops his pistol which scares off the desert "fantasia".

Bonden Bulletin: Doesn't like to be seen carrying drunken Pullings or a violin case around Valletta, because where the marines might tease him. Sews Stephen a banyan.

Which It's Killick: Etches Preserved Killick HMS Surprise none so Pretty on a window with the chelengk to prove the diamonds. Distraught when it's lost in the confusion after a (no doubt arranged) camel fuck sesh on top of Aubrey's tent. Preserves the chelengk in the desert fantasia. Gets clapped onto by a monstrous three-foot bat. Catches a spy's finger with his double-action rat-trap of extra power. Has been smoking the hubble-bubble. Has the last bite of cake in his mouth when Jack asks if there's any left, so can triumphantly answer no there ain't. Sets up Diana's gold-bound article for Mrs. Fielding.

Guest Starring: Mr. Martin, who accidentally becomes a Stowaway aboard the Dromedary, and is jazzed as fuck to be going on this adventure. Possibly learns not to write his own sermons, at least not for sailors. Loves birds so much.

The unsleeping part of his mind (though very small it must have been) had told him that the wind was dropping. It had chosen an odd way of getting through the barrier of immense weariness – a dream in which he was riding a horse, a very fine horse to begin with but one that progressively dwindled and shrank until he became more and more uneasy and at last most painfully ashamed, because his feet were touching the ground on either side and people in the crowded street looked at him with indignation.

posted by fleacircus (15 comments total) 5 users marked this as a favorite
I loved that line about Sophia, it's just perfect in every way. Also I want to be friends with grown-up Charlotte and Fanny.

Are there any replicas of 'Diana's gold-bound article' or surviving similar objects from the period? I really wish I could picture it.
posted by showbiz_liz at 8:06 AM on May 22, 2018

i did a quick google search for "19th century convertible desk for field officer" and it gave me a bunch of interesting stuff that i think could be similar? but not exact.
posted by poffin boffin at 8:39 AM on May 22, 2018

searching the same but with "campaign desk" gives this magnificent beast which i think is likely the closest one to diana's
posted by poffin boffin at 8:43 AM on May 22, 2018 [5 favorites]

i'm extremely angry that i, an unwise shopper, now know that these things exist for purchase right now today
posted by poffin boffin at 8:53 AM on May 22, 2018 [5 favorites]

Also googling "gentleman's traveling case" resulted in this thing. There was a lap desk that had a secret pistol case drawer too.

I like Jack's horse dreams. Jack's been getting so depressed these last books. Getting ahead on the post-captain list should probably fill him with joy, but now it makes him feel mortal and vulnerable. He was trying to resign himself to utter failure in the last book, but then he succeeded amazingly ... now he's attaching his emotions to the Surprise's fate.

Of course there are depressing things out there too, like the horse he really falls in love with at Tina/Pelusium, he thinks this'll be the horse that Sophie loves!! But when he comes back the place is uninhabited. Pelusium it itself a ruined silted up sea port, and in modern times it's nothing. (Though there is this weird area that looks like a PUBG test map.)
posted by fleacircus at 9:19 AM on May 22, 2018 [1 favorite]

"If any man so far forgot himself as to make a licentious suggestion to Sophie, she would not understand him for a week,

the first part of that phrase is "I desire you will not top it the Othello, brother" which goes through my head regularly for some reason.

I love the bit when Stephen and the rev. Martin head off to look at the wildlife on the Nile for an afternoon and manage to get very uncomfortable and see nothing but a moorhen, two coots and a chaffinch. I’ve had a few birding outings like that. Also, I think it’s the first time an animal bites Martin — a camel, this time.
posted by Bloxworth Snout at 1:44 PM on May 23, 2018 [3 favorites]

I missed the camel biting Martin. Definitely should have gone in the notable animal section. It definitely happens in the next book..
posted by fleacircus at 7:35 AM on May 28, 2018

Oh Ponto. DO NOT GET ATTACHED TO DOGS when reading this series; they always die.

Jack and Stephen both not having affairs with Mrs. Fielding is somewhat of an echo of them both pursuing Diana in Post Captain.

I had forgotten about both Hairabedian's death-by-shark and the explosive end of Admiral Harte; shockers both.

O'Brian fully commits to Wray-as-traitor in this one. Some interesting shifts in the narrative focus here: normally it closely tracks Jack and/or Stephen and their immediate circle. It;s surprising at the start of the book when it pulls back to overhear Lesueur and his sidekick spying on them, and more surprising still when it detaches entirely from Jack and Stephen to directly observe Lesueur and Wray's plotting.

It's very satisfying that Stephen totally soaks Wray at piquet; although Stephen has to work with and -- albeit reluctantly -- trust Wray on a professional basis, its very clear that on a personal basis he really doesn't like him much.
posted by We had a deal, Kyle at 1:19 PM on May 29, 2018 [2 favorites]

(Shark tooth in the butt probably counts as getting bit too.)

I think O'Brian's prose has settled down a bit by the time of this book, though I can't tell how much of that perception is just getting used to it. The shifts in perspective are less abrupt, there's fewer strange flights. In every book he is taking pains to re-introduce the characters. It feels like he's painting inside the lines more by now, versus the chaos in the first couple of books especially.
posted by fleacircus at 5:39 AM on May 30, 2018

Also -- for I just realized this comes at the end of this book, not the start of the next -- I found the little vignette of Jack visiting Admiral Hartley at home and finding him much reduced and, it's strongly suggested, being taken advantage of by his servants very sad and touching.

It rather reinforces the series' ongoing thesis that commanders belong at sea and are rather lost on land. And it also stands in contrast to Admiral Harte's end and suggests that -- in the morality of the books, at least -- maybe dying suddenly in action at sea is preferable to fading into a slow death on land.
posted by We had a deal, Kyle at 11:25 PM on May 30, 2018 [1 favorite]

I was having trouble picturing the chelengk and googled it, and turns out it's probably based on one given to Nelson, which was stolen in 1951 and recently recreated! Sadly couldn't find any video of it rotating, though.

If you - yes, you! - are interested in campaign furniture, you might want to check out this book by the amazing Christopher Schwarz, who is the cousin of some librarian lady. Here's a fellow building an (Intentionally!) collapsible bookcase from the book.
posted by Alvy Ampersand at 8:13 PM on October 2, 2018 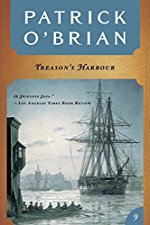