The dying words of a thief spark a madcap cross-country rush to find some treasure.


Slant: An insistently zany relic of Hollywood’s bigger-longer-louder transitional era, It’s a Mad, Mad, Mad, Mad World tried to be “the ultimate comedy” by turning the cobwebbed slapstick-chase scenario into three hours of all-star, blunt-force bedlam. Made by producer-director Stanley Kramer, and shot in the mega-widescreen format Ultra Panavision 70, at its worst it bears the self-conscious mark of a filmmaker who’d never done light entertainment before (Kramer’s initial title for the project was Something a Little Less Serious ). The end result seems more like a recreation of the D-Day invasion than a tribute to the legacy of American film comedy, notwithstanding cameo appearances by everyone from Jerry Lewis to the Three Stooges, and the efforts of a cast heavy on erstwhile TV stars (Sid Caesar, Milton Berle, Phil Silvers), often given gratingly narrow business to perform (Broadway battleship Ethel Merman sings not a note, but shouts nearly nonstop as a mother-in-law joke come numbingly to life). When shown footage of the ace work done by stunt supervisor Carey Loftin and crew before principal photography began, one of the actors presciently asked, “What do you need us for?”

And yet, despite the overall excess, about half of the film does work, mostly when the comics are permitted to bring some nuance or eccentricity to the dialogue scenes between the bouts of vehicular mayhem (both automotive and aerial) as a dozen characters race 200 miles across the California desert after witnessing the death of a hood (Jimmy Durante) who wills them $350,000 buried in a coastal park.

AV Club: It’s A Mad, Mad, Mad, Mad World, however, doesn’t know from restraint, starting with the repetition in its title. The original cut of the film reportedly clocked in at five hours, and even the final release version runs close to three; it boasts a dozen major characters split at one point across five separate plot strands, and features dozens of blink-and-miss-’em cameos, including such legends as Jerry Lewis, Jack Benny, and The Three Stooges. The result is as bloated and misshapen as it sounds, with a panoply of clashing comedic styles and as many dead spots as laughs. The sheer magnitude of the project lends it momentum, though, and there are enough giddy highs that it’s had a strong cult following ever since its release in 1963.

Empire: The film, something of an acquired taste, that took the screwball comedy formula and upped the mania to warp factor ten. Cast with a just about everyone of those comedians you recognise but can’t quite place, but kind of love all the same, the sheer momentum and rapid-fire gag count makes for an endurable three hours (did the cast’s contract’s demand a set screen time?). It’s way too wacko for its own good, but for sheer zest and the presence of two incomparable, if highly contrasting talents — Spencer Tracy and Terry-Thomas — you can forgive its many sins.

Stanley Kramer, who barely keeps a grip on his overlapping storylines, the various cars teeming with deranged passengers, constructs a loose parable on the corrupting power of greed, although, the $350,000 cache, feels a bit sparse by today’s standards. However, he was not a natural comedy director, allowing the nuttiness to ramble, and too many of the scenes to descend into an infuriating chaos with the talented cast just bellowing at one other. It is in the wild stuntwork and fraught action, dangling its precious stars over various precipitous drops, that you can thrill to its mania.

There is also no doubting the seminal effect the film has had, virtually inventing the ‘madcap’ style — screwball and then some — with everything from The Cannonball Run to Rat Race touched by its senseless delirium. Not a grand legacy, admittedly.

NYTimes: “Mad World” doesn’t lack ambition. Never have so many worked so hard for so few laughs. The silent comics Chaplin, Keaton and Lloyd aren’t the only filmmakers to whom Kramer pays homage. His movie begins in the Mojave, where Erich von Stroheim ended his legendary “Greed,” and similarly aspires to social criticism, envisioning a nation of highways populated by prime-time clowns and haunted by comic figures out of the old movies on late-night TV. Crassness is a way of life. (In a sense, “Mad World,” which was shot largely in and around Palm Springs and Los Angeles, with its grand climax staged in downtown Long Beach, is a documentary about itself.)

The Dissolve: But Mad World’s cultural impact can be felt widely outside its direct homages: in the orgiastic frenzy of automotive destruction in the similarly ubiquitous The Blues Brothers, but also in the more or less universally reviled vehicular slapstick of Steven Spielberg’s 1941 and every other film that filled the screen with choreographed, motorized mayhem. That’s part of Mad World’s mixed legacy: Many of the trends it helped popularize became, over the following decades, blights on movie comedy. The film is a cherished piece of Americana, but viewers—particularly critics—had a less-favorable attitude toward many of the stunt-fueled, car-chase-heavy, big-budget, broad, spectacle-rich slapstick comedies that followed. The Stanley Kramer-directed comedy didn’t invent any of these elements, but its success and endless second life played a big role in making them into fixtures of mainstream comedies.

RogerEbert.com on Criterion Collection release
posted by MoonOrb (12 comments total) 3 users marked this as a favorite
Extensively referenced in the Simpsons season five episode, "Homer the Vigilante."
posted by Chrysostom at 6:21 PM on June 19, 2018 [1 favorite]

I'm surprised at the negative reviews in the post.

I love this movie so much. I think a lot of that is nostalgia though. It would be on about once a year when I was a kid and we'd all watch it as a family. My parents would talk about how they saw it in "Cinemascope" when it first came out in the theaters. I still watch it from time to time though my family doesn't seem to have the same love for it that I do.

I'm usually not a fan of old movies, or old comedians, but somehow this film does it for me. Buddy Hackett, Jonathon Winters... Jim Backus asking for some "old fashioneds" in the plane. The couple trapped in the hardware store. It's just so fun.

So perhaps it doesn't hold up, perhaps if I saw it for the first time today I wouldn't like it, but I love it in the same way I love the Rudolph special and It's The Great Pumpkin, Charlie Brown, or the hot dogs from the 100 year-old diner in my town. It's comfort.
posted by bondcliff at 8:14 AM on June 20, 2018 [2 favorites]

So perhaps it doesn't hold up, perhaps if I saw it for the first time today I wouldn't like it

I saw it for the first time maybe 10 years ago and it has become an annual watch in our household!

But $350K in 1963 is worth almost $3 million today. I would go some trouble for a fifth of that. But for a tenth? A twentieth? Part of the film's sour message is that while no one can decide how much each pursuer's share will be, it keeps declining as more and more people get in on the act.
posted by ubiquity at 10:10 AM on June 20, 2018

Aside from the comedy, which I love, this movie is an incredible document of a disappearing age and one of the greatest ensemble movies of all time. The Three Stooges make their next-to-last (by three weeks) appearance on film toward the end, as well as this being the last film credits for Zasu Pitts and Don Harvey. It's within the last handful of credits for several more, including some great old horror players and a Bowery Boy or two.
posted by rhizome at 1:33 PM on June 20, 2018 [2 favorites]

I mean tastes in comedy have changed, some things certainly hold up better than others, and I was raised around live theater, which gives you kind of a tolerance for the staginess, but Jonathan Winters wrecking the gas station is a cinematic gift that keeps on giving. That's a perfect comedy routine and I won't be convinced otherwise.
posted by Phobos the Space Potato at 3:47 PM on June 20, 2018 [7 favorites]

I loved this film growing up. Me and my dad would crack up all the time watching it and cracking jokes. Paired with Streisand's, "What's Up Doc" made for some fun entertainment.
posted by jadepearl at 11:37 PM on June 20, 2018 [2 favorites]

Related anecdote: In my high school theater class we were doing a charades thing with only movie titles provided by the opposing team, where someone had to act it out and the rest of the team had to name the movie exactly right. I included this one and The Looney Looney Looney Bugs Bunny Movie (1981) for the other team to do, because I thought no way anyone would get the correct number of Mads or Looneys right. Turns out not only that, but no one else in the class had ever heard of either movie and rightly called me out on being an a-hole. (At least the teacher thought it was kind of funny.)
posted by doctornecessiter at 5:49 AM on June 21, 2018 [1 favorite]

I can't say how much a contemporary HDTV captures the glory of Ultra Panavision 70, but it's certainly worth a rewatch for the seen-it-on-a-TV-tube generation. The photography is, well, cinematic.
posted by whuppy at 1:42 PM on June 21, 2018 [1 favorite]

My father's favorite movie, hands down. Almost my entire extended family made the trip to downtown Indy for the premier, to the only theater in town with a screen wide enough (a Cinerama screen, actually) to show it in all its wide-screen glory. It was lost on very young me at the time.

When I watch it today, I find I only care to watch Spencer Tracy (who actually puts on a pretty good performance that helps balance the mayhem around him) and the don't-blink-or-you'll-miss-it cameo of Buster Keaton near the end. What I especially like about Keaton's bit is that it's...well...classic Keaton. Defiantly Keaton. He does a quick, simple silent bit that stands in stark contrast to all the yelling and screaming and crashing and slapstick going on. You can argue that, out of all the comedic talents in the film, Keaton is the only one who gets to be himself. Anyway, I always love seeing him.
posted by Thorzdad at 5:07 AM on June 22, 2018 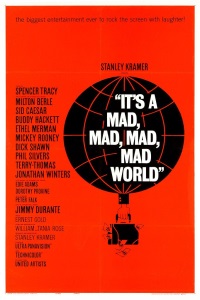