A young woman separated from her lover by war faces a life-altering decision.


Empire: Few films are more downright French than Jacques Demy's 1964 hit, famous for its thorough appropriation and reinvention of the Hollywood musical genre. Every line of dialogue from "Oh shit" to "I'm pregnant" is sung to Michel Legrand's luxurious orchestration and set in a ravishing world which is at once artificial and realistic (Demy applied dayglo paint to real locations to give them that MGM look). And it manages to combine, with a peculiarly Gallic shrug, wistful romance with resigned cynicism.In the late 1950s Cherbourg (the rainiest town in France), the beautiful Genevive (Deneuve), daughter of the proprietress of the eponymous brolly shop, loves Guy (Castelnuovo), a garage mechanic just drafted to fight in Algeria. They pledge their eternal love to the tune that was an international hit as If It Takes Forever, I Will Wait For You, but she doesn't say she's pregnant. While he's away, she enters into a marriage of convenience with a jeweller, prompting Guy, on his return, to hook up with the dutiful girl who attended his dying mother, and open an Esso garage with his inheritance.The story is deliberately slight but the style is ultimately overwhelming. Legrand's score cannily limits its range so the tunes probably could be carried by shopgirls and garage mechanics (all the voices are pleasant rather than showstopping), and even the deepest emotion is underplayed. It's hard to decide whether the film is about grand passion or the pragmatic need to settle down, but the spirited leads convey the depths of operatic emotion under the hum-along singspiel.

Roger Ebert: When she made "Umbrellas" for the French director Jacques Demy, Deneuve was 20, and her work in this film was a flowering that introduced one of the great stars of modern French cinema. The film itself was a curious experiment in which all of the words were sung; Michel Legrand wrote the wall-to-wall score, which includes not only the famous main theme and other songs, but also Demy's sung dialogue, in the style of the lines used to link passages in opera. This style would seem to suggest a work of featherweight romanticism, but "Umbrellas" is unexpectedly sad and wise, a bittersweet reflection on the way true love sometimes does not (and perhaps should not) conquer all.

Slant: Beneath the jazzy pop and aching strings of Legrand’s orchestrations is laid the brutal essence of a couple’s dissolution: War separates them, and economics makes their reunion all but impossible. Demy doesn’t bludgeon us with the ironies working against the youthful vows of fealty, and he sneaks in some mordant wit, as when Elise informs Guy that her highly eligible nurse, Madeleine (Ellen Farner), is still unmarried: “You know how well behaved she is.” Through its poignant finale, a virtual snow-globe scene in a nighttime gas station, Demy and Legrand give their unhappy love story a depth that, beneath the tinsel and Technicolor, only comes with a beating, broken heart.

Streaming on Kanopy and Filmstruck

Is The Umbrellas Of Cherbourg’s score at odds with its narrative?

Senses of Cinema: Stingin’ in the Rain: The Umbrellas of Cherbourg

The Class Tension of 'The Umbrellas of Cherbourg'

Jacques Demy’s Great Movie Musicals May Make You Love La La Land a Little Less
posted by MoonOrb (9 comments total) 3 users marked this as a favorite
When I saw this movie I had no idea that this was the origin of the song I Will Wait For You, which I'd first heard in Futurama. One of the all time great love songs.
posted by fomhar at 11:50 PM on June 20, 2018 [1 favorite]

One of the best things I got out of French class was exposure to movies, and I loved this one. I rewatched it recently with my SO and it was still so good. I suppose I should go back to see Jean de Florette again too, if my heart can take it.

May Make You Love La La Land a Little Less

Haven't read that article, and probably won't because I disagree with the headline totally. I saw so many people base their dislike of La La Land on the fact that they "expected another Singin' In The Rain" and got something else. But that's the wrong comparison. La La Land was never trying to be Singin' In The Rain. It's very distinctly a massive homage to Demy.
posted by dnash at 8:53 AM on June 21, 2018 [3 favorites]

I simply have stars in my eyes when I watch this. There are some movies I just completely give myself over to, a crazy, blind love. It coming at the end of the Musicals era helps make this the purest expression of the genre for me, and I knew I was going to love it the first minute I heard about it as a movie where EVERY LINE IS SUNG. I am allcaps for this movie and its sibling, though I have issues with Gene Kelly.
posted by rhizome at 9:46 AM on June 21, 2018 [1 favorite]

This showed at the movie theater where I worked one million years ago, and somehow I never managed to sit down and watch it from start to finish. I'm confident I've seen every minute of it, but not in the order it's supposed to be watched.

Such a glorious film and Deneuve is just superhumanly luminous.
posted by octothorpe at 6:38 PM on June 24, 2018 [2 favorites]

I really loved this, and having seen La La Land before it made me love that movie all the more. This is really good, it's very operatic, but man, what a show.
posted by Carillon at 9:33 PM on June 22 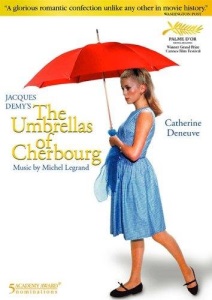