Four American soldiers stationed near a German village face death in the assault of a local girl and are defended by outside counsel Major Steve Garrett. [Content Warning].


TCM: Made between Spartacus [1960] and the Robert Aldrich Western, The Last Sunset [1961], Town Without Pity [1961] offered Douglas the chance to play a complicated character and one that risked alienating audiences. But when one thinks of Douglas's most memorable performances, it's usually the brash and unsympathetic characters that stay in the memory - boxer 'Midge' Kelly in Champion [1949], Hollywood producer Jonathan Shields in The Bad and the Beautiful [1952], reporter Chuck Tatum in Ace in the Hole [1951, aka The Big Carnival].

According to Kirk Douglas in his autobiography, The Ragman's Son, "Town Without Pity, set up by the Mirisch Company in conjunction with Bryna [Douglas' production company], was directed by Gottfried Reinhardt. I think it's the best thing he's ever done. I had enjoyed working with him on Equilibrium [a segment in the 3-part 1953 film, The Story of Three Loves], where I met Pier Angeli. Now, I was working with him and another beautiful young girl, Christine Kaufmann. Town Without Pity was a contemporary story about the problems of American troops in Germany. A girl charges four GIs with rape. I'm the army lawyer in a dilemma: in order to keep the GIs from receiving the death penalty, I have to put the girl on the witness stand and cut her to ribbons. If they let the GIs off with life in prison, I won't have to cross-examine her. I beg her father to settle for the lesser penalty, so that she won't have to testify, but he insists, and I have no choice. As a clever lawyer, I do what I have to do - rip her to shreds. [SPOILER ALERT] She breaks down and later commits suicide. One life for four. My character is devastated when he learns this. We shot the movie in Munich and in Vienna - home of Sacher torte, Wiener schnitzel, and Hitler. Vienna reminded me of an aging courtesan, with its decaying baroque buildings, enormous doors inviting theatrical entrances. The city was charming and schmaltzy, but underneath corrupt and insidious."

The small German town depicted in Town Without Pity is corrupt and insidious too and not unlike the repressive social environment that Rainer Werner Fassbinder would explore later in his films made during the rise of the New German Film movement in the late sixties. Not only is Karin (played by Christine Kaufmann) brutally violated by four drunken GIs in the film's opening but she is then subjected to vicious gossip and false accusations of her promiscuity at the rape trial by various townspeople who are resentful of her youth and beauty. Even her fiancé's mother joins in the character assassination in an effort to keep her only son dependent on her. Douglas's character, attorney Steve Garrett, quickly surmises the hypocrisy of the witnesses, turning it to his advantage while stating, "All witnesses lie a little...there's no way of measuring the incomparable nastiness of the human mind."

The film is potentially thought-provoking and disturbing but under the direction of Gottfried Reinhardt, it is more often overwrought and heavy-handed. Gene Pitney's theme song pops up constantly - on jukeboxes in bars, car and transistor radios - and in various instrumental forms arranged by composer/conductor Dimitri Tiomkin. The effect is almost comical in its constant resurfacing but it is far less intrusive than the intermittent female narration by Inge Koerner (Barbara Rutting), a tabloid newspaper reporter who is covering the case and documents the incident from its beginning to its tragic end.

Town Without Pity is, nevertheless, worth seeing for its eclectic international supporting cast which includes the lovely Christine Kaufmann in her first major role in an English language film. The German-born actress would soon become Mrs. Tony Curtis; they would meet on the set of Taras Bulba (1962) and marry soon afterwards (they divorced in 1967). In addition, versatile character actor E.G. Marshall is in fine form as the trial's prosecuting attorney and Richard Jaeckel and Frank Sutton (best known as the blustery Sgt. Carter on the TV series, Gomer Pyle, U.S.M.C.) are convincingly creepy as two of the accused. (Sample dialogue: "I was hot, in the mood, and she was there" [Jaeckel]; "It sure looked to us like she was asking for it" [Sutton].) The real scene-stealer, however, is Robert Blake who is the most guilt-ridden of the four rapists and gives a nervous, eye-darting performance as the weak link in Douglas's defense.

Variety: A picture that raises important moral and judicial questions must do so in terms of rounded, dimensional characters if it is to register with impact. Town without Pity fails in this regard.

Kirk Douglas does an able job as the defense attorney. Likewise E.G. Marshall as the prosecutor. There is an especially earnest and intense portrayal of one of the defendants by Robert Blake. The others – less prominent – are skillfully delineated by Richard Jaeckel, Frank Sutton and Mal Sondock. Christine Kaufmann, a rare combination of sensual beauty and sensitivity, handles her assignment – the victim – with sincerity and animation.

Streaming on YouTube
posted by MoonOrb (1 comment total) 2 users marked this as a favorite
I think the overriding thought I had when i was watching this was that the girl and boyfriend waited too long to leave town. I kept thinking, "Just go, just go." And then at the end when they tried... Very sad. 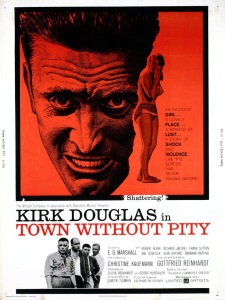