In the 1950s, fear and violence escalate as the people of Algiers fight for independence from the French government.


Roger Ebert: The strength of "The Battle of Algiers," the reason it is being viewed in the Pentagon 35 years after its making, is that it is lucid and dispassionate in its examination of the tactics of both sides. It shows the French setting up roadblocks and checkpoints between the Casbah and the European quarter. Then it follows three women, one with a child, who walk right past the checkpoints with bombs in their purses. One woman plants her bomb in a cafe and then, in a disturbing scene, watches the customers eating, drinking, smoking and talking -- customers who will soon be dead. The parallel with bombings in Israel, the U.K. and Iraq is prophetic and chilling.

AV Club: The film was enormously controversial even in its day—so much so, in fact, that it wasn’t commercially released in France until 1971, despite having received multiple Oscar nominations (not just Foreign-Language Film, but major categories like Screenplay and Director). Imagine, then, how its frank depiction of Algeria’s struggle for independence—consisting of horrifically violent skirmishes between Muslim guerrilla fighters and a largely white military—will play in a country where nearly half of the population explicitly or tacitly supports Donald Trump’s proposal to ban Muslims from entering the U.S. While technically brilliant and consistently engrossing, The Battle Of Algiers is not easy to embrace on political grounds; it neither demonizes nor lionizes either side of the conflict, aiming for just-the-ugly facts objectivity. Nobody who sees it is likely to feel comforted, or even vindicated. The emotion it most frequently and fervently inspires is sorrow.

The Guardian: Famously, the Pentagon arranged a special in-house screening in 2003, evidently fascinated by exactly the same qualities that have mesmerised the movie's followers elsewhere: its icy candour on the subjects of counter-terrorism, counter-insurgency, and the vital importance of torture in eliciting information.

Those torture scenes are laid out in montage for us without any self-conscious emotional affect or drama; they include blowtorching the suspect's naked torso, waterboarding, and clipping electrodes to the earlobes before hand-cranking the voltage. These scenes are presented without any of the internal humanising or dramatising conflict that would be considered vital now: they do indeed look almost like a military training film. Another sort of director, possessed of a more conventional liberal scruple, might have felt the need to show a torturer's inner pain or the torturee's hidden backstory. But Pontecorvo shows them in terms of strategy.

The Nation: No matter who is being destroyed, we shudder at the tenor of the events. We take little satisfaction at the “triumph” of one side or the other in the mutual slaughter. (We even pity the poor cops.) In one of the cafés we see a crowd of Europeans (French) at their drinks and a baby licking an ice cream cone. When the place is blown up we remember that child. We are outraged at the wantonness of this “senseless murder.”

We of course are equally infuriated by the French when we witness the terrible pain inflicted on the Algerian prisoners from whom their captors are determined to elicit information. The variety and ingenuity of the means employed add to the horror of the procedures We admire the cool austerity, the intelligence and soldierly self-discipline of the French colonel but we realize that he is a killer. (He points out that he was a member of the underground against the Nazis and is thus no Fascist.) We respect the terrorist leaders for their determination, courage and steely pragmatism, but they are as ruthless as the French. Even in its most violent scenes the film indulges in neither sentimentality nor delight in cruelty. It contains none of the sadism common to so many pictures presented as entertainment.

NPR: But the film's Algerian producer and co-star Saadi Yacef says it is inappropriate to see the violence on screen through our current prism of terrorism. "What the film is showing is really different for me. Here you have people who are in a struggle against colonialism. Their struggle is to get the colonial power out of their country. To me this has a far greater difference than some terrorist who sets off a bomb or kills children in the name of having an Islamic State. It is not a human being who goes into a school and kills children. These are not human beings," he says. Applying the film's empathy for insurgents to today's context would be irresponsible and fatal, he says.

The Middle East and North Africa have fundamentally changed from the anti-colonial uprisings of the 1950s and 1960s to a new age of Islamist politics and violence. While Gillo Pontecorvo's landmark film may draw our minds to contemporary unrest, Saadi Yacef says the film has endured because it is a great work of realist cinema. Pontecorvo was already one of the most celebrated filmmakers in Europe when he was approached by Yacef to make the movie. His collaborators and cast were mostly non-actors who had lived through the real Battle of Algiers. The film emerged from a rare creative and cross-cultural alchemy between Europe and North Africa. Fifty years after the broader context that clearly gave The Battle of Algiers urgency and currency in its day, the film now stands on its own as a work of cinema. Now, technology has allowed a new generation to see the film in a version that is as close as possible to the one audiences saw in 1966 ... and to experience this landmark piece of cinema about resistance on its own terms.

Senses of Cinema: In countless interviews, director Gillo Pontecorvo spoke about the “dictatorship of truth” informing his approach to The Battle of Algiers. By this, he meant a number of things. He meant the rejection of the propagandist script about the Front de Libération Nationale (FLN)’s resistance to the French occupation of Algeria that was written by the film’s future producer Saadi Yacef – former FLN military commander in Algiers, who had published a memoir of his experiences – and demanding a more balanced and nuanced treatment of the conflict. He meant continuing in the Italian Neo-Realist tradition of commemorating resistance to totalitarian power, in particular those forgotten or marginalised by history (such as the petty-criminal-turned-Islamist-and-terrorist, Ali la Pointe), using a raw visual style and cast of non-professionals to present a “reality” to counter the lies, misinformation and absences of that totalitarian power (here, as broadcast by the dominant, conservative French media). He meant imitating the visual style of newsreels and television news, as a recognisably “authentic” representation of recent historical events.

However, the “truth of dictatorship” would be nearer the mark. The Battle of Algiers is the film equivalent of a commissioned portrait – Yacef sought out Pontecorvo and his screenwriter Franco Solinas when he learned of their earlier, abortive research trip to Algeria near the end of the war. After rejecting their first treatment – a Eurocentric vehicle for Paul Newman – Yacef worked on the script throughout the shooting, later claiming that he took an acting role as a version of himself in order to keep an eye on the production. It was Yacef who insisted that key sequences be shot in their original locations, and who accessed financial and logistical support from the new Algerian government. This makes The Battle of Algiers at once a portrait, a history painting and a war memorial – a state-sanctioned, hegemonic, ideologically acceptable reconstruction of history.

Slant: The Battle of Algiers is a political tract that understands itself also as a cinematic exercise. A fitting complement to Pontecorvo’s penetrating compositions and DP Marcello Gatti’s nimble camera work, Ennio Morricone’s score echoes through the cramped Casbah avenues like a call to arms. The pouncing musical notes crescendo during moments of mass tumult, and together all three artists perform a balancing act of epic proportions; a complex historical moment is recreated from the gritty ground up. Politicians are expectedly nonexistent in the constantly evolving social world of the film, their voices only heard via radio or transmitter dictating orders that are as ignorant as they are abrasive. They’re the true inglorious bastards.

The Pentagon's Film Festival: A primer for The Battle of Algiers.

Prescient Tense: Re-creating the carnage of fifties Algeria—bombings, assassinations, police torture—The Battle of Algiers is as relevant today as it was in 1965.
posted by MoonOrb (3 comments total) 8 users marked this as a favorite
Friendly Fire podcast coverage of "Battle of Algiers."
posted by drezdn at 5:59 AM on June 29, 2018 [1 favorite]

I haven’t seen this for years, but remember how powerfully hard it was to watch. Scenes from it stuck with me vividly today. Thanks for the reminder.
posted by purenitrous at 8:47 PM on July 3, 2018

I just caught up with it. What a really interesting film. It's shot so close to Algerian independence, I believe just 3-4 years, that really makes it feel less a history and more of a reliving of events for the actors.
posted by Carillon at 10:20 PM on May 7, 2022 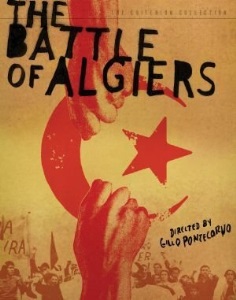