The wife and mistress of a cruel headmaster conspire to kill him; after the murder is committed, his corpse disappears, and strange events begin to plague the two women.


Slant: Good thrillers usually suggest a world of perversity that the proper plot only partially touches on—a realm of unease that might play to our most paranoid suspicions of the danger inherent in everyday life. Henri-Georges Clouzot’s Diabolique, often and famously cited as an influence on Psycho, is such a film. Diabolique, like many of Clouzot’s movies, is really a caustic, despairing character study masquerading as a thriller. It conjures an atmosphere of suffocating rot that’s so palpable, in fact, that the murder plot is in many ways its least disturbing element.

As Terrence Rafferty writes in his excellent essay that serves as the liner notes for this Criterion edition of the film, Clouzot’s attention to the neorealist chaos of the environment lends the thriller tropes an unusual credibility that can’t even really be found in much Hitchcock. Hitchcock was an expressionist, while Clouzot was somehow a realist and expressionist in roughly disconcertingly equal measure. The boarding school is portrayed with the stressed and rumble-ready textures of a real school, yet it also appears to exist in a realm of otherworldly myth that’s particularly embodied by the creepy pool into which Christina and Nicole eventually decide to dump Michel’s body.

Empire: Following the outdoor suspense of The Wages Of Fear, Henri-Georges Clouzot directs with a gray, claustrophobic cruelty that briefly made him seem a serious rival to Alfred Hitchcock. After drawing on Pierre Boileau and Thomas Narcejac, authors of the book that Les Diaboliques is based on, for Vertigo, Hitchcock made Psycho explicitly to reclaim his ‘Master Of Suspense’ title, and took care to follow Clouzot by setting his most horrible scene in the bathroom and building up to a twist ending. It has several strong moments of physical horror (one trick with contact lenses is still creepy), but roots its nastiness in everyday cruelty — as when Michel forces his wife to eat a disgusting school dinner — and the down-at-heel, despair-haunted school setting.

Roger Ebert: The famous plot of the movie usually deceives first-time viewers, at least up to a point. The final revelations are somewhat disappointing, but Clouzot doesn't linger over them. The most disturbing elements of the movie are implied, not seen, in the seedy air of the teachers, all of whom have seen better days and at least one of whom should probably be in jail.

The movie was made by Signoret in her heyday as a fleshier, blowsier French version of Marilyn Monroe. She makes a dramatic contrast to the petite Vera Clouzot, the director's wife; he often frames little Christina with Nicole and Michael looming over her.

There is the possibility, just hinted at, that Nicole may have lesbian designs on Christina. And there is a shabby depravity in the way Christina is so defeated by her husband that she lets him continue to run her school (and abuse her) even after he starts an open affair with the Signoret character.

The movie has fun with the usual whodunit details: The split-second timetables, and the sleepy old guard who must open the gates to let anyone in or out of the school grounds. The Inspector also amuses himself reconstructing timetables and quizzing a small student who seems to see and hear impossible things. Then comes the ending, inspired by "Gaslight," in which a woman is either going mad, or nothing is as it seems. "Diabolique" is so well constructed that even today it works on its intended level - up until, say, the last 30 seconds.

Senses of Cinema: In essence, Les Diaboliques is one of the greatest suspense films of all time. The film mingles aspects of moral decrepitude, revenge, a well-crafted ballet of appearance and reality, and the intricacies of the evil mind and how it never takes a rest. These themes come together in an eloquent and elegant cinematic/literary tribute to the craftiness of the fox and the wisdom and patience of the hare. I’ve always thought of Les Diaboliques as an Aesopian yarn of the hunter and the hunted, where the latter leads the expedition into attrition.

The lyrically mesmerising beauty of this film has to do with our witnessing just how the hare outfoxes the fox. In other words, how the fox outfoxes itself. Just how much the tables are turned on the hunter by its prey; this is the staple technique of this wonderful film. Don’t think that I will spoil it for you, for even if one wanted to, Les Diaboliques’ plot is far from easy to give away. Besides, when this magnificent film was first released, the director and the production company virtually begged moviegoers not to reveal the ending. I will honour this request.

At its core, Les Diaboliques is a story of avarice, a love triangle and the degree of evil craftiness that fuels each. Yet it is not a simple task to figure out just who is the most heinous character in this tale of moral torment. The psychological suspense of the film forces us to enter into the mind and soul of the characters. Les Diaboliques is not an experience for the lazy. Evil is subtle. The most effective perpetrator is always found quietly plotting and calculating behind the scenes. The writers of Les Diaboliques capture the meaning and import of evil like few films in this genre ever have.

Streaming on YouTube with English subtitles, but with these annoying little pop up ads that come up now and then.
posted by MoonOrb (3 comments total) 2 users marked this as a favorite
Love this movie! I'm a big admirer of Clouzot in general and can't help wondering what he might have done if his career hadn't been so plagued by terrible luck.

Basically, he starts out in Berlin doing French translation of German films, but gets fired because of his close ties with Jewish producers. So he goes back to Paris, where he immediately is bedridden with tuberculosis, and about the time he's able to work again, the Germans... follow him home as it were.

The only place to work in the film industry under the occupation was the German-controlled Continental Films, where he directed a movie called Le Corbeau (The Raven) based on an historical incident in a small French town where an anonymous figure starts publicly posting letters revealing all the townspeople's various darkest secrets. Le Corbeau managed to piss off both the French resistance, who saw it as a propaganda attack on the pettiness and general character flaws of the French people, and the Germans, who saw it as a warning not to inform on your neighbors. Despite the film's great success in France, Continental fired him before it was released and he didn't work for the rest of the war. After the war, he was promptly tried for collaboration and banned from making films for life. It took a couple years before the ban was lifted, given the support Clouzot received from various major French cultural figures.

So then he has his brief golden age, but it was all too short. He was viewed as irrelevant and obsolete by the French New Wave. His wife, who he used in most of his major films (Christina here) died of a heart attack, and Clouzot himself suffered from major depression (understandably) and serious health problems that sidelined him and killed project after project. He died in 1977 at age 69.

The setting is a French provincial school for boys; the headmaster's wife (Vera Clouzot) and mistress (Simone Signoret) conspire to murder him. It sounds simple, but the characters seem fearfully knowing, and there are undertones of strange, tainted pleasures and punishments. According to the director, Henri-Georges Clouzot, "I sought only to amuse myself and the little child who sleeps in all our hearts-the child who hides her head under the bedcovers and begs, 'Daddy, Daddy, frighten me.'" Clouzot does it, all right; his Grand Guignol techniques are so calculatedly grisly that they seem silly, yet they succeed in making one feel queasy and sordid and scared. (Some people may feel too queasy to find the film really pleasurable.) With Paul Meurisse as the malignant headmaster, and Charles Vanel, Noel Roquevert, and Michel Serrault. From a novel by Boileau and Narcejac. In French. 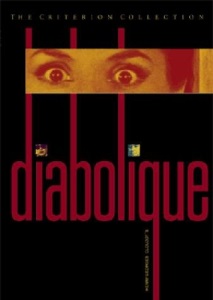