The final conflict between the Travelers and the Army of the 12 Monkeys.
posted by porpoise (8 comments total) 1 user marked this as a favorite
Overall, it was an entertaining 4 seasons of tele.

Goines really should have been/ is the star/ focus of the series.

The gunfights were horrible throughout, but the martial arts weren't bad and got pretty respectable the second half of the series.

Looks like the writers had at least an outline of the ending and had salted previous seasons with a couple of little 'inexplicables' that were answered at the end.

I thought that they kind of fixed the time travel shenanigans a little bit in Season 3, but the writers just shrugged 'eh, its so broken, lets just say someone wants to break it on purpose.'

The ending was definitely 'a magician did it' but was satisfying.

The series, in the end, fully splintered the show from the movie (who's theme was if time travel was real or was James Cole just mentally divergent) and into James Cole was able to survive time travel because his mother - Jones' kid - was a time traveler... but wait, Cole's original mother was the Witness' daughter? So, uh, yeah.

Also, the virus was released by the Travelers - and preventing Cole from the virus pandemic timeline from kidnapping Cassandra Railly pre-virus release results in no virus release (?).

And key players retain future memories in the uninterferred-with 2013.

So, it was entertaining but in retrospect completely nuts.

I don't think you can actually finish a time travel story without some kind of causality fuckup. That's OK, at least this finished instead of being cancelled (looking at you, Timeless). Fun show, had its weak spots (Olivia was unrelentingly, cartoonishly evil) but overall pretty good for the kind of budget put into it. And they killed Hitler, which was strangely funny.
posted by axiom at 9:10 PM on July 8, 2018 [1 favorite]

Good that this is getting wrapped up with some actual ending rather than just dropped with with weirdness of the third season totally ambiguous, it'll make a rewatch sometime much more satisfying.
posted by sammyo at 7:16 AM on July 9, 2018 [1 favorite]

Agree strongly - having a planned ending (especially for a time-travel adjacent show) is infinitely preferable to an unexpected one.

Not sure that I completely agree that a time travel travel story can conclude without a causality fuckup - or that a causaility fuckup ending could be written to make sense and there are consequences. But yeah, not interested in fighting.

Forgot to mention how much I loved the costumes (other than for 'The Daughters' - yeah, lots of the non-Hero background costumes kind of sucked), especially the period ones.

In the later seasons, even the post-plague rags looked good/ made sense.

Unrelentingly I'm 100% behind... cartoonish, well, she is trying to destroy Time. Goines being the one to warn everyone (crazy knows crazy) and taking on the Cassandria complex was good writing.

As opposed to Cassie being tempted and the whole "it must finish or the process will revert entirely."

This next thing is completely covered under 'and a wizard did it' but Old Jenifer Goines was entertaining as hell but is a complete non-starter continuity wise. But Entertaining. As. Hell.

If I was Brad Pitt - I'd send her flowers and a nice note. Reinterpretted the heck out of the Goines character, and executed like a mf boss. I could see Pitt doing an old Jeffry Goines, but it wouldn't have been worth it physically to get Pitt into believable shape.
posted by porpoise at 9:48 PM on July 9, 2018

When I heard this was to be the final season, I was worried that it would be a slog to get through episodes I felt bound to watch more by duty (and the sunk cost fallacy) than by enjoyment. I am happy to say those fears were unfounded. In fact, I was only going to watch "Demons" (S4E08, the fourth-to-last episode, the one where they go back to 1491 to complete the Weapon) tonight and get to bed at a reasonable time. Joke's on me. Once I watched that I was hooked and I had to watch the final three as well. I liked that they tied the plague back in after all this time, and having a shooting at an airport being a key event was a nice callback to the movie which the series had so wildly diverged from.

Great acting all around, and yes, especially from Emily Hampshire. I'm not sure how well the plot holds together if you look at it with a magnifying glass, but I found the ending quite satisfying, and was entertained by the show overall.
posted by DevilsAdvocate at 10:27 PM on August 13, 2018 [1 favorite]

I just finished binging this, and while it got kind of "okay, yeah, we're just going to fling weird shit at the wall and see what sticks" from somewhere in season 3 through to this, it was entertaining and fun. The "Time of My Life" music cue managed to get me to literally guffaw out loud. Back at the beginning of the season, using the "Leverage" music bit for the reality of Jennifer's heist was also excellent music. And, yeah, great to bring the plague plot back and putting it in the airport was excellent.
posted by rmd1023 at 4:42 PM on May 10, 2020 [1 favorite]

I binged this over two successive weekends (having found it on Canadian Prime just before that), and would not recommend that - the continual failures of the Dream Team (until the final few eps) get oppressive when viewed in quick succession. I was beginning to experience deja vu for Dark at a couple of points, but stuck with it and I'm glad I did. The time travel shenanigans mostly held together, the character beats were earned, and we finally get a real m/m (nonsexual, though) couple as a main focus.

Minor points:
-Deacon was the Negan that I wanted Negan to be.
-I also thought it was hilarious that they killed Hitler. The showrunners know their tropes.
-Does anybody *ever* run out of ammo except for dramatic effect?
posted by Mogur at 8:18 AM on August 8, 2021

Cole saying "initiate splinter sequence" in that sad little voice just about broke my heart.
posted by Mogur at 7:31 AM on August 9, 2021 [1 favorite] 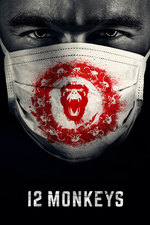