"Keladry of Mindelan is the first girl who dares to take advantage of a new rule in Tortall—one that allows females to train for knighthood. After years in the Yamani Islands, she knows that women can be warriors, and now that she’s returned home, Kel is determined to achieve her goal. She believes she is ready for the traditional hazing and grueling schedule of a page. But standing in Kel’s way is Lord Wyldon. The training master is dead set against girls becoming knights. He says she must pass a one-year trial that no male page has ever had to endure. It’s just one more way to separate Kel from her fellow trainees. But she is not to be underestimated. She will fight to succeed, even when the test is unfair."
posted by Eyebrows McGee (9 comments total) 5 users marked this as a favorite
This is my favorite quartet BY FAR, although I often skip First Test to get right to the good stuff in Page. (Also, ugh, the current covers on the US editions of the books are very, uh, post-apocalyptic!) Kelandry, the calm, controlled team player is so different from other Pierce heroines (who tend to be hot-tempered, impulsive, solo performers), and I love her so much.

I tend to be towards the hot-tempered and impulsive end of the scale myself and I often wonder a) if I love Kelandry so much because she's so different from me and b) how I might have turned out differently if I'd read her when I was in junior high instead of as an adult.
posted by Eyebrows McGee at 8:58 PM on July 15, 2018 [4 favorites]

I loved these books! As much as I loved Alanna and Daine, it was so refreshing to have a Tortall heroine who isn't special or chosen or gods-touched from day 1. Kel is stubborn and determined, she's not conventionally feminine, a lot of the things she has to do don't come naturally to her and she never has the option of a magical solution to her problems. She just grits her teeth and does the work.

She doesn't reject femininity, either; it made me really happy that she chose to wear dresses sometimes, as a pointed reminder that yeah, she is The Girl, what are you gonna do about it? And there's grown-up politics happening in the background that are messy and believable and frustrating. Maybe my favorite Pierce heroine, after Alanna.
posted by nonasuch at 5:52 AM on July 16, 2018 [1 favorite]

Kel is the Hufflepuff we all want to be. I started out with Protector of the Small and while the rest of the Tortall books are good, they aren't as good. Kel isn't blessed with magic, but she works hard and is smart, so when you see her performing courageous and/or tactical actions, you believe that she's capable of them. I love that whole genre of "training your whole life and then doing it" books, so these books nearly got me drunk. My only regret is that I didn't read it earlier in life.

And, uh, I'd be doing every Tortall reader a disservice if I didn't link to bracketyjack's Lady Knight Volant, which is the cap on the Tortall books that we'll never see in canon. Feel free to throw me out for reccing on a fanfare thread, but... jeepers. It's very good. The author did their homework.
posted by snerson at 1:31 PM on July 16, 2018 [3 favorites]

I recently re-read this for the first time since reading it as a teenager. I really enjoyed it - I love the whole theme of "gradually becoming more skilled through dogged steady work", it's so satisfying to read. I love the part when she realises she has been given a weighted lance by the other pages, and just determinedly keeps using it, laying the groundwork for being absolutely awesome at lance (lancing? Oh, jousting, I guess). Kel's sense of justice and deep goodness make this such a pleasurable read. Once I've re-read the whole series I am definitely going to check out the Lady Knight Volant fic linked above, thanks snerson!
posted by fever-trees at 8:46 PM on July 16, 2018 [1 favorite]

Easily my favorite Tortall series, and yeah, probably because I am nothing like Kel and wonder what could have been if I'd been able to read these at a more malleable age.

It's great that we get a whole book of Kel's first year, setting everything up with a much more solid-feeling background than we had with Alanna (blink and she's already a knight) or Daine (fewer years pass, but different setting and supporting characters in each book.)

This is the one I was most pleased to give copies of to my students. Kel's struggles are just so damned satisfying, since you see what she does to overcome her problems, and they're largely things real-world people can try. Don't know how hard a push-up is? That's testable right now, unlike learning to use magic.

I also love that while Kel largely manages to keep her temper in check while she'd be very justified in losing it, she's keeping calm to achieve her goals. Her friends who get angry on her behalf make it clear that being angry is not a moral flaw, and that it's totally reasonable to resent the wildly unfair treatment she's subjected to. She's not Sara Crewe (who is also delightful, but a lot less believable.)

Alanna disguising herself as a boy is fun and dramatic, but it's good to see some coverage of the likely logistics of being the first acknowledged girl page (er, probationer). Having the Wildcat show up to act as chaperone for the overnight trip captured the awkwardness of being the only girl and being singled out for special arrangements, along with the relief of having an adult ally to rely on.
posted by asperity at 9:22 AM on July 17, 2018 [2 favorites]

This was my first Tortall series; I think I read The Immortals after/in between waiting for Squire and Lady Knight to come out, and then didn't even get around to Song of the Lioness until last year!

Re-reading it after SotL makes me appreciate the book so much more for the reasons everyone else mentioned above: we've basically just got pure grit from our main character, and very well thought out logistics and discussions of what all being a lady page would actually entail. I remember being really happy when either Squire or Lady Knight I think mentioned her packing up for the field and matter-of-factly described her packing menstruation supplies.

Something that's a lot more obvious on this first re-read from middle school or so: Kel's kindness towards animals saves the day! The sparrows that she feeds lead her to the Spidern nest; and then her rescuing the kittens lets her understand the Spidern's attacks and save her friends.

Also, I think Wyldon improves as well re-reading as an adult. Especially in the scenes when he's helping her with heights (in the way that he knows how), he leans more towards "Tough but fair" as opposed to just "Unfair meanie out to get our heroine."
posted by damayanti at 2:37 PM on July 17, 2018 [2 favorites]

I always wondered what Wyldon had seen before that made him treat Kel's fear of heights as being a totally normal fear that any soldier might have to work to overcome, rather than a Girl Problem. He was certainly ready to latch onto any other weakness Kel showed, especially early on.

Wyldon does get points from me for his last (?) conversation with Kel, though that's in Lady Knight, I think. He didn't think he'd been fair. Interesting character, and more so since we get to see him over more than just the first couple of books in which he's important to the plot. He can join Rikash Moonsword in the small but colorful Tortall Nuanced Antagonists Club. (Rule #1: No Rogers Allowed.)
posted by asperity at 3:48 PM on July 17, 2018 [3 favorites]

I, too, loved this series, largely because of the "keep griding away toward your goals and you can achieve them" aspect. And I think I remember a scene where Kel gets frustrated because people mistook her calmness for a lack of caring? That resonated with me, too, because I think I was more Kel-like in personality and felt that people sometimes thought I was disengaged or boring because of it...
posted by TwoStride at 5:51 PM on July 17, 2018 [1 favorite]

I always wondered what Wyldon had seen before that made him treat Kel's fear of heights as being a totally normal fear that any soldier might have to work to overcome, rather than a Girl Problem.

I thought that was interesting too. That he so quickly saw it for what it was and went right into problem solving, without derailing into his usual, "you don't belong here" nonsense. Especially when he often doesn't seem to see things, like the bullying in weapons class or her room being ransacked. I also find it fascinating that her friends think he's bullying her with the height acclimation. Though maybe they've gotten more sensitive to bullying since she was apparently the first person to point out it was a bad thing.

I thought Wyldon showed his side a little better at the end too, when he said that she could stay, but that she surely wouldn't want to, know that she knew what it was like. Thinking that families would want more for their girls isn't fabulous, but is better than just hating girls, which is the kind of villain he could've been.

I think one of my favorite parts is at the very beginning of this book, when she gets the letter and goes off to think and decides that it isn't fair and she won't do it. It makes me happy that she knew that and could stand up for herself to that extent, at age ten. And her changing her mind, because she so badly needed the skills, worked for me too. Because she kept her eyes on the prize and didn't waver from learning the skills she needed and working as hard as she could on them.
posted by Margalo Epps at 8:18 PM on July 19, 2018 [2 favorites] 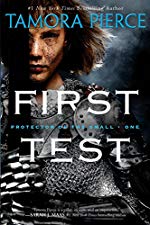