A stubborn teenager enlists the help of a tough U.S. Marshal to track down her father's murderer.


[Trailer] [IMDB] [Wikipedia] [Rotten Tomatoes] [TV Tropes] ...this isn't a Coen Brothers film in the sense that we usually use those words. It's not eccentric, quirky, wry or flaky. It's as if these two men, who have devised some of the most original films of our time, reached a point where they decided to coast on the sheer pleasure of good old straightforward artistry. This is like Iggy Pop singing “My Funny Valentine,” which he does very well. So let me praise it for what it is, a splendid Western. Roger Ebert

It could be the Coens’ most straightforward film, but it’s also one of their best. Time Out This is the brothers’ most accessible film in years, but in their eagerness to do justice to Charles Portis’ novel they have obscured their kinetic, oddball brand of yarn-spinning. Not entirely, perhaps, but enough to niggle. The result is a film that is never less than riveting, but safer than we’ve come to expect from this most accomplished and prolific filmmaking duo. Little White Lies

The subject of the Coens’ True Grit is that True Grit is the kind of story we tell ourselves, and the kind we want to see told. They’re right, of course, as the movie’s success, with critics and at the box office, has proven; but it’s precisely the movie’s toothless, mildly jokey sentimentality that pulls the rug out from under any significance that the Coen brothers might locate in that fact. The New Yorker
posted by Ten Cold Hot Dogs (8 comments total) 3 users marked this as a favorite
OK, if I can piggyback a little, as I wonder every time a remake appears on my radar: watch the original first, or the remake?
posted by rhizome at 4:13 PM on October 20, 2018 [1 favorite]

I question your premise. It is not a remake; it is another adaptation of the source material (and a much superior one at that, to my thinking). The 1969 version is studio product, and it is telling that John Wayne, playing an old, out-of-shape, over-the-hill gunfighter, plays the role wearing a toupee and a girdle.
posted by ricochet biscuit at 5:34 PM on October 20, 2018 [8 favorites]

This film came out on DVD the week my first kid was born so I watched it about four times in the first few days after his birth and really have fond memories of it. I even liked Matt Damon in it. And I've watched a lot of lesser movies since just because they featured Hailee Steinfeld.
posted by annathea at 9:01 AM on October 21, 2018 [1 favorite]

I really liked it and would say you can't go wrong watching either adaptation. It's not as strong as the John Wayne one but it is quite good.
posted by Carillon at 3:51 PM on October 21, 2018 [2 favorites]

I grew up on the John Wayne version and can say without an ounce of hesitation that the 2010 version is much better. Maddie is better, Rooster is better, the whole damn thing is better.
posted by teleri025 at 10:35 AM on October 23, 2018 [3 favorites]

I remember being blown away by Hailee Steinfeld's performance when I saw this in the theater. I've only seen it one other time but that was probably 5 years ago. But I loved how her toughness really seemed to come from within - the world she lived in required it, even at such a young age. But that even if she'd grown up in a different environment, she probably still would not put up with anyone's shit. And it's not that she had no vulnerability but that her focus was elsewhere. She had a job to do. I also liked that their relationship wasn't solely a surrogate parent/child one but that it was almost more as peers despite the age difference. He really respected her as a person. As I'm typing this, I'm really hoping this movie version that exists in my head canon is still true and that a rewatch won't undo it.
posted by acidnova at 12:18 PM on October 23, 2018 [2 favorites]

I think that Ebert's the one who got it most right. Politico's hot-take title--"What the Coen Brothers look like when they're not winking"--is wrong by at least half; their first movie, Blood Simple, wasn't winking at anyone, unless you mistake M. Emmet Walsh's signature eye twitch for a wink, and ditto for Miller's Crossing, No Country for Old Men, hell, even Barton Fink; there's some humor in that, but at its heart it's as serious and deadly as cancer. I also puzzle at assertions that the film is somehow "toothless" or "safer" (the latter much more applicable to many more films than a remake of the most popular film of John Wayne's later career, and the source of his only Oscar).

I really can't judge it against the original, which I've only seen bits and pieces of, and the sequel to the original (which I have seen) wasn't much of a much. This version was just fine, though, and the climactic scenes of Rooster riding until his horse collapses to save Mattie and then carrying her is one of the most indelible scenes of any Western that I've ever seen.
posted by Halloween Jack at 2:07 PM on October 24, 2018 [2 favorites] 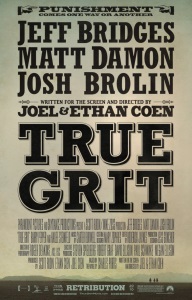