A young soldier in Vietnam faces a moral crisis when confronted with the horrors of war and the duality of man.


[Trailer] [IMDB] [IMFDB] [Wikipedia] [Rotten Tomatoes] [TV Tropes] [Soundtrack playlist] This is the ultimate work of witness, something which has the authenticity of documentary and yet the vibrancy and originality of art. Oliver Stone seems to me to be the almost miraculous survivor, someone who went to Vietnam to do one thing and managed to survive in order to do another. I am not sure which is his greater achievement, getting the film made in such a shallow and hostile environment or making so remarkable a movie. But in the process he has done something more important than all the war's historians; he has given us something which is not only real, but which lives. The New York Times

Stone has avoided most of the cliches of war films and in one astonishing sequence... he has so flown in the face of movie cliches as to make you grin with subversive delight. The LA Times I know that Platoon is being acclaimed for its realism, and I expect to be chastened for being a woman finding fault with a war film. But I’ve probably seen as much combat as most of the men saying, “This is how war is.” Pauline Kael for The New Yorker

Despite its violence and barrage of realistically dirty language, Platoon could have used some... ferociousness, starkness and unpretentiousness. The artistic veneer Stone applies, along with the simpy narration provided for Sheen in the way of letters to his grandmother, detract significantly from the work’s immediacy. Variety

miscellany
posted by Ten Cold Hot Dogs (1 comment total)
It's been a while since I've actually read anything of Kael's, and that review of Platoon may be the reminder why: it's a choppy, sloppy piece of writing, often praising a particular bit or aspect of the film before pulling back and saying, no, it's not good, as if she promised someone that she wouldn't like it, but can't quite justify why. Even the end of the review (quoted above) is puzzling: whomever "most of the men" are, she definitely hasn't seen as much combat as Stone, a fact she spent the first two paragraphs of her review establishing.

Anyway, I thought that Platoon was very good back in the day, and wonder how it would hold up now. IMO, his best two films were this and Wall Street, at least of the ones that I've seen (I gave up after Natural Born Killers, which was deeply wretched); it's kind of weird to think that they both starred the awful Charlie Sheen, who never did anything else nearly as good.
posted by Halloween Jack at 6:16 PM on October 20, 2018 [1 favorite] 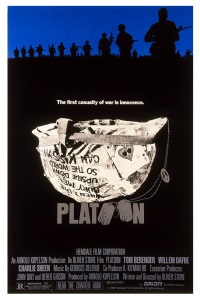