In the nineteenth book of the twenty book series, the disgusting British Empire flexes its cannon, Carbonari, and Cainites to thwart the Hashashin machinations of Napoléon, who is, if anything, abler aft far Elba. Lionesses are ended; cousins(?) clasp hands; drawers hit the deck; long-legged Naseby consumes Dupuytren's contraction; Montpellier snakes make poor pets; Killick snaps a tusk on a third class boy; Poll Skeeping makes loblolly girl; Pippin gets pipped; and all the livelong Deys don't amount to many as the mission goes from the Rock to Kasbah to the battle royale on Fortnight Island.


Presuming on his status as captain’s steward he had given Billy Green, armourer’s mate, a shove as he went aft along the gangway, a shove that Green had returned with such force that Killick plunged between the skid-beams to the deck below, falling on two men at work there and scattering their tools; and when Killick directed a reproof at Green, who replied ‘You and your God-damned unicorn’s horn’, they set about him with jerks and cuffs and one threatened him with a marlin-spike, calling him ‘abject reptile’ and desiring him to pipe down and stop his gob for an unlucky, unlucky son of a rancid bitch.


• Jo Walton's reread. She finds it unsatisfactory and it's her least favorite book.
• O'Brian's wife Mary Wicksteed-Tolstoy died in the same year this novel was published. It seems obvious this informed the events of the novel but there's not really any breakdowns of it I can find.
• A kind of weird marketing guy talking about O'Brian's house.
• Some forum chatter.
• When Stephen is going around Algeria he likes to hold his watch up to his ear, probably because he's so used to the ship's bells. I thought it was cute.
• Kindle shows the first paragraph here has a lot of highlighters but not the second, weird:

‘... Listen, Amos: did you ever read an author who said “Never underestimate a woman’s capacity for jealousy, however illogical or inconsistent or indeed self-defeating”?’
‘I do not think so: but the notion is fairly wide-spread among those who think of men and women as belonging to two different nations; and who wish to be profound.’

• I am just going to suggest the possibility that Mrs. Williams caused the crash by saying unforgivable at just the wrong time.
• HMS Diamond Rock gets its due.

At this point Killick came in with an improbable pile of shirts in his arms, kept there by his pointed chin – linen to be aired in the galley when the fires were drawn. He had been washing, ironing and goffering (where appropriate) all Jack’s and Stephen’s shirts, neck-cloths, handkerchiefs, waistcoats, drawers and duck trousers, and polishing the great cabin’s silver to an unearthly brilliance in the hope of forgiveness: but from the great cabin to the galley and even to ship’s heads he was still looked upon with a sour, disappointed dislike: and none of the women, nor even the ship’s boys, called him Mr Killick any more.
But even in a pitch of distress that had cut his appetite, his pleasure in tobacco and his sleep, his intense curiosity lingered on and now he asked why the doctors were swearing so.
‘Well, Killick,’ said Poll Skeeping. ‘I am surprised you should not know, being it was your so-called Hand of Glory, that was to make us all so rich.’
‘Oh no,’ whispered Killick.

From elsewhere I saw this link, Around the world in a square rigged ship has some silent footage of life aboard a four masted ship in 1938-9. I suspect that some of the footage has been antiqued for some reason.
posted by fleacircus at 9:26 PM on November 16, 2018

cw to above video: sailors mistreating animals
posted by fleacircus at 9:29 PM on November 16, 2018

Yeah. He really wastes NO TIME in having Statler and Waldorf there bring us up-to-date on all the things he decided should occur in-between books.

I am pretty much with Jo Walton in the "Diana deserved better than being offed before the flyleaf" camp, but it is also very typical of him that significant events happen off-page and reverberate from there into on-page conversations.

I liked the gossipy conspiracy theory that Stranraer's physicians had slow-poisoned him. It's just plausible enough to make me wonder for a moment if maybe Stephen did help Jack out a bit by quietly offing a recalcitrant admiral. But no, I think Stephen views the doctor/patient relationship as far too sacred for that.
posted by We had a deal, Kyle at 7:04 PM on December 7, 2018 [1 favorite]

Oh yeah I can't imagine Stephen would do that for Jack, or approve even of euthanasia in particular. I feel like O'Brian is being a little cagey with diagnoses in this one, also for the ambassador.. Maybe I was just not picking up on the subtext.
posted by fleacircus at 11:04 PM on December 10, 2018

reverberate from there into on-page conversations

I'm about halfway through now and oddly this hasn't happened much. Stephen's a bit more mopey than usual and everyone's somewhat walking on eggshells around him trying to not mention it -- Jack is mortified at himself for calling Stephen's composition "terribly sad" -- but mostly Diana's death has gone un-remarked-upon.

Stephen has a dream about Christine Woods which ends when he wakes to the ship performing a full salute, which I am definitely choosing to interpret as euphemistic.
posted by We had a deal, Kyle at 12:05 PM on December 11, 2018 [1 favorite]

Having finished it, I'm with Jo Walton: this is an unsatisfying book.

Mostly I think because it feels so much like a rerun. Another political intrigue amongst the Deys; another temporary sidekick for Stephen; another land journey with attendant wildlife and weather; another pair of rescued children; another fractious admiral; another treasure-ship to chase; another questionable prize. It's a Greatest Hits album of a book.

But also: it feels reluctant. Like O'Brian really wants to end the series, can't quite bring himself to do so, and is taking out his frustration on the reader. We get another comfortably-familiar yarn, but the monkey's-paw price is that he abruptly kills off two of our favorite characters. He gets to the end of the war, finally, but still he has to end this book with a hook for the next one: um, they go surveying again, I guess? It doesn't feel like he's having much fun writing these any more.
posted by We had a deal, Kyle at 1:16 PM on December 16, 2018 [1 favorite]

I do agree that the fall of Killick is the best sub-plot. That guilty "Oh no." Are we are to suspect that it was Killick and/or his mates that surreptitiously drank the Hand's spirits of wine? I think we are.

I like Poll Skeeping, but Stephen's "women? in the service?" surprise pretty much mirrors ours as readers. YOU SPENT 19 BOOKS TELLING US HOW MASCULINE THE SERVICE IS; you wrote plots, whole books even, about how terribly destabilizing a female presence on board can be; and now suddenly you're all oh, but of course there were always women around. Say what now?

This book's reminder that asepsis hadn't really been invented yet: Harris the butcher proudly sharpening Stephen's largest catlet with "an emulsion of spit and oil." Stephen is impressed: "If ever I have to operate on you, I shall do so with an instrument of your own preparing."
posted by We had a deal, Kyle at 12:47 PM on December 17, 2018

Yah it's far too late for that retcon. I wonder what research brought it on.
posted by fleacircus at 8:09 PM on December 17, 2018 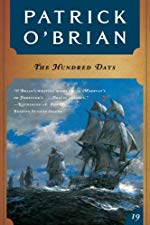