An extended adaptation of Haruki Murakami’s short story Barn Burning, based on William Faulkner’s story of the same name, Burning follows a quiet young man named Jong-su (Yoo Ah-in), who reconnects with his old classmate Hae-mi (Jeon Jong-seo) and starts to fall for her. But when a well-traveled, charismatic rich guy named Ben (Steven Yeun) comes into the picture and swallows all of Hae-mi’s attention, Jong-su starts to chip away at Ben’s flawless veneer.


(Above quote also from this article) The Ringer: Steven Yeun’s Smile Will Fool You
Yeun wonders whether his Korean is so unnaturally advanced that Korean Americans who aren’t fluent in Korean will think he’s butchering the language. Native speakers would be impressed, though. “I’ve heard people say Ben’s Korean is better than Jong-su and Hae-mi’s Korean,” he says. “But that’s because theirs is more natural whereas Ben is more exacting with his words. Those are all specific directions and decisions we both made. Director Lee wanted to juxtapose this person being unequivocally Korean but also show that there’s something weird about him that you can’t explain. And he knew that people knowing my face might create that dissonance. He’s a genius.”

Slate: Steven Yeun on Why He Had to Go to South Korea to Feel at Home as an Actor
I wasn’t supposed to be in this role. If you’re packaging this in Korea, they’re not thinking about me. They already had someone lined up, and suddenly there was an open space, and [Lee] was like, “Here’s an American Korean person, and if I can help him get to a full Korean embodiment of his character, his inherent American-ness will create that dissonance that makes you feel like he’s ‘other’ [in Korean society].” He’s so Korean, but he’s not at all, you know what I mean?

Vulture: Can Burning Get South Korea Its First Oscar Nomination?

Vulture: Steven Yeun Makes His Leading-Man Korean Film Debut in Burning
There is so much fascinating, underplayed tension running through Burning — oddly, I found myself put in mind of Elon Musk stepping out with art-pop singer-songwriter Grimes at the Met Ball last week. I don’t claim to know anything about the inner life of that relationship, but the perception of the rich vampirizing youth — not directly biologically or physically or financially, but emotionally — is incredibly compelling.

The Atlantic: How Burning Captures the Toll of Extreme Inequality in South Korea

Vogue: Burning Is the New Thriller About Toxic Masculinity That You Didn’t Know You Needed
posted by FJT (5 comments total) 4 users marked this as a favorite
Thank you for this post. I just saw the movie on Thanksgiving, and am still blown away by it. It works on so many levels; a psychological thriller and mystery, an exploration of toxic masculinity, the economic hardship of being a young person trying to make a life in South Korea contrasted against a wealthy few ("we have so many Gatsbys in Korea"). Easily could watch this again, to capture nuances missed the first time around.
posted by Atrahasis at 11:39 PM on November 24, 2018 [1 favorite]

Stunning movie. The class inequality is amazing. The girl at the final party is clearly lower class than the other people there, it's enough to really make you wonder about Ben's tastes. The ambiguity of this film is delicious.
posted by Catblack at 8:12 PM on January 30, 2019 [2 favorites]

I really liked this film, and it kept churning in my brain after I saw it. And usually I'm quite eager to offer up my thoughts on a film, but this is one of those pieces of media where I'm not sure if my interpretations are correct or if they're just faulty conclusions based on my own perspective and blindspots. So, yeah, I think this film did it's job putting you in, uh, Yoo's headspace.

Maybe I should watch it again?

On that note, it's available for streaming for free on Hoopla, a streaming service that some public libraries subscribe too. If your library is a part of it, you will just need an email and a library card to sign up.
posted by FJT at 1:32 PM on February 26, 2019 [3 favorites]

What a great film. There was quite a contrast between the two halves - a really well-sketched piece on young love and jealousy, turning into a Hitchcockian suspense thriller for the second half. It slightly reminded me of “In The Bedroom”, in terms of structure. For my money, I found the first half stronger, but I don’t have any complaints - the whole thing was beautifully made, and it’s still bouncing around my head several days after watching it. And (what I took to be) its key messages about power and class and age and status were equally effective throughout both halves.

And usually I'm quite eager to offer up my thoughts on a film, but this is one of those pieces of media where I'm not sure if my interpretations are correct or if they're just faulty conclusions based on my own perspective and blindspots.

Even putting aside any weightier themes and possible meaning(s), just in terms of the plot: We’re led to one particular understanding - the mysterious disappearance, the supposed pyromania that appears to be a metaphor for some other activity (“What’s a metaphor?” / “Ask Jongsu”), the phonecall from Haemi, the lack of contact, the trophy drawer, the adopted cat, the next girlfriend / victim all lined up.

But we see all of this circumstantial evidence from Jongsu’s perspective. And he’s the jilted ex.

It could well be that Haemi was (quite reasonably) ignoring him after he confessed his love for her to Ben at the farm... and then called her a whore to her face. If Ben had then dumped her (or she him) she may have decided to get a new number. Especially with Jongsu’s constant calls. Haemi had “the big hunger” for life, and is at an age where she’s reinventing herself. She may well have found both male characters too limited and constraining. What does that leave us with?

She left the freebie watch when she left Ben; or he stole it as a trophy (but of their sexual relationship, rather than her murder). She butt-dialed Jongsu, then he kept calling obsessively calling her until she changed her number. She left home for a period of weeks without taking her pink suitcase. She didn’t have a cat in the first place - as far as we know, Jongsu never saw or heard it, so the cat could have been Haemi’s equivalent of an imaginary tangerine, for him (price of the prank: one bag of dry catfood and two bowls). Ben’s new cat allowed itself to be picked up by Jongsu. Ben has a new girlfriend who’s younger than him and also seems easily impressed by his wealth and apparent sophistication (so, he’s a creep and he has a type). And Ben once went and looked at a reservoir and also once said some weird stuff while stoned about burning down a greenhouse, which he didn’t appear to have done. From Jongsu’s perspective, the perspective we see, it isn’t just that Ben is a sleazy asshole who stole his girl - it adds up to something deeply sinister. And with the addition of the mysterious well - which has nothing to do with Ben, at all, and quite possibly doesn’t even exist - we’re given the sneaking suspicion that Haemi might be buried there, for Jongsu to recover. And all of that (plus maybe some remaining jealousy, perhaps??) is enough for Jongsu to murder Ben, who comes to meet him because he thought Jongsu was bringing Haemi. (That would be a weird trap to walk into, completely unprepared, were Ben really Haemi’s murderer.)

I still tend towards the first, presumably intended reading. But we’re given a partial account of the evidence against an unsympathetic character, and all the evidence is highly circumstantial. I don’t think it’s a reach to imagine that Jongsu could have killed an innocent man.
posted by chappell, ambrose at 12:33 PM on April 6, 2019 [4 favorites]

price of the prank: one bag of dry catfood and two bowls

And a litterbox with little poops. Jong-su also visits the place twice I think, would he not notice the food had not been eaten? Of course the existence of the cat he never sees doesn't really matter because we still don't know if the cat in the garage is the same cat. But who did wind up with her cat? Would Hae-mi really ghost her previous life that completely? Maybe...

I really loved the ambiguity. The mother remembering a well, and the detail that it was a dry well, seems strong; but she doesn't quite seem reliable, plus, how would Hae-mi's sister and mother not know there was a dry well on their property. I didn't get the idea that Hae-mi might be buried there, but saw it as just a very confounding factor, did he save the girl or not?

I tend think that Ben didn't do it and this is a story of jealousy, but I like that both interpretations seem possible and strong. I kinda dislike cheap ambiguity in a story but this movie isn't that.
posted by fleacircus at 5:56 AM on September 10, 2019 [3 favorites] 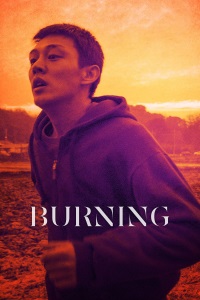